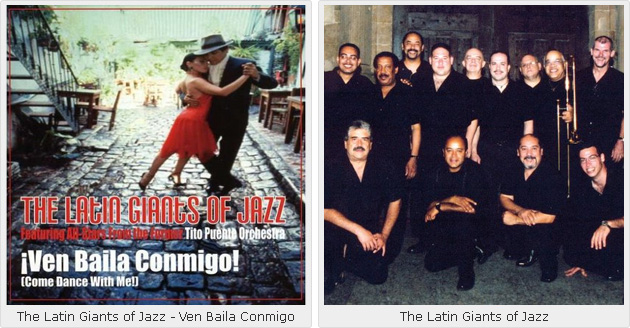 It is a daunting task to play in the idioms of jazz, salsa and mambo in a big band setting without the spirit of El Rey, Tito Puente in attendance. But timbalero and musical director, Jose Madera acquits himself with distinction on “Ven Baila Conmigo,” this record that explodes with that special energy that Puente imparted to his excursions when he was alive. It is not a tribute to El Rey. It does not purport to be, but then every time that music like this is played the homage, ceremonial or otherwise is inevitable. Puente was that kind of giant. But these musicians acquit themselves as “giants” as well.

It is significant that some of the fine musicians who played in Puente’s later bands are part of this orchestra. Reynaldo Jorge, Sonny Bravo Jose Madera and Frankie Vazquez, to name some of those musicians bring a singular energy to this record. If it were a tribute then it would be one of the finest to El Rey. Of course the best homage that anyone could pay Puente is to play the music he loved with the same soul and spirit so that it is impossible to keep still. You must either get up and dance, or preferably both. And there are plenty of these moments on this record. Frankie Vazquez leads the coros with his powerful and soulful tenor and he is – without tremolo – in line to continue where the great vocalists of Latin music left off.

Soloists such as trumpeters Kevin Bryan and Guido Gonzalez deal blazing choruses on “Lo Que Traigo Es Salsa” and “Cannology” respectively. Alto saxophonist Bobby Porcelli and former Compadre of El Rey tenorman, Mitch Frohman also acquit themselves with aplomb. Pete Miranda growls as he drives the heat of the mambo way up on “Cookin’ The Mambo”. John Walsh plays majestically just behind the beat, then racing ahead and clear as a bell on an outstanding track, “Si El Mar Se Volviera Ron,” a classic mambo. Ignacio Piñeiro’s “La Batidora Meneadora,” is another shining example of the Giants’ ability to keep the energy high. This particular arrangement by “Perico” Ortiz is particularly magnificent.

There appear to be only high-points on this record. Certainly this is not uncommon when such a fine band of men get together to play the music that celebrates life in all its warm glory. With such synergy, it is hoped that this ensemble would stick with it and produce a lot more exciting music.

The Latin Giants of Jazz on the web: www.latingiants.com