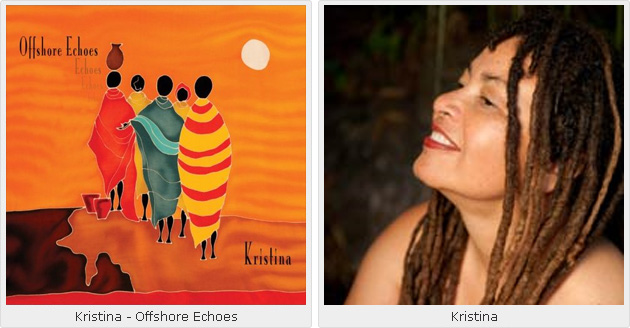 A female vocalist with a low vocal spectrum is not supposed to sound as joyful as Kristina does on Offshore Echoes. And she sounds joyful no matter what she sings. Many singers would sound solemn. However, Kristina, being the wonderful practitioner of the vocal arts that she is gives a fine account of herself. Not only is she a versatile vocalist in terms of how many languages she can actually sing with accurate diction, but to be able to communicate the soul of the song, no matter what that language… And this is truly special. The secret is probably the fact that Kristina is three: part Cherokee, part African and part German. Not that this specific cultural mixture matter, but that she has a soul dipped in the spirits of the ancients of African and Native American and German gives her fearless courage and a true sense of alegria.

Offshore Echoes is one of the most infectiously happy records of the year. The amazing driving capoeira samba rhythm of “Ilu Ayé” is a perfect case in point as it spins like a colorful top of ecstacy. “Take me to Aruanda” is no less ebullient and Kristina has a particularly sassy way of letting quarter tones slide by with majestic glissandi here. “Cherokee,” that incomparable song that has brought so much spirited joy through the ages–especially since the legendary Charlie Parker recast it–gets a further refurbishment. Kristina can claim to have sung this one with true soul, being Cherokee herself. In fact the vocalist may have turned this version into one of those songs that renters the vocabulary of modern music in much the same way as “Wichitai-to” did after Jane Bunnett recast the John Pepper classic.

Kristina goes native once again in the beautiful landó, the Afro-Peruvian, “No Valentin.” This is a significant vocal as it is equivalent to a delta blues in the US and Kristina renders her version with sublime authenticity. Her tribute to Sarah Vaughan, “Tenderly” may be the most definitive version since “Sassy” did hers. It is by this song that Kristina shows why she may possibly be the true successor to Vaughan herself. Kristina has that smokey hush that combines with her often-authoritative inflection and undulating phrasing that sets her apart and recalls the great “Sassy” herself. In “The 59th Street Bridge Song (Feelin’ Groovy),” which Kristina sings in a swaggering reggae/calypso rhythm and shows just how uncannily close to Vaughan she can come in all her soulful splendour.

The music on the record is made all the more memorable by the magnificent artists who appear with Kristina. The instrumental ensemble is exquisite as is the choral backing–especially on “Ilu Ayé.” Then there is the outstanding percussion work of John Santos and Michaelle Goerlitz as well as the brass and woodwinds including Wayne Wallace and Mary Fettig, who shine bright.

Offshore Echoes is an experience that far outlives the echoes of the notes that hover in the air long after the last note is played and sung.

[audio:http://www.latinjazznet.com/audio/reviews/Kristina-The-Performer.mp3|titles=Track 8 – The Performer by Kristina – From the CD “Offshore Echoes”]

Kristina on the web: www.kristinasgroove.com