The nine daughters born of Zeus and Mnemosyne, water nymphs awash in springs of Helicon and Pieris; the nine muses who ignite the impulse to adorn every word, every brush-stroke and every musical note have been awoken again.

This time not only did they inhabit every stroke of the chisel as it etched a sketch in an Ionic or Doric column; or in every pluck of the string of a harp, but also in the poetry and music of the of the Provençal and then from age to age… The Muses have now been awakened by the astonishing music of this fine record, Alchemya while inhabiting their invisible doppelgängers in the heat and dust of Andalucía. Here they spin and pirouette; leap and flutter as they dance to life, deeply immersed in the duende of the music; here they are the inspiration for the musics’ artful protagonist, Juan Carmona. The Flamenco guitarist was born in France, seduced by the Roma peoples of Spain; travelled there to immerse himself in a music that echoed in his soul and delved so deep that he became his music; this very music. This is what is heard on the near mystical charts on this record, so exquisite and deep that it can also be heard in the depths of the heart’s ear; and even deeper, in the challenger depths of the soul.

There can be no alchemy without the quintessential alchemist: Juan Carmona, who pursues his muses amidst the Roma; a people mysteriously woven into the very fabric of the arts. Here cultures collide: Africa, India, Hungary, Romania and all Europe. Duende is unleashed from the souls of many men; artists every one of them pouring precious elements into that cauldron at the centre of the guitar, bubbling and toiling to produce the magical and mystical existential notes that reflect the gentle and joyous weeping of the soul. Mr. Carmona begins his journey in the heart of Moorish Africa. “Africando” is a report of this odyssey. The chart is composed of a myriad phrases, aimed like arrows from the heart of that part of the continent; swooping in and out of Moorish ululations. Each melodious phrase—for the melodic architecture of “Africando” is born of a series of phrases—is unfurled with tempered poetry, a sacred utterance of breathtaking beauty that gives rise to the next and then the next… and so on, until the music gives rise to a chant and then the lyric is vocalised, echoed in the thunder of the bass and in the hollow slap of the cajón. All this while hearty hand claps egg on the spectral dancer, who pirouettes in parabolic whorls, mesmerised by the rhythm of the music. 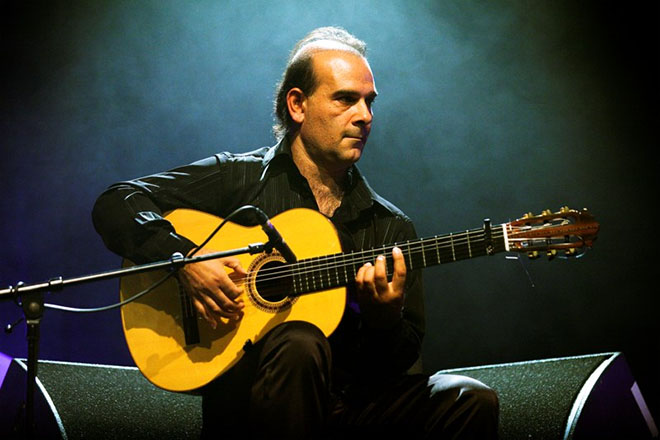 There is much of this too in “Altanaà” and in “Santiago City;” in “Sirena,” “Miami” and in “Sombra En La Pared”. But here too, Mr. Carmona rings in the changes with exquisite angularity. In every elaborate gesture, revealed in the utterly beautiful dynamic of his fret-board; in every conceivable motif unfurled like a fragrant rose Mr. Carmona plays each note as if his life raced from beginning to end. The gasp uttered at the end of each phrase is not the artist’s, but the listener’s as he is left breathless by the speed and beauty of the playing. This is no mere Juan Carmona, but the veritable alchemist melded from the duende of Spain, in the African-American idiom of jazz and in the swaggering ethic of African Caribbean tumbao and in the numberless rhythms of India. Mr. Carmona, born of France is indeed of the village of the world. His take on Chucho Valdes’ “Mambo Influenciado” is breathtaking to behold, from the murmurings of vocalist and pianist Carmelo de Cuba who traces the genesis of the polyrhythmic fantasy from Africa to Cuba and then some, to the plump and radiant notes of Sylvian Luc redolent in the metaphor of jazz, this song traces a veritable odyssey across the topography of music across the globe. Sylvian Luc must receive special mention here as well as for his solo on “Creer En La Primavera”. His phrases are begotten of a beguiling and otherworldly musical vocabulary. His prodigious inventions and chord sequences come from places where few musicians and fewer guitarists dare to go. Mr. Luc matches Juan Carmona note for note and phrase for phrase. In the end each guitarist reigns supreme as each song sublimates in show of beauty and awesome force.

Also from the realm of the untranslatable is the deeply melancholic and beautiful “No Espero Nada” a lament like no other. The vocalist and Cantador, El Negri, embodies the very spirit of the forgotten and the forlorn. He howls; he bays the moon and bares his beautiful and damned soul as he reveals what it means to be bereft of everything material and spiritual as well. Again, it is Juan Carmona who is otherworldly and beautiful on “Altanaà” as he alternates between guitar and sitar, that gorgeous Indian instrument on which he can play melody and evoke harmony all at the same time. Also deserving special mention in guitarist Larry Coryell, who plays with passion, grace and fire on “Sirena,” evocative, once again, of those mythic beings that dwells in that spectral fourth dimension from where much of the music seems to emerge. Here again, it is Juan Carmona, who plays as if he dwelt in a near sacred space, from where much of his music comes in a polyphony designed to beguile and entrance the soul of the listener as any art with duende; that beautiful infection of that part of the human aura hidden even from the most erudite and stout of heart. Such is the magical music of Alchemya, a record full of mystery and magic that distils the essence of both in one contiguous whole.

Juan Carmona on the web: juancarmona.com/