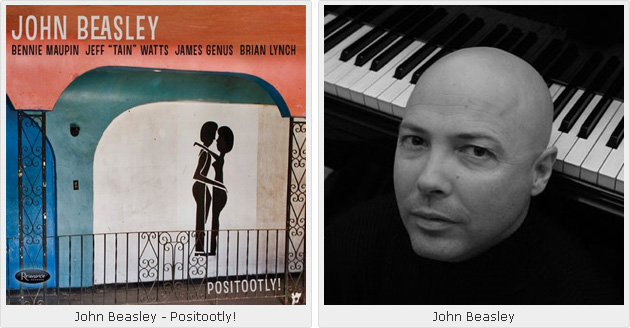 John Beasley’s Positootly! is awash with Lydian modes. That and it is clear that Beasley has listened carefully to Herbie Hancock and Wayne Shorter. However, he is also a singular pianist who is chirpy and breaks up his dazzling melodic runs with staccato perfunctory harmonic statements that then bend the music in another surprising direction. Thus he is never predictable and always makes a new surprise flow through the tips of his fingers that take the keyboard to task every once and awhile.

Not usually gentle–or gruff, for that matter– Beasley prefers the direct approach to turn of phrase and will not waste time with niceties. On this record, he is often heard to comp restlessly when bassist James Genus or drummer, Jeff “Tain” Watts find a groove and start to get a bit cute. Nevertheless, Beasley is generous too and offers plenty of room for his cohorts to express themselves in towering solo when the song demands it. Otherwise, his compositions are short and tight and leave only wiggle room for bursting out, literally. This makes the ones on this record more urgent and breathtaking–as in “Caddo Bayou” and “Positootly!”

Beasley is a clever and bold interpreter of the familiar. He is willing to take chances. This is how “Dindi” came to be played in 5/4 time, with barely a hint of Tom Jobim’s bossa nova rhythm. However, the song does sound entirely charming and refreshing. The romance of “Dindi” is more sensuous than platonic as Jobim and Sinatra both had her. The other “Latin” track is Astor Piazolla’s nueva tango, “Tanguedia III.” Tango, unlike many other musical dance forms is more graceful and formal and while Beasley pays tribute to the authentic, he creates a puckish air about the piece, speeding up and slowing down the music, while maintaining a certain raffish swagger that is utterly charming.

The finest work on the record is, of course the music that he lives and breathes, body and soul and that is the music of the South, with its gris-gris and gumbo flavor. “Caddo Bayou” and “Positootly!” are two of his finest pieces to date. “Shatita Boom Boom” (Club Desire)” is a flaming track as is “Black Thunder,” dedicated to the legendary drummer, Elvin Jones. “Elle” comes as a surprise, not because the rest of the music is full of rhythmic fire, but somehow the tenderness embodied by the ballad is not something that was expected from this pianist. Nevertheless, “Elle” is a fine piece, with a soulful soprano saxophone solo from Bennie Maupin.

Brian Lynch has his moment of glory is yet to happen. On “So Tired”, it still is Bennie Maupin, who swaggers through his tenor solo. “The Eight Winds” provides the space for Brian Lynch to stretch and that too on a fast blues that is played at breakneck speed. “Hope… Arkansas” is another warm-blooded piece that shows a tender side to the pianist and this appears to be the perfect note on which to end a fine record.

John Beasley has learnt well from the last glory days of Miles Davis’ funky groove. With a little help from friends, Maupin and the restrained Munyungo Jackson, Beasley has pulled a memorable follow-up to his earlier Resonance record, Letter to Herbie. Only this record need not be reverential to a mentor and so can be more versatile and free to express the heart and soul of this ever-growing pianist.

John Beasley on the web: www.beasleymusic.com