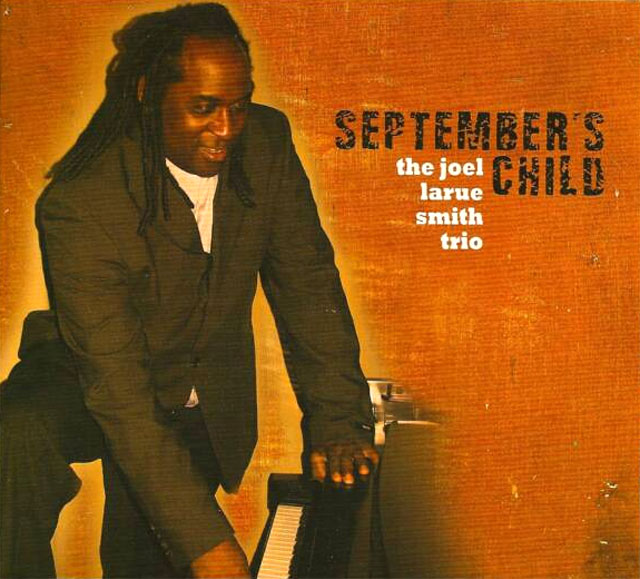 There is indeed a deep connection between Africa, the Americas, the Caribbean and Europe. As September’s Child unfolds the sweeping musical journey begins as well, as does the harmonic and rhythmic connection that enjoins continents. It is the remarkable nature of Joel LaRue Smith’s pianism that becomes the binding glue of it all.

Joel LaRue Smith Trio’s art celebrates the triumphant spirit. To that extent it would be safe to say that were he making a deep bluesy record, it would be superb for he is moved by the soul. Were he to be part of a symphonic interpretation he would read the music as perfectly as it was intended to be read. And so in making this tribute to the Latin side of his soul LaRue Smith is never off the mark. An inner rhythmic clave guides LaRue Smith’s expedition. His music on this his debut record is sinewy, spectacularly sensual and joyfully spirited. Not just his interpretations of the Latin classics “Barandanga” by Armando Peraza, “Mambo Inn,” by Mario Bauzá “Obsesión,” by Pedro Flores, but more especially the music that he has written specially for this date.

“El Mensajero,” features some glorious, contrapuntal playing with Fernando Huergo, who is superbly inventive throughout the record. Huergo is a fine bassist, who can lead when he has to and also play a supportive role with inspired interplay – as he exhibits on the track in question. The soloist in Huergo is superbly on display, for instance, on “Que Preciosa,” where Huergo appears to find an unlimited source of ideas to drive the harmonics of the track. Drummer, Renato Malavasi, for his part, is able to keep the clave grounded when the need arises and disengage from the obvious with subtle changes in rhythmic coloring. The trio pushes even a traditional sort of Latin form – as in “Mambo Inn” into a truly contemporary context.

Perhaps the most impressive aspect of this record is the writing. Joel LaRue Smith is able to compose with delightful complexity. And at the end of the day he brings surprising ideas into his music, but taking creative leaps with harmonic changes. His use of diminished measures in “Narrow Escape” is a fine example. This is something Wayne Shorter would do with remarkable results. It appears that LaRue Smith has some fine antecedents and may be indicating a clear influence of Shorter himself. Co-incidentally, his uncovering “Fall,” a real gem from Wayne Shorter himself is one of the high points of the record.

September’s Child is a guileless foray into the complex world of Latin rhythms. And it is this very spiritual journey that makes it an enduring musical document, something that is likely to stay in the mind and heart long after the echo of the last notes fade into the air.