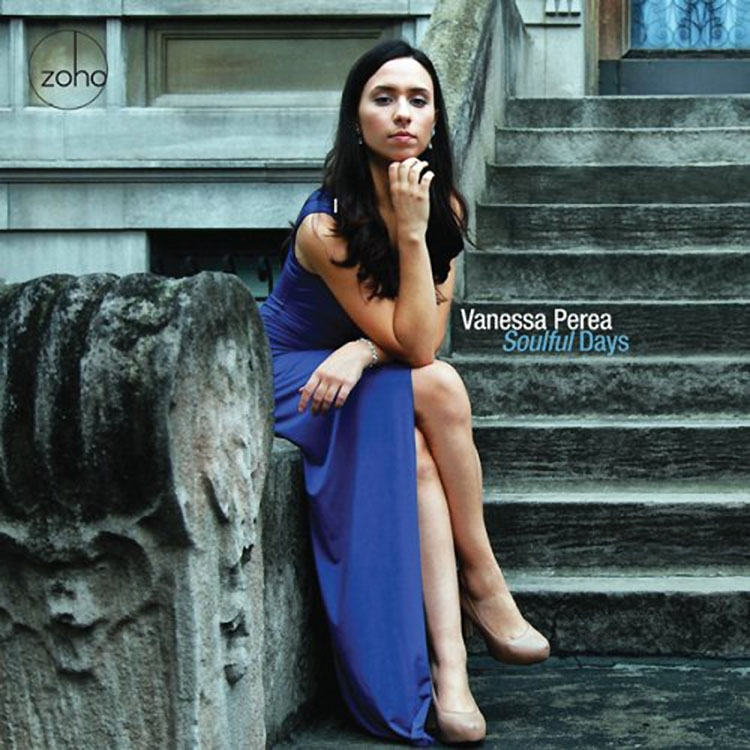 Vanessa Perea might have a particular flair for the theatrical. This is suggested by the manner of her phrasing. Ms. Perea is able to pace herself and tell stories with each song she sings. In the case of this album, Soulful Days her range is grand and her ability to hold high notes as well as low ones is so utterly convincing that she could easily be on stage telling her story on Broadway, for instance. She also sings to the limits of the instrumentation which is small in this case and it would be interesting to listen to and watch her perform with a much bigger ensemble, with a big band. It is almost certain that she could clearly take on the size of even a full orchestra. She has that presence. Here, stripped down to one trombone with the trumpet for company there is a part of the ear that misses an ensemble of Ellingtonian proportions although Ms. Perea sometimes enunciates the lyric suggesting in the manner of another woodwind or a brass instrument creating breathtaking counterpoint for those with which she is already singing wordlessly or with words. And these are wonderful arrangements made it would seem, to fit Ms. Perea’s personality as well. She takes on the songs as if they were written for her as well.

As William Blake put it, fire will find its form, Soulful Days is a perfect convergence of content and form. Woodwind, brass and piano conjure the playful fantasy world of the music in which Vanessa Perea becomes a minstrel who almost slips back in time to the date and time of the characters’ encounters in these folk tales. Ms. Perea’s tremendous vocalising of Anthony Newley and Lesley Bricusse’s “Who Can I Turn To” is a case where the lyric makes the heartbreak and elemental loneliness come hauntingly alive. In “Jim” there is another beautiful rendition of a song that is emotively strong and requires the vocal efforts to be more evocative than in a simple song. Ms. Perea draws out her word-endings with beautiful anguish in the classic “Tenderly” and it is here that she seems to suggest the narrative palette of Broadway. Her Portuguese is also on form as she sings Antonio Carlos Jobim’s “Triste” and Caetano Veloso’s “Luz do Sol”. This is a greater test of strength and ability in a manner of speaking as vocal skills must be matched here with the ability to dream in another language and this Ms. Perea does very convincingly. But there is a surprise waiting in store for the listener and it is in none of the above.

Vanessa Perea outdoes herself as she is pitted against the trombone of Robert Edwards on Bud Powell’s classic bebop chart, “Celia”. The singer carries herself through magnificently here and it is almost worth the entire album just to get to her scatting solo on this wonderful track. Bebop, as Sheila Jordan tells her pupils in a master class, requires just as much emotion as it does speed. In the case of this Bud Powell song Ms. Perea displays this with such monumental control that it is almost too tempting to suggest, at the risk of being too presumptuous, perhaps a bebop recording next.

Track List: Devil May Care; Soulful Days (These Are Soulful Days); Who Can I Turn To; Too Marvelous For Words; Jim; December Blue (Martha’s Prize); Triste: Let Me Tell You; Luz do Sol; Tenderly; Celia

Vanessa Perea’s voice is strong in the tradition of the masters. With a rare ability to sing diverse styles at the highest degree of authenticity, beautiful sound and sweeping range, Vanessa shows a confidence and poise beyond her years. Miss Perea was born on September 24, 1987 in Glenridge, New Jersey to a Cuban mother and Colombian father. She grew up listening to salsa tunes on her father’s record player and practically learned to dance before she could walk. At 6 she was already singing in the church choir and by high school, piano & voice lessons led to performances in school musicals and choirs. In 2010 she received a BA in Music Education from New Jersey City University. There she studied with Grammy Nominated Jazz Vocalist, Roseanna Vitro, and internationally acclaimed soprano, Donna Zapola-Connolly. Read more…