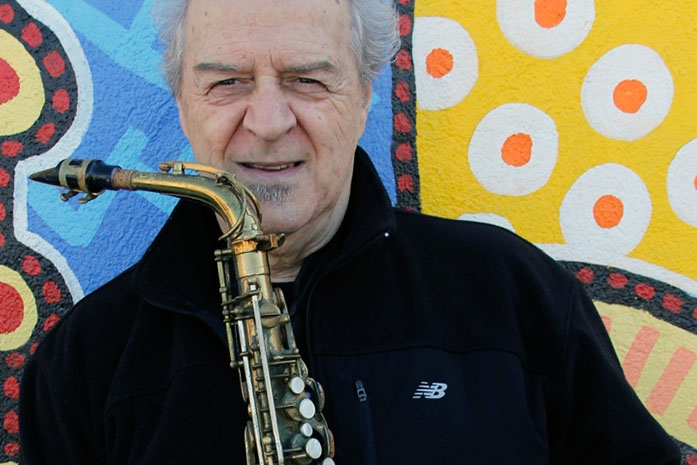 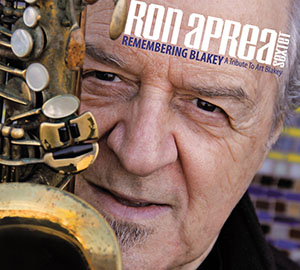 Most, if not all, homages to a personage would have at least one aspect of the one being honored. In the case of a musician, that would mean either a piece of music, or musicians from among his or her various ensembles would be present to tell a part of the story that glorifies the one in whose honour the music was being made. However, in the case of Ron Aprea’s Remembering Blakey: A Tribute to Art Blakey neither applies. The recording does not include a song nor does the ensemble include a member of one of Mr. Blakey’s legendary Jazz Messengers. But it delights in the same hard-rhythm-driving bop that Mr. Blakey so magnificently played in every one of his Jazz Messengers groups. And the same visceral energy that drove the Messengers to make their special kind of music is what propels this ensemble. Moreover, even though the drummer on this date, Vince Cherico, does not play with the manic explosive bass drum bombs that Mr. Blakey deployed as if to punctuate his musical lines, Mr. Cherico has a bright and mighty locomotion that might have charmed Mr. Blakey.

What then is the highlight of this record? What qualifies it to pay homage to Mr. Blakey, a man who brought light where darkness abounded? The unrelenting energy with which the music is made is one of the compelling reasons it would be eminently suited to such a project. And then it is the playing of its main characters. The leader, Ron Aprea, plays his alto as if he has demon on his tail. His enunciation is wild and caterwauling when he plays on the racier songs, such as “Flown the Coop” and then there is the primal wail on moodier and slower-paced charts such as “My Foolish Heart” and “Lover Man”. The latter might have also been rendered as a choice tribute to Billie Holiday. The trumpeter, Joe Magnarelli, long since admired for his enormous sound and untameable tone, and another shoe-in for such a project turns on the stars during his soli and of course during the ensemble passages. He is particularly outstanding on “Latino” a vehicle that seems to have been created just for him. Of course, happily the chart was also shared with drummer Vince Cherico, who displays how much he can swing and with how much swagger he can shuffle as well on this chart.

Vince Cherico and the big honk of alto saxophonist Ron Aprea share the spoils of the elemental blues charts: “In A Minor Funk”, which they do only after Joe Magnarelli has had his say and on “Transition Blues” another wild indigo blue chart and this features the moan of the saxophonist once again. And the indelible standard, “Cherokee” is played with smoking intensity, once again as if the devil were on the tail of the alto saxophonist. Again, all of the charts have been arranged by Mr. Aprea, who is well known among the cognoscenti for his ability to use a magnificent musical palette to bring forth the tone and colour of almost any music he touches. And so it goes throughout the album, which features music that is larger than life with musicians who constantly push the envelope and challenge the status quo, which results in an album that however obliquely sure does honor the great drummer and band-leader Ibn Buhaina, who spent a lifetime doing just that.

Composer, arranger, producer, saxophonist, clarinetist, and flutist, has performed with Woody Herman, Les Elgart, Tito Puente, Frank Foster, Buddy Morrow, Billy May, Charlie Persip, Nat Adderley, Lionel Hampton, and Louis Armstrong. While with Hamp’s band, some of the highlights were a Ramsey Lewis television special, and a recorded concert at the Smithsonian Institute, where Ron’s solos were taped and put into their Archives. Ron was the featured soloist and arranger for performances with Nat Adderley at the world-famous Apollo Theatre, and he also performed at the Paramount Theatre with King Curtis’ Big Band. Ron has played shows for literally hundreds of stars, including Clint Holmes, Rita Moreno, Robert Merrill, Chita Rivera, Rich Little, and Billy Eckstine. Read more…