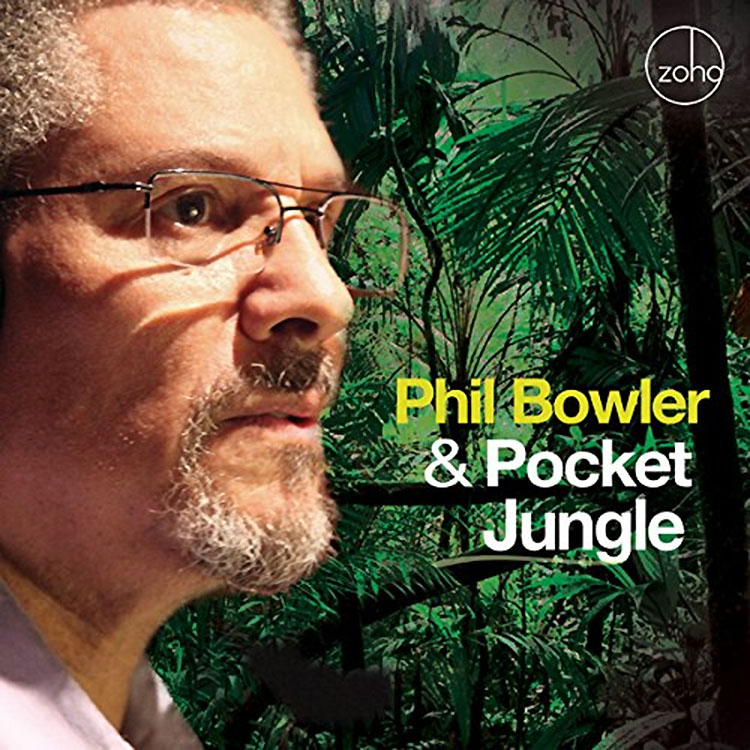 While no one was watching the bass chair Phil Bowler slipped back in and fired up his old ensemble back to life. After some preparation the result has become Phil Bowler & Pocket Jungle, a fascinating journey of driving rhythm and emphatic lyricism. This cohort, back after two decades includes real heavyweights: guitarist Pete Smith, tenor saxophonist Paul Carlon, drummers William Bausch and Scott Latsky—the latter also plays tabla on three charts. This album gives much cause for celebration. Mr. Bowler’s bass is deeply rooted in his unique singing style, which encompasses a wide and expressively varied array of non-verbal melodic sounds. Beneath the seemingly “minimalist” simplicity of his forms lies a wealth of detail, nuance and gesture. The opening selection, “The Set-Up” features quick, rapid flurries on the one hand, and ostinatos that play against syncopated notes. Mr. Bowler employs this again on “Old Devil Moon,” a song that traverses many canvases including a colourful calypso. Here the bass is enhanced with shifts in register and texture. The more propulsive and invigorating “Time Released” incorporates a tabla that provides an angular attack while the drums and cymbals maintain a trotting tempo while the processional-like chords evoke a plain-spoken yet tangy sound world, made more delicious with the acro playing of Mr. Bowler over the incessant guitar vamp of Pete Smith.

Time is well-spoken for in another composition that mentions it in its title: “Time In” by Paul Carlon. This chart features a strong performance throughout by Paul Carlon and incorporates dynamic, tempo and expressive changes that Mr. Bowler makes in the score. His reading of “Little Bear,” a clever little tune that is based on the changes of Sonny Rollins’ “St. Thomas” comes off as encouraging and brimming with lyricism and the joie de vivre that fuels anything that even remotely resembles a calypso. Here, the performance of its composer “Beaver” Bausch features uncommon expressivity and restraint. Mr. Bowler records another impressive solo on “West 22nd Street Theme,” which is once again followed by a wonderfully melodic one by Pete Smith—this time on electric guitar. The most wonderful aspect of the recording is that the songs have been performed like miniature concertos where soloists are pitted against the ensemble in a series of “friendly-s” and vice versa. This is made eminently clear in the Steve Coleman rhythmically tantalising song “Wights Waits for Weights.” This performance accepts the Mbase composition more on its own terms and preserves Mr. Coleman’s train of thought while making it new with the rollicking rhythm of drums and tabla. There is something unusually noble in the performance that grows organically from out of the rhythm. It is almost as if the royalty of African American music is presented at the durbar of an Indian maharajah. The deep rumbling of the bass end—the “dagga” or “baya” (left-hand) drums of the tabla.

Listening to this programme is like being drawn into the nether world—the real pocket jungle—so to speak where it matters not if the listener is lost. No matter where the music leads there is always a chance of re-discovering the self. It is the existentialist quality of the music that makes for this discovery. And everything played on the recording is the reason why because the music is delivered with refinement, precision, energy and a real sense of soul-searching to discover the inner truth of melody, harmony and rhythm through beautifully focussed music.

Phil Bowler was born on 2 March 1948. His parents are Clare and Charles Bowler. He has two younger brothers. He received a Baccalaureate degree in double bass from the Hartt School of Music in Hartford Connecticut. He started studying the violin at age 13 then some weeks later went to study the cello. A couple of months later, when he was tall enough, he started studying the double bass at the age of 14. In High School in order to participate in the marching band he also studied the trombone in addition to the double bass. He dropped the trombone studies to concentrate on his chosen major in college, the double bass… Read more…