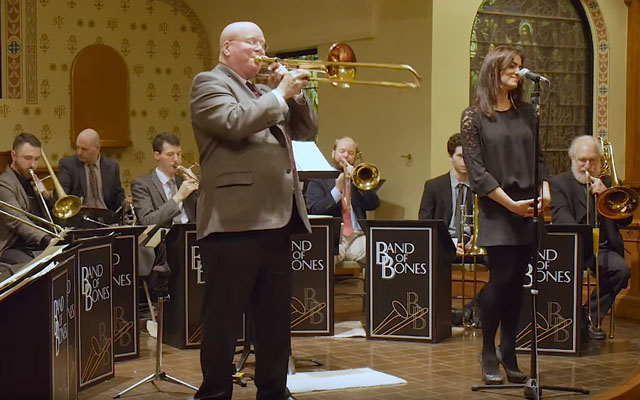 Dave Chamberlain’s Band of Bones’ recital is a gloriously deceptive one. For here is no familiar programme of New Orleans music but an enterprising and enthralling challenge for both trombonist and listener. Opening with the King Porter Stomp from the pen of Jelly Roll Morton – a very modern tribute to early jazz – Mr. Chamberlain then abruptly changes course with Hendrik Meurkens’ Sambatropolis and a world that is shuffling and dusty, like the streets of Rio yet addressing the emotions and communicating joy and warmth. Then later follow Billy Strayhorn’s A Flower is a Lovesome Thing, already a far cry from the elemental King Porter Stomp and finally Lynn Welshman’s Pavane & Stomp and the traditional Amazing Grace. 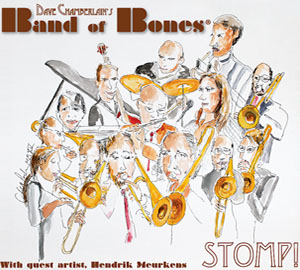 All this could set even the most intrepid virtuoso explorer like Dave Chamberlain by the ears, yet the trombonist’s musical intention is always paramount. He storms the Jelly Roll Morton standard with full-blooded romanticism and finds all the sultry and romantic atmosphere of the Billy Strayhorn original A Flower is a Lovesome Thing. If all of this and more betray the influence of the trombone elders such as JJ Johnson and other ancestors they are also highly individual and distinguished, their often playful quality ironically surfacing through a formidable intricacy. Memories of (Mr. Chamberlain’s) earlier work flicker through the Meurkens piece as well as other composers while Band of Bones Blues recalls Al Grey in all of his greatness. More to the point, Dave Chamberlain plays with unfaltering bravura and conviction and his challenging lead has also been superbly followed by the excellent ensemble.

That theory only bears out, though, if the music here is played as straightforward, accomplished and without overpowering ego. It’s a relief, then, that the music from Jelly Roll Morton composition onwards is just that – an admirable performance technically (with just enough of a stamp of his (Dave Chamberlain’s) own personality to make it distinctive), the tempo relationships make sense, and his musical argument is intelligent but uncomplicated. It is, then, the proper arbiter of the good and different things that follow, in the form of new works that in some way reflect all that is great about Jell Roll’s visionary sensibilities, from the evolution from simplicity to virtuosity of Billy Strayhorn’s compelling ballad to less conceptual references to the stomp such as the ghostly phrasing of Pavane & Stomp.

I could go on picking out highlights from every piece – the call-and-response in Blues, the subtle rubato in Chega de Saudade, the infamous studies in thirds and sixths of King Porter Stomp, the soaring spirituality of Amazing Grace – the moments and passages which make me listen afresh to these familiar works and in some cases, hear things of which I had been previously been unaware. The greatest on the disc? I don’t know; but the Todd Anderson’s arrangement of Billy Strayhorn’s lovelorn Flower is one of the most consistently inspired, masterfully executed and beautiful-sounding versions of that great song that I can recall. All ‘bone fans must have this disc for all of these reasons and more.

Track List: King Porter Stomp; Sambatropolis; The Sweetest Sounds; A Flower is a Lovesome Thing; Flat Black; Band of Bones Blues; Chega de Saudade; Delilah; Is You Is, or Is You Ain’t, My Baby; Pavane & Stomp; Amazing Grace.

Raised in Buffalo, Dave Chamberlain began playing trombone at the age of ten, inspired by watching his four cousins playing in a brass quartet on the Ed Sullivan Show. He began doubling on flute in high school, going on to earn a B.S. degree in flute, and later an M.S. in trombone. His primary teachers have been Anthony Gorruso, John Wummer, Carmine Caruso, John Swallow, and John Rojak. Read more…