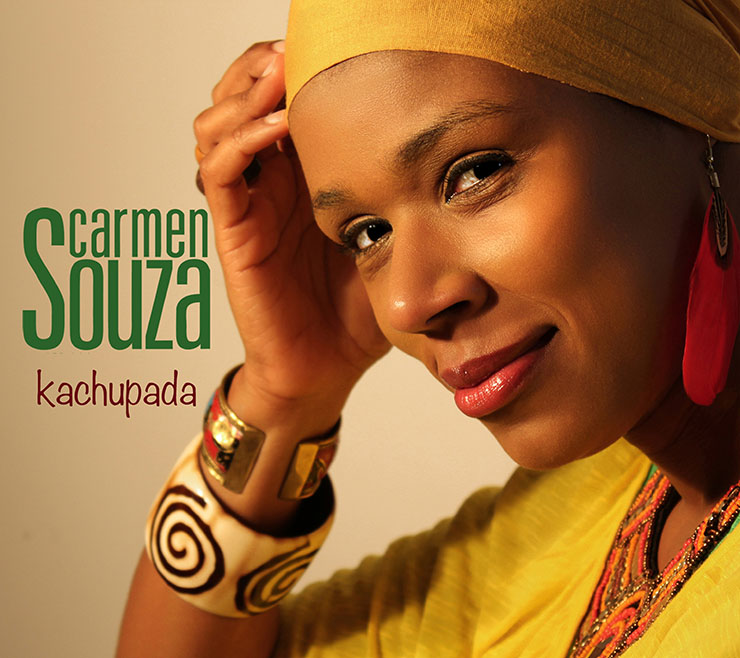 Carmen Souza is the extraordinarily talented vocalist who was born in Lisbon, Portugal, within a Christian family of Cape Verdeans. She has melded her unique mix of Afro-Caribbean and native Creole music with the fluttering feeling of saudade and the dialect of jazz into an idiom of her own. On Kachupada she sings with a mystical lightness of being that is grounded metaphorically in her native creole and the brilliant elasticity with which Souza re-invents both standards such as “My Favourite Things” and bebop classics, such as Charlie Parker’s “Donna Lee” while showcasing her own music. Although Souza is purported to having been influenced by the likes of Bill Evans and Keith Jarrett, musically she is closest to Thelonious Monk, whose great chopped and fragmented musical architecture she most resembles albeit “vocalastically”. This is to say that she manipulates her voice into becoming an instrument so unique that only she can play it; much like Monk’s reinvention of technique, dynamic and expression with which to play the piano.

Souza manoeuvres her voice in such a manner that it resembles the fluttering wings of a hummingbird as it hovers above a flower; only in her case she takes flight only to hover above bass, saxophone, flute, piano, drums and percussion seeming to dip and savour what each instrument has to offer while she lets her voice glory in each or all of them. The vocalist inhabits a rarefied plane from which she makes seemingly impossible leaps into what have been unknown realms until she discovers them. And then she makes them her own, creating circles and parabolas, and other impossible shapes that she carves of thin air with her singular vocalastics. The sheer wild re-creation of her kind of blues on “T Chega” is gloriously beholden to heart and mind. Clearly the vocalist employs parts of her being that no other singer does. Feelings and emotions, for instance, arise almost spectrally from her soul, with which she is so in tune as to create songs like few could even imagine, let alone sing. “KolaDJazz” is one of those songs as is “Nova Dia”. Most of the music she sings is similarly linked to her being and the finest examples of these are “Donna Lee,” “Luta” and the magnificent version of “My Favourite Things”.

Much of Souza’s unique music flies in the face of convention, drowning all rational thought are due in part to the inventive arrangements and unique buffering of the ingenious Portuguese Theo Pas’çal. The bassist is a kind of alter-ego of the vocalist, at least instrumentally, and appears to hold up an ever-changing musical mirror for the vocalist to “look into” as she launches into her spatial creations. Pas’çal is also Souza’s long-time musical partner, which makes playing with him a lot easier; although it is hard to imagine that Souza is predictable in the route that her voice may take on any given song. Still it appears that no musician enjoys such artistic closeness with Souza’s spirit as Pas’çal does. On Kachupada, however, there appears to be another doppelganger: the incredible percussion colourist, Mauricio Zottarelli. The Brazilian is a true changeling; a magical creature who seems to be everything that a mythical shape-shifter is. Zottarelli not only finds the perfect cycle of beats with which to enliven the vocals gymnastics of Souza, but like Pas’çal, also finds the perfect colour and shade with which to daub the lyrics as they float by.

It would be hard to understand why such a record was ignored by the Latin Grammy organization? Likewise it would be a fallacy if it were ignored by the voting members of the Grammy’s for which an agonizing wait is in order. Awards or not, Kachupada is certainly one of the rarest kinds of musical gems to have come to light in the year 2012.