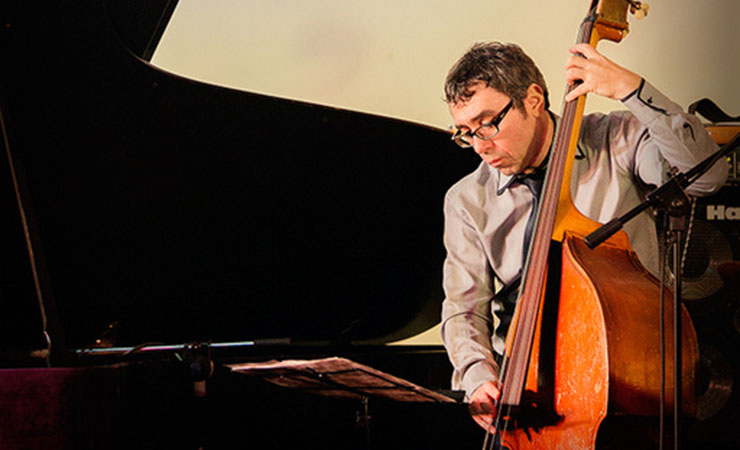 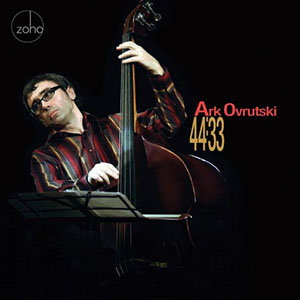 Two years after he released Sounds of Brasil (Self Published, 2010) bassist Ark Ovrutski has graced music with a fine new album, 44:33. Numbers can be deceptive and the shortness of this recording might suggest that Mr. Ovrutski had nothing more to say, after a point, but exactly the opposite is the case here. The titles of his music tend to be less intriguing that someone with excess showmanship, but again, Ark Ovrutski would have little to do with flashy pronouncements. The bassist takes the path less known and eschews the spectacular in favour of studiousness and musicality. And his record has numerous musical examples of his reliance on his wonderful musical intellect and an emotiveness that brings forth the truths of heartfelt ideas—heartfelt because they come not so much from Mr. Ovrutski’s obviously advanced musical intellect, but from somewhere deep inside his body. That part being the soul and the suggestion is that it is the bassist’s spectral self that dictates this body of work.

There can be no doubt that Ark Ovrutski’s music comes from somewhere deep within his body. Listening to his soli it is easy to assume that his music emanates from the soul. He further seems to feel this music in the pit of his stomach and this gives the music a combination of elevated polyphony melded with a deep and visceral energy. His playing seems to hark back to the heritage that speaks of Jimmy Blanton and Oscar Pettiford, Ray Brown and Charles Mingus. This would be enough for someone other than Mr. Ovrutski. However, with this bassist it means stretching more and digging deeper to reach further as there is some vaunted housekeeping every time he sets up to play. Mr. Ovrutski’s tone is sonorous; his playing sinewy and his voices echoes with a growling gravitas in his soli which are inventive, edifying and constructed just as if they were intricately wrought architectural masterpieces. The one he plays on “Waltz” is a beautiful case in point.

Mr. Ovrutski has summoned some of the finest young musicians to be his partners on this date. The trombonist, Michael Dease is one of those players who continue to appear on dates with the finest musicians. It is on the frontline of quintets and sextets led by master musicians like The Heath Brothers, Winard Harper, Renee Rosnes, Bill Charlap, Claudio Roditi, and Lewis Nash, where Dease has revitalized the trombone’s image. Saxophonist Michael Thomas is another fine player, who does not simply adorn the date, but plays an uplifting part in the music, as do the pianists David Berkman and Benito Gonzalez. And, of course, Ulysses Owens who is already deemed to be a young master, plays with utter simplicity and sensitivity, keeping a close watch on where his bassist wants him to go. For his part Ark Ovrutski is a generous leader, allowing his soloists to stretch and go where they must; where the music takes them by the heart: that much is clear on “Baby’s Vibe”.

This is a short album, but the repertoire is poignant right from the early bars of the second-line march “New Orleans” through the elegantly composed and played “Waltz” and “Milestones” down to the conclusion on “Path Train.” The repertoire seems to be carefully selected not only to showcase the musical skills of its protagonist, but to also show the beautiful drama that plays out song after song on this memorable album.

Born in Kiev, Ark was playing violin at age 8 — but not out of love of classical music. Influenced by his father who admired Duke Ellington and Ella Fitzgerald, he remembers being “always excited by swing.” Today Ark regards Charles Mingus as his hero, citing Mingus’ goal of advancing the art of a composer-bassist towards a melding of classical and jazz traditions. “I’m working on the challenge of being a bassist – not just a prominent soloist,” Ark explains. “I think the future requires bassists to have both classical-level technique and a jazz player’s ability to lead and improvise.”

Ark has pursued both paths of experience. He attended and graduated with a degree from the Russian Academy of Music, where he roomed with trumpeter Alex Sipiagan (frequently featured today in the Mingus Big Band) and met tenor sax star Igor Butman. Ark visited the U.S. in the early ’90s, then got a job as house band mainstay and artistic director for a jazz club in Krakow, Poland, where he remained for three years. He “travelled like crazy” all through Europe, enjoying extended time in Spain and Italy, before returning to Moscow to freelance and produce his first recording (not available in the West).

In 2003 Ark attended Berklee College of Music’s summer clinics in Italy. Told that to advance his career, he should be in America, he applied for and received a scholarship to New York City’s Drummers Collective, in which he enrolled in 2005. He was soon gigging in Harlem clubs such as the Lenox Lounge, Minton’s and St. Nicholas Pub with the circle of musicians including vocalist Gregory Porter. He was also mentored by drummer Duduka Da Fonseca, with whom he has recorded and toured, and who is prominent on Ark’s 2011 self-released album Sounds of Brazil.

In 2006 Ark began work on his masters degree in music at Rutgers University in New Jersey, studying with bassist Mike Richmond, drummer Victor Lewis and pianist Stanley Cowell, among others. Veteran bassist Bob Cranshaw advised him to go for a doctorate, which he’s done at University of Illinois at Urbana-Champaign. Taking the most ambitious compositions of Charles Mingus as his thesis project, Ark has just completed his degree requirements and at this writing is about to receive his Ph.D.