The mighty task of transposing the great Federico García Lorca from the landscape of poetry to the soundscape of music—despite the inherent musicality of his work—is a daunting one. Yet the New York bassist Alexis Cuadrado has picked one of his most widely-known volume of poetry, Poeta en Nueva York. 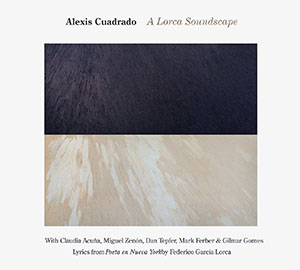 Rendering poems from a work in which Mr. García Lorca’s magical poetry—expressed with deeply embedded duende in A Lorca Soundscape is almost like attempting to perform Franz Liszt’s concert etudes—particularly the tortured sighs of “Un Sospiro”. And yes, Alexis Cuadrado comes off with flying colours casting the lead voice of the poet in the bass, with Claudia Acuña’s voice sharing in the spoils. So, no, this may not be quite the equivalent effect of Leslie Howard performing Franz Liszt, but the very idea of assigning the voice of Federico García Lorca Poeta en Nueva York to the double bass, with Ms. Acuña being a kind of doppelgänger, with her husky contralto is almost just as good as it deepens and even extends the colour palette of A Lorca Soundscape manifold. It is like having Poeta en Nueva York and La Casa de Bernarda Alba all rolled into one.

Mr. Cuadrado is one of those bassists who eschew the spectacle preferring instead the deep vibrations that come with having a resonating instrument such as the bass violin or contrabass pressed hard against the body so its beat echoes in the depths of each heartbeat of the human body itself. His soli are thus more moving and inhabit the deepest recesses within the woody interior of this magnificent instrument. Notes are imbued with the gravitas and erudition born of virtuosity quite beyond Mr. Cuadrado’s years. The rumble of the bass is magical and animated—the exquisite opening bars of “Asesinato (Dos voces de madrugada en Riverside Drive)” is a fine example—and at times like these the instrument sounds as vocal as it snaps and pops in counterpoint to the exquisite wailing voice of Ms. Acuña. So alive and animated is the bass that it is orchestral and although played pizzicato almost throughout the entire programme, but in playing repetitive figures and dallying over notes until their eventual despairing echo into oblivion is a fine device that covers the missing con arco passages. There are other magnificent aspects of this music and these come in the form of Ms. Acuña vocalising the profoundly beautiful poetry of the originals—some of which have been edited and/or interpreted to allow the music to live lyrically.

Miguel Zenón’s playing is masterful and as beautiful as anything he has put on record. The technical wizardry is reminiscent of his Puerto Rican trilogy that ended with his great record Alma Adentro—The Puerto Rican Songbook and of the epic nature of his storytelling on Rayuela. The enormous good fortune of his presence on this record is best felt on “Danza de la muerte”. Here too is the brilliance of pianist Dan Tepfer heard. The pianist varies the breathless nature of his playing by giving his soli room to breathe in a manner that is rare. Many pianists would not resist displays of dizzying virtuosity, but Mr. Tepfer is much too clever and inventive to allow his technical abilities to get the better of his playing. All of these lead voices—including the principal one of Alexis Cuadrado—display their singular individuality on “Danza de la muerte” and on a very special and elementally melancholic version of the poem, “La aurora,” the lyric of which is sung verbatim from the poem. And it is at times like these that the true memorable nature of the project is felt. It is also at times like these that the depth and majesty of Federico García Lorca’s poetry and the utter beauty of Alexis Cuadrado’s musical interpretations of the poems come together in one mystical puff of smoke.

Alexis Cuadrado on the web: alexiscuadrado.com