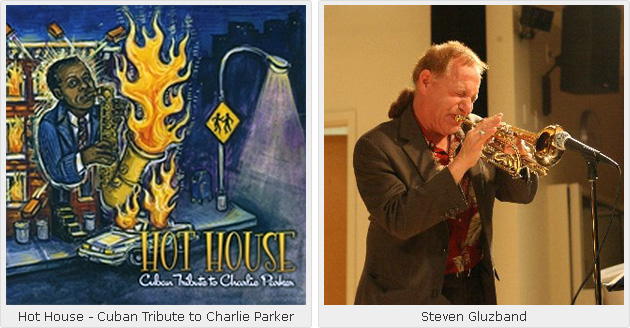 There are really only two truly innovative and unforgettable records made to honor Charlie Parker. One is the remarkably inventive Tribute to Monk and Bird (Tomato Records, 1978) with music by the legendary artists arranged and directed by the German composer Heiner Stadler, which featured Thad Jones, Stanley Cowell, George Lewis, George Adams, Warren Smith, Lenny White and Reggie Workman. This record was so far ahead of its time that most audiences have still not caught up to its magic. Its raison d’etre was an attempt to re-interpret Monk and Bird in a thoroughly modern, possibly European context.

The other record in praise of one of the music’s greatest innovators is this one: Hot House – Cuban Tribute to Charlie Parker. And this too for reasons completely different to what Stadlers’ record has come to be known for. The invention here is no less astounding. The record is important unique for the fact that the tribute is, first of all, it is an unabashed homage to the music itself. And this homage acknowledges the many points in the history of the music, from the origins in New Orleans through swing to the bebop era that became perhaps the most arresting and enduring invention in Afro-American musical polyrhythms. Next is the fact that Steven Gluzband, the cornetist and trumpeter who directed this project has brilliantly de-constructed bebop and re-cast its exquisitely maddening rhythms in Afro Cuban form.

So Parker’s “Red Cross” becomes a mambo-flamenco rhythmic soup that is so heady the music swirls around the body and all but levitates it onto a dance floor to dance crazily. “Quasimodo” is even more ingenious. While the melody is played fairly true, the tres guitar adds the element of the son to the music and there is a wildly incredible contrapuntal melody running throughout the song. Benny Bailey’s “Five Sisters” gets a fairly straight bebop treatment until by the middle of the second chorus it is reconstructed in Latino harmonics and rhythmical patterns. Itai Kriss’ flute solo is, like Parker’s solos always were: short and memorable. So is Tad Dameron’s “Hot House” been reconstructed, by fusing bebop with mambo. Parker’s “Little Suede Shoes” was always written with an underlying Caribbean rhythm, even when Bird himself played it. But here it becomes so outrageously danceable that it is impossible to sit still. Dizzy’s “Night in Tunisia” is perhaps the most unforgettable reconstruction, with a riveting Changüi rhythm.

But it is not just the altered rhythmic idioms that give this record its special and unique character. It is, after all, a Cuban tribute. What is so special is the unbridled invention that runs throughout… the counterpoint that is employed, giving the music an almost European shade of the baroque. It is such an apt device to put counterpoint with bebop as both are perhaps the most enduring harmonic and rhythmic innovations in music over several centuries.

The addition of the tres to the music of Bird is another stroke of genius. Of course bebop has been recast as danzon/son/Changüi… still what a brave move… and how much more memorable the record and the music has become. Of course the musicians are excellent throughout, especially the core band of Gluzband, whose horn is blazing hot throughout. “Chinchillita” is an exquisite percussionist. Remarkably also, Steven Gluzband was spot on when he chose to also make this as homage to Afro-American music be that as it may include New Orleans, Swing and Bebop. His respect for the heritage shows in a creation that shines on its own. Hot House may well be not just an unusual record, but also one of the finest musical documents released this year.