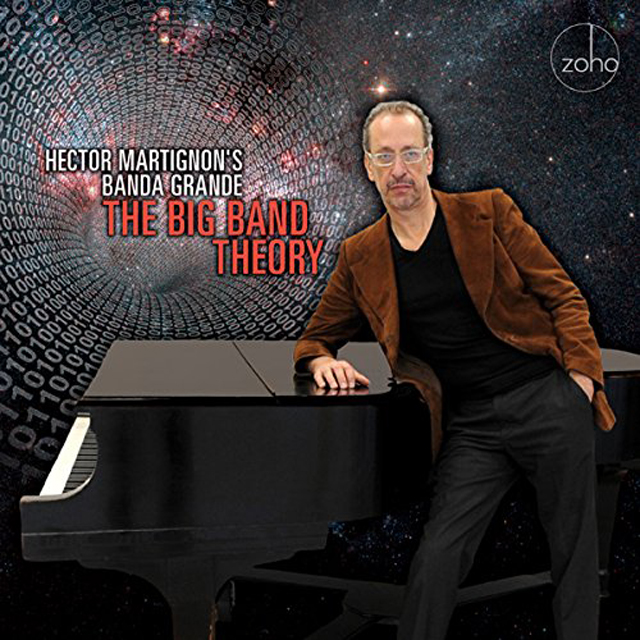 Big Bands are an endangered species. So it is with great excitement that one welcomes Hector Martignon’s Banda Grande. The release of Big Band Theory is like the sighting of an elusive snow leopard. There’s a lot to love in this remarkable disc, performed by one of the smartest big bands conducted by Hector Martignon, who’s already brought such clear-eyed vision to Latin American music, all the while melding its traditional forms with European classical and Afro-American Jazz music. Small wonder then, why Martignon is one of the most admired musicians not only in New York, but in the rest of North America, as well as in parts of Europe, Asia and all through Central and South America.

Hector Martignon and Banda Grande play this music – much of it by Martignon – with genuine freshness. Phrases are expressively moulded, inner parts nurtured and long lines – bobbing in and out of folk forms – are beautifully sustained with lively attention to detail. This pays rich dividends: the way, for instance, that the woodwinds and solo string lines gently come forward, then step back in the unsurpassed gentility of ‘Hell’s Kitchen Sarabande’ with which opens an ornate door into the rest of the repertoire. And listen to the ascent of the trombones on ‘Trombone Chorale’ to hear just how much ardour these players can generate. The recording, made at several studios, on several occasions is warm with a slight bloom that suits the music well.

Hector Martignon’s soloists measure up well against the competition too. One in particular – Joe Burgstaller, who literally soars on ‘Erbarme Dich’ from Bach’s eternal St. Matthew’s Passion and yet retains an inward quality that responds sensitively to the solemn content of this great aria, voiced by the sensational contralto, Brenda Feliciano. Banda Grande responds to these and other compositions with exquisite style and grace and in the tonal colours and textures, and marvellous use of instrumental timbres this music feels like symphonic music, not only expertly composed, but superbly arranged and idiomatically interpreted. Music delivered with such memorability is sure to enhance the already burgeoning reputation of Hector Martignon and his musicianship.

The music played by this big band is boldly modernistic and hot-blooded, and leaves every other recent orchestral performance in the shade. Moreover the elaborate compositions are elegantly played. And what poetic fantasy Hector Martignon communicates. Saxophones, trombones and trumpets are used soulfully and with a crooning quality that is rare these days, when most musicians seem to have forgotten that these instruments, when properly played will imitate the human voice. Best of all the up-close-and-personal recording walks you deep inside the harmonic mists swirling around this quite beautiful music.