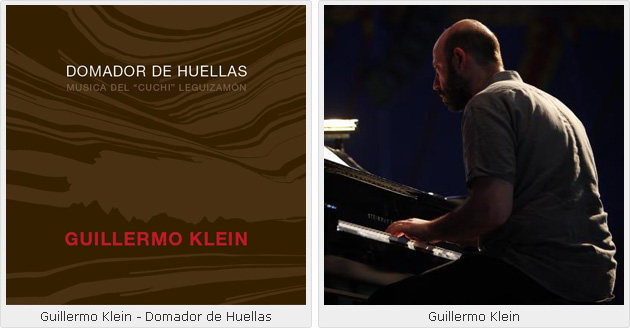 Guillermo Klein’s third album for Sunnyside Records is also one of his most beguiling and very possibly one of the most memorable tribute albums of the year. Klein’s album, Domador de Huellas – Music of “Cuchi” Leguizamon, literally “the tamer of the footprints” has a deeply significant meaning. The “footprints” in question are a visceral element of a history that is close to disappearing. In this instance the footprint is also one that Gustavo “Cuchi” Leguizamon left on the proverbial sands of Argentinean time in his incarnation of one of that country’s leading composers of folk songs. In fact it is a credible assumption to suggest that Cuchi Leguizamon’s music defined one of the most pivotal periods in Argentina’s progress, from feudal-to-democratic-totalitarian-to democrat periods, one that left a mark on the city and the pampas.

Leguizamon’s record of that history left behind in the proverbial footprint beckoned Klein for several years until he could no longer resist it. In choosing to re-imagine the music Gustavo “Cuchi” Leguizamon, Klein also chose to inhabit that footprint, but here on this album, that of the elder musician dissolves and melts into Klein’s remarkably creative one. Leguizamon’s music, for instance, contained such high emotion that the songs’ suggested narratives had the consummate power of operatic arias. In Klein’s hands—and with his astute manipulation—they become emotional bombs, as in the chart “La Pome&#241a” that is rendered with devastating swagger and chilling mesmerism by the modern diva, Liliana Herraro.

Gustavo “Cuchi” Leguizamon was known for constantly pushing the melody and harmonic boundaries of formal music. His “zambas” and “tangos” posited the dusty, but rhythmic swagger of the pampas. “Zamba Para la Viuda,” “Zamba de Lozano” and “Zamba del Carnaval” are possessed with the kind of shuffle that makes them living breathing pantomimes that come alive as the characters and their emotions devour the listener’s inner mind. Songs such as “Carnavalito del Duende” swell with the dark magic that arises from deep within the soul and over power the senses.

However make no mistake there is much more of Klein in these works than he would be happy to let go. Guillermo Klein appears to have gone into a trance and let the songs speak to him at an elemental level, tabula rasa so to speak. For it is more than the songs of Leguizamon that have come to life here. There are characters, some of whom only became real after being sung with elemental sadness or hearty historicity. And this is where Klein scores perfect hits where no one else seems to have in a resurrection project of this kind. Not only are there his own elastic pieces in homage to Leguizamon—“Domador De Huellas,” to be precise, but there is his uncanny sense of getting to the tonal center of Leguizamon’s palette of sound. This is the hypnotic element of the music that strikes at the heart. Then there is that molten heat from Klein’s backtracking footsteps as he plants them deep in the groove of Gustavo “Cuchi” Leguizamon’s own footprints, so to speak.

Guillermo Klein on the web: www.myspace.com/guillermoklein