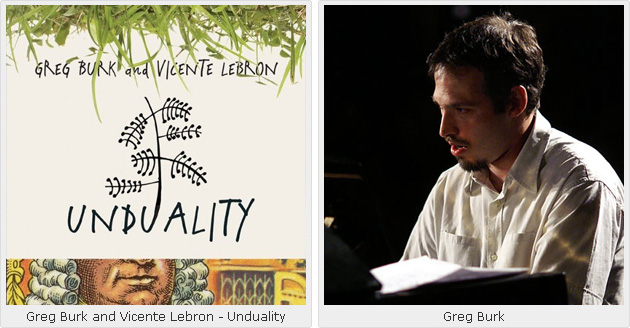 This album, Unduality, a duet between pianist Greg Burk and the Dominican-born conguero, Vicente Lebron, is quite simply the most innovative interpretation of Johann Sebastian Bach’s “First Inventions” since the master conceived of it and a pianist’s sublime exercise. In fact it could be one of the most striking re-imaginations of a previously composed piece, ever. In themselves, the “First Inventions” are superlative creations demonstrating contrapuntal technique, while at the same time exploring a wide range of expressions using various styles in all 12 keys and developing the motives in a brilliantly logical fashion. Bach’s melodic variations consisted of augmented, diminished, inverted and retrograde exercises as well.

Burk goes a step further in his re-imaginations—further, that is, than imagining their creation in an African setting, with primordial percussive breaks by Lebron. What he has done is to “teach” the motives to each of his hands to play the contrapuntal parts in the different keys, and then recreated the augmented, diminished, inverted and retrograde figures almost independently of each other by varying the pulse of each motive, delaying the left hand whilst accelerating the right for instance, and vice versa. Adding loops and overdubs then added to the harmonic possibilities. But at the core is Burk’s unbridled virtuosity, with its sublime control over dynamics and expression that sets him in a class by himself.

Those who are familiar with the progressions of Bach’s original “First Inventions” will also marvel at Burk’s sometimes irreverent interpretations and re-imaginations, especially when Burk delves into the realm of contrapuntal dissonance. And then there is the spectacular interaction of Lebron’s superb percussion, which also conjures elemental visions of, for instance, a calm earth, or one in the midst of turbulence—his wind percussion in “Beach Party” being absolutely superb. Burk also outdoes himself in the re-interpretation of Bach’s exercise throughout, and his “Unduality Ten: Bach to the Future” (for each of the key changes are referred to as “Undualities”) is perhaps one of the high points of the album. Another must surely be Burk’s own imagination and extension of the original exercise in “Unduality Thirteen: Vox Bach.” And the Monk-like, chopped elegance of “Unduality Twelve: Bach Out” is a stunning inversion in itself. But to end the expedition with chorale counterpoint that chips and cracks open the scale is truly inspired.

Clearly on the strength of this album Greg Burk must be considered one of the most inspired innovators in music. His album, Unduality must be one of the most surprising sets of improvisations this year, on the level as anything that that other genius, Bobby McFerrin might re-invent vocally, perhaps.

Greg Burk on the web: www.gregburk.com