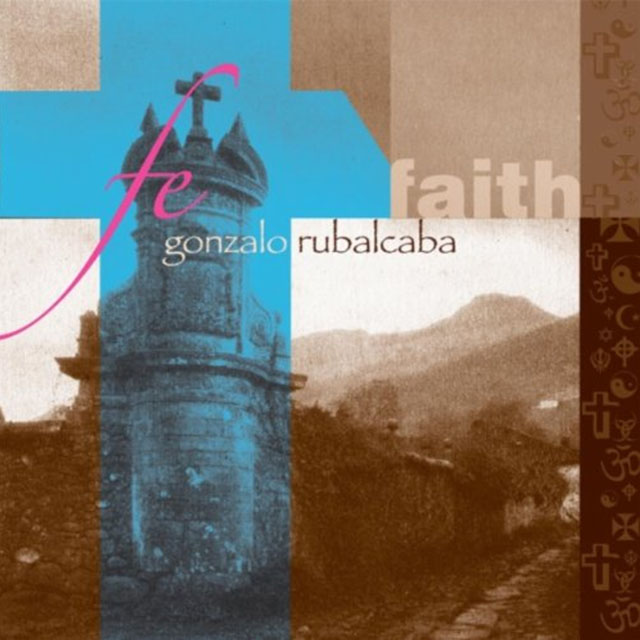 The thin line between theology and art was blurred in ancient times and this was manifested in the Psalms and in the Song of Solomon—both forms of poetry set to music and completely absorbed by devotion, praise and worship. What characterized this form of poetry and music was the complete surrender of the intellect to the soul. Thus the utter beauty of this art was able to shine with sheer passion and soaring spirituality. This is what characterizes this album Fé-Faith by the pianist Gonzalo Rubalcaba. An artist of rare and unbridled virtuosity, Rubalcaba has let his soul dictate terms to his fingers, resulting music that is moved by the clave of the soul rather than the metronomic rhythmic pursuit born of learned repertoire.

Rubalcaba has never sounded so sedate and so pensive. It is not so much that he has eschewed dazzling ruins and filigreed arpeggios—which he has not—but that he dallies in his phrasing, giving the impression that he is pausing from breath; allowing the art to come what has been written tabula rasa—upon the tablet of his heart. This is a bold move by the pianist and what may seem contrived to some is completely natural to Rubalcaba. Definitive statements such as those declarative chords that open the doors of improvisation in “Derivado 1” so that the music can flow gently outwards, with ponderous grandeur. This lithe yet sinewy music seems accented by the lapping rhythm of waves devoting their all-encompassing power upon the shore. Thus the energy released by Rubalcaba’s might musicality is constant, undulating when he wishes to make a particular heard in all its decorative, or if he simply wants the sheer sonic power of the depth of the piano to fill the air.

Rubalcaba’s impressions of John Coltrane’s and his masterly re-interpretation of Dizzy Gillespie’s music are characteristic of this spectacular facet. The “Improvisation” pieces, cased on Coltrane have a controlled energy to them. The two re-visits to Gillespie’s “Con Alma” flow more freely after their rhetorical opening statement. However, both series of songs exude the same profound mysticism that is heard throughout the album. In fact, on the first “Con Alma” it is almost as time has stopped for the pianist and all he is doing is praying with music. Put together the music of Fé-Faith appears to be Gonzalo Rubalcaba’s hymn of the universe. In the lilt and sway of his bubbling, flowing and sometimes gushing phrases that make up the intricately loping lines of his music Rubalcaba also lets a quiet fire burn and simmer with a flame so blue and barely discernable that the music warrants listening not so much with the ear, but with the heart.

Artists have often spoken of being channels for a voice that speaks through their craft. In the almost ceaseless fluttering of his long fingers, caressing the keyboard, it would appear that Rubalcaba is no different. His music speaks, but from the soul of something otherworldly so much so that it could well heart and soul of God himself.

May 27, 1963… Gonzalo Julio Gonzalez Fonseca was born in post-revolutionary Havana into a musical family rich in the traditions of the country’s artistic past. During his childhood, in addition to the standard fare of elementary schools, Gonzalo absorbed the Cuban musical heritage of his nascent environment through personal contacts within his family, notably his father, pianist Guillermo Rubalcaba and his two brothers (pianist and bassist) as well as from leading musicians who were frequent houseguests: Frank Emilio, Peruchin, Felipe Dulzaides and others. Read more…