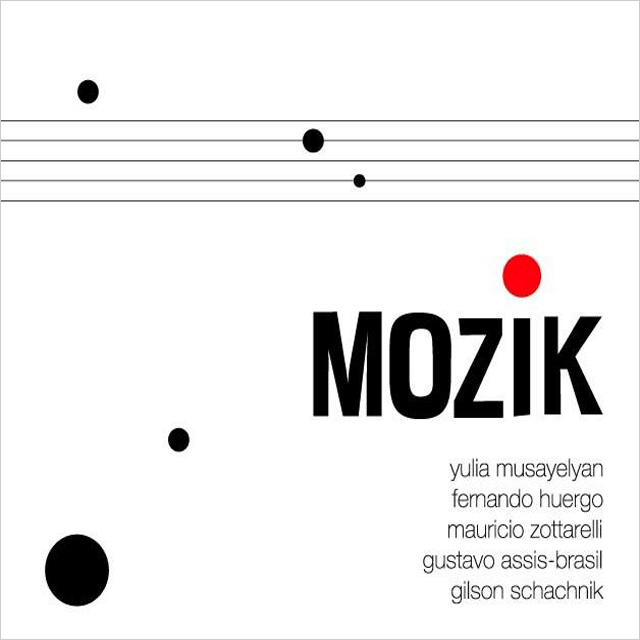 It is amazing how it sometimes takes a foreign adventure to find one’s appreciation for the culture of home territory. Whereas the love of fusion, jazz and rock music originating in the United States is embraced with verve in the Southern Hemisphere, likewise I have never run into a native jazz musician in the Northern Hemisphere who isn’t fascinated by the rhythms of African influenced Brazilian music, particularly the region of Bahia. Keyboardist Gilson Schachnik and drummer Mauricio Zottarelli, both born in Brazil, admittedly were never steeped in the traditional cultural rhythms and instruments unique to their birthright. They did not know each other before meeting at Boston’s Berklee College of Music, where both have achieved associate professor positions. Growing up deeply influenced by a strong background in hard rock and fusion jazz, they each found themselves expected to be natural experts in samba and bossa nova by their peers and professors at Berklee. The resulting examination Schachnik and Zottarelli took of Brazilian music, seen through the lenses of their mutual backgrounds in such an entirely different musical art form resulted in winning a faculty grant from Berklee to produce MOZIK, a project for a quintet of very diverse international musicians who all are now based in the United States.

Web’s Samba, a composition by Schachnik reveals unrestrained influences from the music of his youth and the study of Brazilian influenced jazz. Although I don’t like to compare groups, I was happy to find the same sense of artful fusion I enjoyed in the heyday of Azymuth… a favorite band of mine from my own youth. Having found a way back to the music of South America, the composition includes rhythms from the musically lush Bahia, including Candombe and other Yoruban influenced sounds. The drums are indeed influenced by hard rock, and I thought them a little heavy for this composition in the beginning of the piece, although I grew fond of the heaviness by the end. The flute, deftly handled by Russian flautist Yulia Musayelyan has a rough, unrestrained edginess to it. The bass is the glue of the piece and confidently laid down by Fernando Huergo of Argentina.

A Felicidade, a Jobim composition is given a new treatment with breaks tightly led by Musayelyan’s cutting, percussive flute work and very nice guitar solos by Brazilian Gustavo Assis-Brasil. It is true, no bossa nova or soft samba recording can leave out a few gorgeous Jobim tunes, but here the arrangements take on new influences and turn this classic standard into a different expression. A Felicidade dances out percussively, freely interpreted and brand-new! Herbie Hancock’s Eye of the Hurricane saunters in with Schachnik’s melancholy, expressive piano work. It is a well blended piece carried by Assis-Brasil’s pretty guitar work and Zottarelli’s brushes and nice cymbal work. The flute has moved into a supportive position in this arrangement, well executed and still maintaining the tone previously admired in the first cut.

O Amor em Paz -another tribute to Jobim- is also an updated treatment invested with each instrumentalist’s verve, with the rock history of Schachnik and Zottarelli most apparent. I enjoyed the crossover between the classic interpretation of this popular Jobim piece and the youthful drive and color of the rock/fusion influences.
A pulsing samba version of the beloved Monk tune Pannonica has solid bass work by Huergo, which in turn supports fluid piano work by Schachnik. Rightfully, the flute lays out on this piece. I would have liked to have the volume, but not the energy of the drum kit pulled back a little during the bass solo. Still, this is a very tasteful treatment of Pannonica.

Zelia brings the flute back in to the forefront. An original by Schachnik, it enters with a flourish and settles into some nice guitar work, supported by the keyboard’s violin sounds. If the players get the opportunity, real violins would add a vibrant richness to this fun composition. Zelia is a fiercely happy piece that also breathes. I hope to hear more compositions by this pianist. I hope he can use actual violins.

The third tribute to Jobim’s music is the classic beauty Desafinado, again worked into an extravagant, fun arrangement. It is a true percussionist’s piece. An ideal meter was put into place, making this version impossible to sit still to. Again, the flute is not overtly sweet, although that is traditionally what is heard when used as a voicing in this tune. Instead, it has a dark quality that suits the interpretation very well.

Canto das Tres Raças, a Duarte/Pinheiro tune brings the project to a tasteful and solid conclusion. A percussionist’s delight, with Musayelyan’s rich flute dancing over the top, it is a relaxed yet energetic samba that incorporates the breadth of the blending of diversity from all players’ backgrounds. It contains a lovely, extended piano solo supported by the drum kit, but evolving into a hand percussion and vocal samba that leads out the end of the piece. It is a fitting finale to this recording project.
Track Listing: 1. Web’s Samba; 2. A Felicidade; 3. O Amor Em Paz; 4. Eye of the Hurricane; 5. Pannonica; 6. Zelia; 7. Desafinado; 8. Canto das Tres Raças.