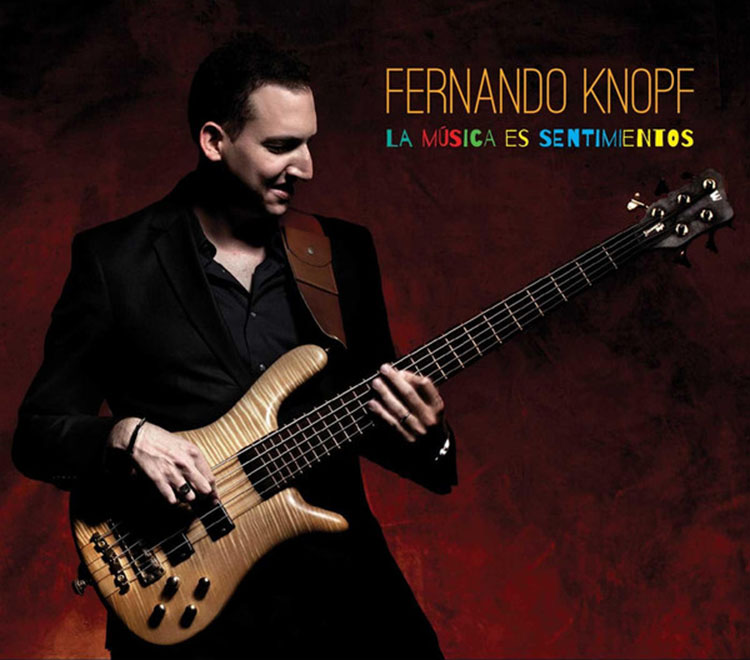 The bassist Fernando Knopf manages his two hats very comfortably. He is always ahead of the game as a bassist and shepherds his musical cohort with creditable skill and inspiration. Best of all he makes music look deceptively simple and this is the hallmark of a good and rather mature musician. This album, La Música es Sentimientos is of a well-directed theme. And although it is wide-ranging in its musical topography—Afro-Cuban, Latin American, Brasilian, American—it is brought together in an attractive mélange, almost as if the bassist had travelled many miles in his head of course, to produce it. Through it all he remains resolute in making music that is exciting in all its melodic, harmonic and rhythmic splendour. Many musicians have sought to do this and remain dedicated to theme and content, but few can claim to have done so with as much focus. This is what makes this musical excursion quite memorable.

As a bassist, Mr. Knopf seems driven to let his articulate voice set the stage for all of the melodic invention he inspires from the other instrumentalists. He displays admirable technique informed by brilliant fingerwork, an affecting personal manner and above all great taste. The bassist’s attention to tempo is complemented by a fine melodic sense. His lines are clean and carefully ornamented and never too ostentatious. There is a magnificent gravitas to Mr. Knopf’s tone. His playing is joyful and always exploratory in voicing, always imaginative in articulation. Through it all he remains inventive, always looking for new ways to make statements. This is evident from the manner in which he juxtaposes what might be deemed to be expected with that which always comes as a surprise. This is an admirable quality in a musician, especially in a bassist who is sometimes tempted to play safe in a purely rhythmical manner.

The music on La Música es Sentimientos draws attention to the world of Jazz-inflected Latin music in a wonderfully new way. There is something breathtakingly poignant about the arrangement of Astor Piazzolla’s “Escualo” as well as “Libertango”. The chacarera, eponymously titled “Chacarera Moderna” is wonderfully shaped and takes the raw materials of the form and makes of it an architecturally exquisite musical piece. Mr. Knopf does something else that is admirable about this record: He delivers a host of original compositions in a calculated and exciting procession of tunes. Not only is the music original in form and content, but they are often mesmerising and contain a gorgeous fluidity that makes them quite memorable. The chacarera is just one such example; but all of the others certainly qualify for this accolade.
In sum, Fernando Knopf is blest with exemplary concentration and a refined understanding of larger-band-like writing. There is also a boundless energy informed by his command of timing and of glorious variety and drama of the compositions and these are what makeLa Música es Sentimientos a rather fine album.

Fernando Knopf was born in Buenos Aires, Argentina in 1977. His first’s connections with music began at his home in Buenos Aires, surrounded by Jazz, Classical and South American music. He began studying Piano, Music Theory, vocal training and Bass Guitar at age of 14 with private teachers from Buenos Aires. In 1996, Knopf left Argentina and moved to Tel Aviv, Israel. Read more…