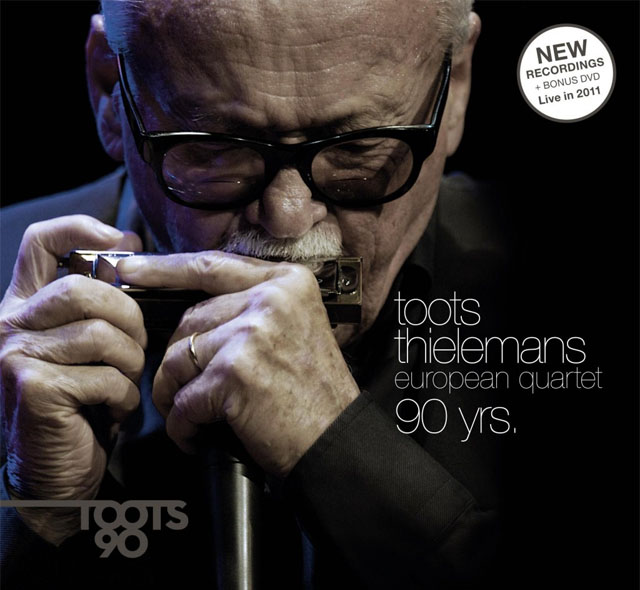 There can be little doubt that Baron Jean-Baptiste Frédéric Isidor Thielemans, otherwise known to the world simply as “Toots” is not only one of two “Greatest Belgian,” but, quite simply, one of the greatest musicians and instrumentalists in the world. Known for his virtuosity non pareil on the chromatic harmonica—he is mentioned in the same breath as Larry Adler—Toots is also a fine guitarist and also graces many of his songs with exquisite whistling. In the past decade or so, Toots has been backed by his very own European trio who have not only learnt his repertoire, but , as if by magic, keep up with his daunting virtuosity with exquisite presence and a soaring brilliance of their own. Pianist Karel Boehlee, bassist Hein Van de Geyn and drummer Hans van Oosterhout have been accompanying the grand master of the harmonica for several years; the bassist, who has been chronicling the whirl of concerts, makes that the past 20 years. During this period the European Quartet has released two records on the Challenge label. The first in 2010 simply entitled Live and now this commemorative imprint entitled Toots Thielemans European Quartet 90 Years. And it just seems to get better for the legendary harmonica player.

When Toots Thielemans plays the harmonica the little instrument driven by mechanical flues seems to take on a giant persona. For Toots plays with such drama and expression that the harmonica becomes at once a horn—neither brass nor woodwind, but at the same time a little of both—into which he pours his breath. He caresses each torrent of air that he expels from his mighty lungs giving it the form of various dramatis personae—sometimes man and at other times woman. In giving form to his breath Toots is able to control the expression of his playing beyond what most normal instrumentalists who use brass and woodwinds do. Moreover, as the wind slides in exquisite glissandos across the holes of the instrument, Toots infuses each note with the kind of emotions that a master pianist usually does. He seems to play some notes lightly and others more forcefully. Thus his phrases undulate and swerve in magnificent arcs and shoot forth in lines that criss-cross these arcs in acute angles, creating the most extraordinary musical architecture.

No longer seeming to concern himself with virtuosity, Toots Thielemans simply plays the music out of a sense of listening to his soul. This makes the music dance and sing in a very special way, which is one that is so driven by the spirit that it is almost four dimensional; containing in it a spectral aspect, which only someone who is secretly intimate with the instrument he plays can express and bring to life. Musically speaking Toots plays with impeccable phrasing, as only a great vocalist can do. In this respect he is most like that grand master of vocal phrasing, Louis Armstrong; but he is much softer in tone, like Sidney Bechet. There is also the small matter of harmony… Here Toots is beyond compare, playing with a palette of colours so vast it seems scientifically limitless. As his melodies and harmonies twist and turn like a double helix he trumps all of this with a rhythm that is always on or around the pulse of the song’s metrics. Toots mastery of all of these musical elements including the poetics of music are awash in “Waltz for Sonny” and in the gliding imagery of “In Your Own Sweet Way” as well as in the brilliantly re-created “One Note Samba”.

Just to make a point of showing the master’s touch on songs he makes absolutely his own, this record has an accompanying DVD featuring six magnificently filmed charts. Behind the almost vulnerable façade of his 90 years Toots plays before an awe-struck audience, followed almost spiritually by his great trio of musicians. On the standards, “Autumn Leaves,” “Midnight Cowboy” and “What a Wonderful World” it appears as if Toots has carved his name on the songs with his sublime lyricism. “Turks Fruits” sounds as stunning as ever, as does “Bluesette” every time Toots plays these charts and Sonny Rollins’ racy calypso, St. Thomas is played with unbridled genius.

It seems that the great Toots Thielemans just seems to have become greater with his advancing years. This desert island classic disc almost begs the cry: Long may he live.

Tracks: CD: Waltz for Sonny; The Dragon; Sno’ Peas; Wave; Dat Mistige Rooie Beest; In Your Own Sweet Way; What A Wonderful World; One Note Samba; The Dolphin; I Do It For Your Love; Old Friend. DVD: Live Registrations 2011: Autumn Leaves; Turks Fruits; Midnight Cowboy; Saint Thomas; Bluesette; What a Wonderful World.