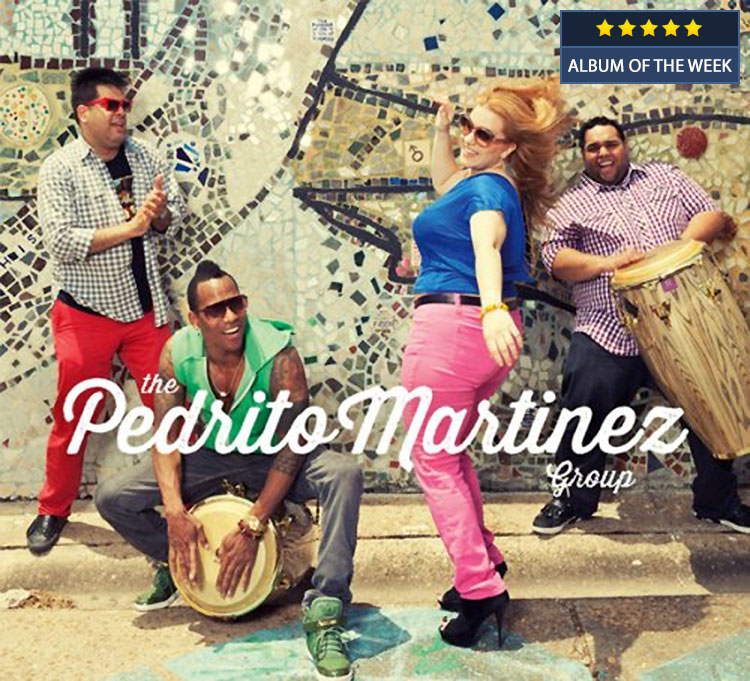 Pedrito Martinez is one of the most recognizable percussionists in New York today and he is also one of the percussionists most likely to be chosen to play on another musician’s recording. Fortunately he has had the time to make his own recordings. This one is simply entitled The Pedrito Martinez Group and includes some of the more talented musicians from Latin America. That Mr. Martinez is one of the most talented young rumbero and conguero to come out of Cuba in recent memory goes without saying, but what should not be missed is that he is also one of the boldest musicians, who are unafraid of trying new things. And because of this Mr. Martinez also attracts some of the finest players in any idiom. On this occasion he invited the great Wynton Marsalis to play on a really fine chart “Lengua De Obbara,” a guaguancó on which Mr. Marsalis plays with classic fire and seems to capture the Afri-Cuban rollicking rhythm like a true native Cuban trumpeter. Other luminaries that Mr. Martinez attracted for this date are guitarist John Scofield and drummer Steve Gadd. But this is not about the luminous guest stars; it is more about the Pedrito Martinez group and about its iconic leader more than anything else.

Pedrito Martinez was born in Havana, Cuba. He began his musical career at the age of 11, performing as vocalist and percussionist with such Cuban legends as Tata Güines and Los Munequitos de Matanzas. He came to Canada in 1998 with Jane Bunnett to tour with her group, Spirits of Havana. His decision to remain in North America to pursue his career proved to be an auspicious one when, two years later, the annual Thelonious Monk Institute Competition showcased Afro-Cuban Hand Drumming for the first time ever. Mr. Martinez entered and won first place. His proverbial musical star has been on the ascent ever since. On this album, Mr. Martinez proves that he is a gifted vocalist as well as being a fine drummer. His vocals are slanted, rich in irony and vocal gymnastics. Moreover, he is not simply a Spanish-language vocalist; his vocals, which he shares with the wonderfully gifted pianist and singer, Ariacne Trujillo are bright and powerful and full of humour, and quite beautiful. His “Travelling Riverside Blues” is a fine blues—made all the finer by John Scofield’s exquisite solo and Steve Gadd’s drumming throughout. But the real revelation is the English and Spanish vocals that also turn this blues into an energetic celebration. Michael Jackson’s “I’ll Be There” is another superb re-imagination, this one in the Afri-Cuban rhythmic idiom.

The Pedrito Martinez Group’s pianist Ariacne Trujillo is a true revelation as well. This conservatoire-trained musician is the one who is the glue that virtually holds the ensemble together. Her rhythmic attack is bold and inventive and she roars on the keys of her instrument, laying down the melodic lines for the exciting songs and energises the entire album with her wonderful vocals as well. Holding down the drum-line is another talented player, Jhair Sala, who also keeps things going when Mr. Martinez is on a vocal sojourn. Bassist, Alvaro Benavides also acquits himself with honours as he lines up with the two percussionists to keep the Afri-Cuban fire burning. With this more eclectic album, Pedrito Martinez appears to be going places he probably never thought he would be going and that is a welcome sign for this ever-talented musician.

Pedro Pablo “Pedrito” Martinez was born in Havana, Cuba, Sept 12, 1973. He began his musical career at the age of 11, performing as vocalist and percussionist with such Cuban legends as Tata Guines and Los Munequitos de Matanzas. He was brought to Canada in 1998, by bandleader, Jane Bunnett, and decided to remain in North America to pursue his career. Two years later he took first place in the annual Thelonious Monk Institute Competition for Afro-Latin Hand Drumming. Read more…