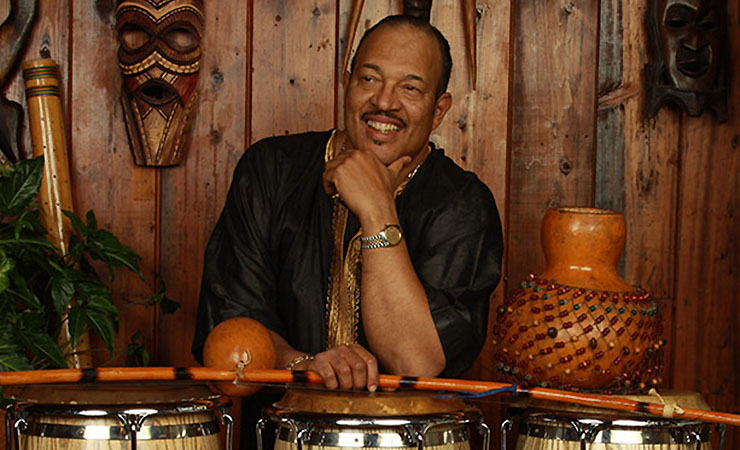 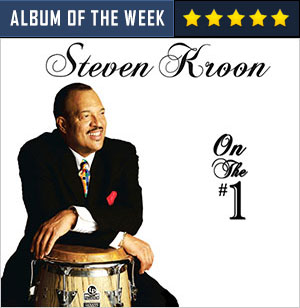 Steven Kroon’s bands have always been an exciting prospect. Lately his music has resembled a kind of sonic teeter-tooter. In the one hand the group’ sound has been informed by a radiant sound that came aglow because of Bryan Carrott’s vibraphone and Tim Ries’ piano and on the other end of the tilt there has been the authoritative rumble of Steven Kroon’s thunderous percussion, softened sometimes by Mr. Kroon’s angular muffled slap on his congas and the soft caress on a cymbal, or by the subtle hues created by the brushes of Vince Cherico on the expanse of skins. This exquisite balance has been the hallmark of Mr. Kroon’s music and it has brought in many admirers for his loose elegance that has, nevertheless, boasted a gentle swagger that has given Mr. Kroon’s music a gentlemanly wallop. This in turn has set Steven Kroon apart as a percussionist as well as a musician. His recording On the #1 is no exception.

This working band has also helped craft a lasting sound for Steven Kroon so much so that it can almost be picked out of the crowded Latin-Jazz “market,” which includes a rather large roster of fine bands. The reason for this is Mr. Kroon’s distinctive style. Mr. Kroon has definitely listened carefully to Tito Puente—(who hasn’t)—with keen ears and shrewd preparation for his own career as a percussionist. To call Mr. Kroon a “percussionist” might be limiting the term. Like some of the great percussion musicians—including Mæstre Marçal, Airto Moreira and Paulinho Da Costa (all Brasilians, for some reason), and Angá—Steven Kroon, a Puerto Rican by background employs his battery of percussion as it were one very large instrument. Add to that the fact that his hands are enormous brushes and when he uses them it is as if he were dipping them into a bottomless palette of paint. So varied are the colours that what results from the elaborate swishes and slaps and thumps is a range of colours that gives the music an enriched tone, elaborate hues and marvelous timbre. In this regard, Mr. Kroon truly stands apart like the aforementioned musicians. And this is a beautiful, rare thing.

On this record, Mr. Kroon is responsible for some fine arrangements, along with three extraordinary musicians: Oscar Hernandez and Marty Sheller and the Nicaraguan American pianist, Donald Vega, a superb samba entitled “Dust Till Dawn.” The charts have all been composed by the musicians themselves and are fine charts indeed. There is a wonderful arrangement—this one by pianist Igor Atalita—entitled “As Time Goes By,” a standard that has been reshaped with a fine sense of style and colour. In fact the pianist has reworked, or arranged three of the charts and they are all stand-out charts by any stretch of imagination. The languid beauty of pianist George Cables’ chart “Phantom of the Island” is another reason why this album is rather memorable. However, the best reason to cherish this album is Steven Kroon’s mastery of percussion and his handling of this supremely talented ensemble. Long may they play.

Track List: On The One; Roots; I Know You Do; Phantom of the Island; As Time Goes By; Dust Till Dawn; Where There is Love; Camel Rise; Touch.

Steve Kroon was born in Spanish Harlem to parents who had moved to New York City from their native Puerto Rico. His surname comes from his grandfather, who immigrated toLa Isla Encantada from the Dutch-speaking Caribbean island of Curaçao. At the age of nine, the family moved to Queens, where the youngster’s interest in music was further sparked by the presence of many noted jazz and R&B musicians. “In my neighborhood,” he recalls today, “I had Eddie “Lockjaw” Davis as a neighbor, and Lester Young was four blocks away. James Brown also lived in the area. But I came with all of my Latin roots, thanks to my father. I was fortunate in being able to hear the whole spectrum of music.” Read more…