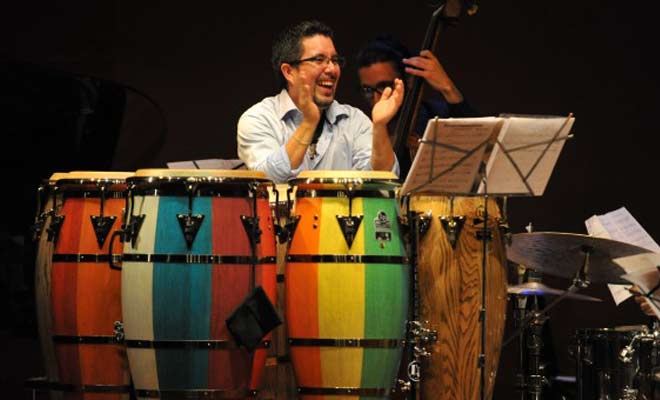 Drums. They were not quite the first instrument, but even so much as a scatological suggestion of sound can quicken the blood; and their thunder and lightning can not only send men to war. But on a clear day even a magical caress of the skin of the drum can take news of birth and rebirth far and wide. Samuel Torres probably knew that when he chose that instrument to say—even sing—many things. And now, not long after his debut as a leader, he claims the ultimate prize: the writing of a piece in long form to tell the story of suffering and triumph of human endeavour of the Afro-Colombian peoples as they journey through life. 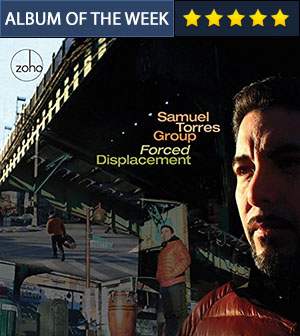 Forced Development consists of some of the most mature playing in tuned hand percussion that Mr. Torres has played in years. But on this album, his own personal development takes second place. Here he is telling an important story. It is dark days for the Afro-Colombian people; dark days indeed for all South American people of African descent. But what is particularly galling is that this is no Chiapas, and there is no figure like Zapata to fight for their cause. There are heroes for sure; among them are the women of the region and Emilsen. But their fight against the paramilitaries, guerillas and the army is a lonely one. No one, after all, really cares about the African-American, no matter which part of the continent they live in.

So Samuel Torres has taken it upon himself to bring this fight to an unsuspecting public. The virtuoso conguero tells the story on four—sometimes five—conga drums. Behind impressive technical accomplishments is a mastery of letter and spirit that cogently demonstrates the depth of his understanding supremacy in ensemble playing while letting the narrative unfold. Instrumental balance is always carefully adjusted, the congas offering a distinct but not intrusive low line. Tempi are carefully thought out too; and the playing always exact—as in the first (“Overture”), third (“Velada de Tambores”) and the ninth (“El Orgullo del Tambor”) tracks. All of this with the splendid assistance of the indescribable Colombian percussionist Jonathan Gómez, a master of anything that can be shaken, beaten and caressed.

Still, nothing is rigid. Instead, the music moves with an airy fleetness and meticulously controlled dynamics. The hushed pianissimo endings to profoundly conceived slower movements is but an example of the mutations of tone colour to be experienced. In these circumstances it may be invidious to single out pianist Luis Perdomo and saxophonist Yosvany Terry and yet Samuel Torres’ probing leadership may cannot be overstated. But make no mistake this recording would not be the same without Jonathan Gómez and it is his presence throughout that enhances each movement in this extended work.

The icing on the cake is the ingenious “Finale” arranged for the ensemble, but featuring the percussionists much of the time. Inventive and captivatingly crafted cameos they are too. I lean towards “Finale” as much as I do “Overture” as much for the content as for the sheer virtuosity of Jonathan Gómez and, of course, Samuel Torres, as well as Obed Calvaire, all of whom form a fulfilling partnership to make this a most desirable disc.

When the imposing talents of one of today’s most versatile Latin Jazz artists meld with the organic richness of some of the world’s greatest cultural melting pots, the results are guaranteed to be as fresh as they are revealing and magical. Read more…