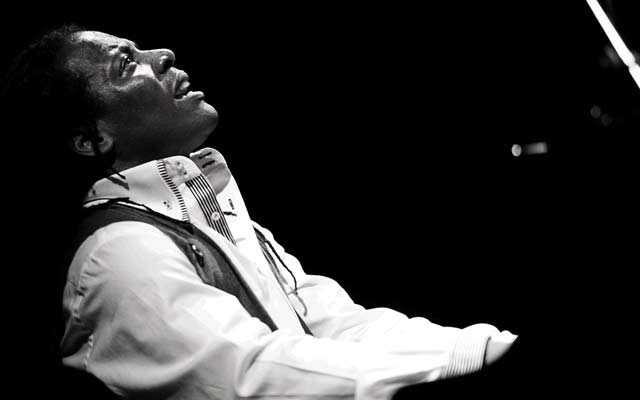 It will not be surprising if you are drawn to Take Off, the 2015 recording by Ramón Valle. The reasons are two-fold. For all its imposing dimensions and grandiose final apotheosis (especially when viewed on the beautifully filmed DVD), there is something fundamentally intimate about the music contained within. As such it demands both larger-than-life technical accomplishment and the pianist’s instinct for sharing rather than grandstanding. That, at least, is the message that comes from this startlingly fine disc. Without going in for extreme tempi of displays of temperament, Ramón Valle and his trio get far deeper beneath the surface of the music than some of their contemporaries on their discs. 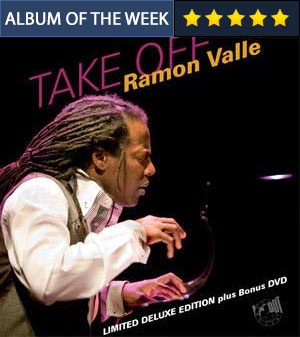 Maybe some will find that individuality – and Ramón Valle’s is a singular voice – is accompanied by an exaggeratedly halting quality, and effective balance by some dryness and emaciation of the piano’s textures. But the gains in terms of individuality of voice and in sheer clarity are real, and throughout there is a quality of sympathetic warmth to this music that it comes as a shock to realise how few pianists might manage to nail it. In “All the Things You Are”, “Steps in the Night” and “Trance Dance in Blue” for instance, there is some heavy punctuation of phrases and glorious emphasis on the subsidiary voices in the themes. The level of idiomatic insight is high enough that it would take several reviews to do justice to this.

In short, this goes to the top of my list of recordings or original music and re-imagined classics – especially “All the Things You Are” and “Hallelujah”. In general I would say that Ramón Valle ranks high up on my list of Cuban-born pianists as the superbly efficient Elio Villafranca and not far short of the irresistibly fiery Gonzalo Rubalcaba and – unrivalled for inspiration and abandon – the live Chucho Valdés as well. But pianists and suggested comparisons apart, the rest of the music here is also a fine achievement. Shifts of tempo and character that others may negotiate only with uneasy compromise are here completely convincing. Obvious surface excitement gives place to a grasp of archetypal depths that demand restraint and wisdom as much as they do temperament.

Most impressive of all is the matching of tone-colour to mood by Ramón Valle so that the fragility typified by the fragility of the opening phrases of, for example, a beautiful version of “What Are You Doing for the Rest of Your Life” and the stoicism of the rest of the piece is captured with rare precision. There is also the power of bassist Omar Rodriguez Calvo and rhythmic perfection of Ernesto Simpson that not only matches the power and visceral energy of Ramón Valle but also stand out on their own. Only the trios of Gonzalo Rubalcaba come anywhere close to what Ramón Valle and his trio have to offer.

On the accompanying DVD contained in this package we see Ramón Valle in his element as he leans into his piano almost sending out caressing vibrations to it as he coaxes wondrous things from it. We also see imagery that is beautifully poised in perfect consonance with the music. In essence we are privy not only to irrepressible energy of the music but also to the visual beauty of the camera cinematographer James Knaap. Lest we forget, there is also the extraordinary production skill of Suzi Reynolds who has put together this impressive package. It is always a blessing for a musician to have a guardian angel on his shoulder while he delivers the art undisturbed.

Cuban pianist Ramón Valle is a seasoned veteran with the explosive energy of a racehorse straight out of the gate. At this pivotal point in his career, Valle is on the runway and primed for TAKE OFF. Ramon’s stage presence is commanding, whether within the ranks of an orchestra or leading a trio. His performances and stage presence are charismatic, his music – intoxicating. No longer a diamond-in-the-rough, he is the perfectly cut gem. “Sometimes I feel like a troubadour,” he says, “because I tell stories, but stories without words.” Read more…