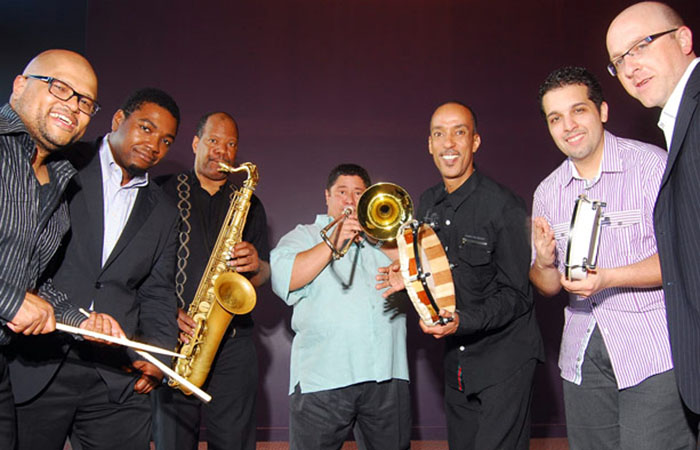 Trombonist Papo Vázquez is the mightiest of the Mighty Pirates Troubadours. His sound is bold; his tone is brazen and ground out as if from a mill as ancient as the Afro-Latin tradition itself. He growls when the music provokes him, yet he can be tender when you least expect it. His lines are broad and translucent. His colour palette is magnificent and the colours are drawn from a classic landscape full of passionate brushstrokes. As an album, Spirit Warrior is conceived as a vehicle for the trombonist -a Philadelphia native with Puerto Rican blood in his veins- and presents a wonderful mix of imaginative pieces played in the always-simmering style, all infused with the Latino spirit. That spirit manifests itself variously in lyrical-sentimental ballads such as the elegiac “Goodbyes for You…” and the melancholic “In This Lonely Place” to the sharp and angular vigour of “Bumbo Con Bamba” with its juggernaut-like momentum that Mr. Vázquez audibly relishes, and the deeply mystical closing number “Kerepakupai Vena” in which at last the spirit of the diaspora bursts into view. In between lie the delightful “…Mole,” a warm-hearted, hand-clapping roistering song and the romantic, high-flying song “Roller Coaster”. 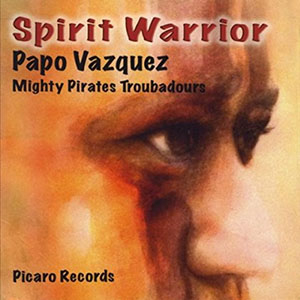 All songs are given in arrangements by Papo Vázquez, also composer of all of the highly-charged material. So it is not hard to understand why he shows real empathy for the material and that superb band of Mighty Pirates Troubadours which also provides an excellent platform to support the dark-hued and gripping performances that Mr. Vazquez comes up with. While there are no booklet-notes to accompany these fine performances, Papo Vázquez reveals his familiarity with all dance forms and his music echoes this brilliantly. The other members of this group also give excellent performances of impressive consistency under the leadership of their director, Papo Vázquez. They have an uninhibited, fresh sound, coupled with the skill to sustain lengthy phrases with even tone. And frequently you do feel that beauty of phrasing has been given a higher priority than might be conveyed in the texts’ emotions and searing power. And there’s no harm done in allowing the music (and sometimes) the words themselves to speak freely for the music. Together with pieces for the full orchestra there are solo songs featuring one or two of the outstanding soloists. And every time they are featured these musicians display tremendous maturity in the timbre and texture of the various instrumental performances.

As a trombonist Papo Vázquez has a voice of extraordinary purity, flawless in his intonation, perfectly balanced across his entire range and always “singing” with effortless composure. His performances are magical, utterly charming and superbly sensitive. He also brings considerable warmth and a potent dramatic presence to the Mighty Pirates Troubadours. In the performances that he shares with other members of the band he makes the voices coalesce so completely that the effect is quite spectacular. This is a superb album by one of the most expressive voices in Latin music. The disc also explores the work of an accomplished composer. Both these elements are perfectly portrayed in these breathtaking performances.

About Papo Vázquez: Trombonist, composer and arranger Papo Vázquez is more than thirty-five years into a career spanning the jazz, Latin, Afro-Caribbean and classical music and recording worlds. Recent honors include an invitation by “The Presidents Own” US Marine Band to lead and direct the band on its first Afro Caribbean Jazz performance in the long history of this band, in Washington, DC. In May 2013, was commissioned by Arturo O’Farrill’s Afro Latin Jazz Orchestra and Symphony Space to compose new music for “Nueva Musica” concert series, in New York. In 2011, was presented with a Latino Masters Award by the Pregones Theater under The National Endowment for the Arts American Masterpieces: Presenting program. In 2010, was commissioned by Mr. Wynton Marsalis to compose a work inspired by Cuban painter Wilfredo Lam… Read more…