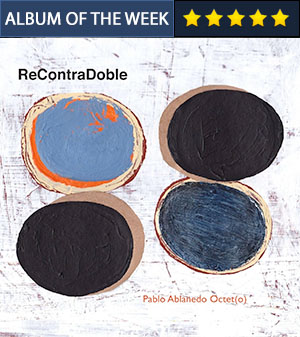 The beauty of ReContraDoble lies in its exquisite counterpoint that pits the brass against the woodwinds; the guitar against the piano with the drums and percussion and the bass, goading the dangerous dance of instruments onward and forward until they all become interminably intertwined with each other like some mutating, complex instrumental DNA molecule. Add to this the fact that the music appears to be played by musicians reflecting, each one reflecting the melody against some kind of glacial surface so that it is shattered by the rhythmic intensity of the music. This masterful invention is the work of the pianist and composer, Pablo Ablanedo, who has melded the folk music of Argentina with the vivid rhythms of the pasodoble recreating the classicism of the Spanish bullfight in the context of his complex, intellectual compositions that ripple and crinkle with magic and mysticism.

There are times in the score when the music feels so lithe and delicate and tenuous that the charts feel as if they are literally angular and elastic, and the notes inhabit the musical tapestry forming a kind of shifting sand in the rhythm section. Ironically it is also this section of the ensemble that is the glue that holds all the other musical instruments together. This is especially true of the composer’s pianism that is full of rhythmic and harmonic subtlety that seems to be barely there, but at the same time forms the diaphanous fabric of the music that flows throughout the background—and sometimes the foreground—of each of the musical compositions and interpretations. There is no tango, no waltz, no chacarera, no Milonga, but all of these rhythms and forms are spectrally present throughout. In fact the music of Mr. Ablanedo seems to be written and performed in four dimensions—those that are obvious to the mind’s ear and those that are suggested and understood only by the spirit and its soul. Such is the beauty and power of this music.

Of all of the musicians who inhabit the music Mr. Ablanedo is perhaps the most subtle; even furtive. He is always playing but magically and mysteriously seems never to be there. This is something unheard of as most composers who play their own music are almost always the stars of their compositions. However, Mr. Ablanedo is so nondescript, yet like the proverbial bullfighter, always in control and prepared for the newest attack that might come from either saxophone, or flute, or trumpet—the mythical bulls in this music’s arena. This also suggests that the music is deep and full of duende. Many of the charts, like “Antiphona,” “ReContraDoble” and “La Vaga” are ponderous, complex and full of dramatic melancholy. This does not make them sentimental, but rather full of instrumental dramaturgy. In their inner workings the music seems to be cast like shadows on a fabricated glass wall of sound. This device is what accounts for the immense beauty of the songs and also for the uniqueness of the music throughout.

Besides the pianist, musicians who obviously stand out are the horn players, especially Daniel Ian Smith, who grasps the mysticism of the music as if he were in fact the writer. Trumpeter, Phil Grenadier, is the only brass player and who must play in constant counterpoint to the woodwinds; is also a powerful force, and smashes his way into the glass mirror of the music. Bassist Fernando Huergo plays with great power and is instrumental in keeping the rhythmic fire and heat of the music at constant high levels of passion, holding himself up with great dignity. Huergo is a key player in the drama of the music, as are drummer, Franco Pinna and percussionist Bertram Lehmann. But it is the austere playing of Pablo Ablanedo that is most outstanding as he regales the other musicians with mesmerising and both dark colours that draw them into a beautiful and intricate web of music.