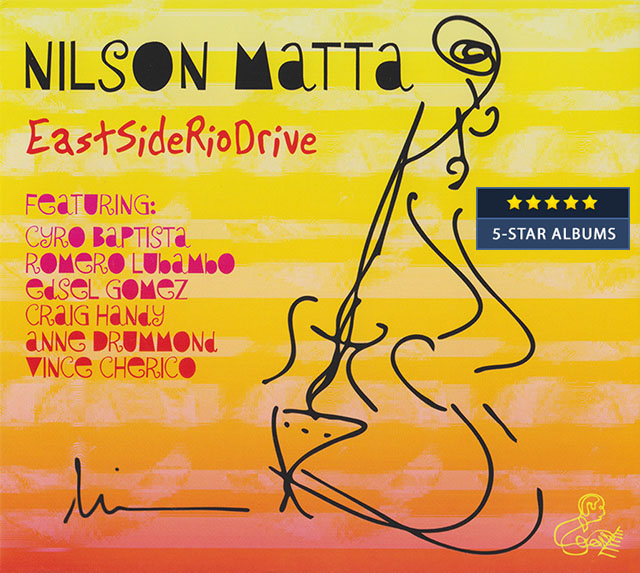 feel•ing (fee-ling): a function or the power of perceiving by touch. A particular sensation of this kind: a feeling of warmth. The general state of consciousness considered independently of particular sensations, thoughts, etc. Readily affected by emotion; sympathetic; a feeling heart. Indicating or characterised by emotion… So how does Nilson Matta set about creating feelings? There is no secret recipe, but all the ingredients are there: tempo, dynamics and emotion. Another activation is by the vibrations generated as fingers slide and leap across strings. This is the means by which Mr. Matta can sense fine texture and timbre in which the spatial scale creates vibrations which are the optimal frequency for sensitivity… If you were thinking of pure emotion, then you were right. All of it that sounded complex it absolutely is, but Nilson Matta makes it all so simple and so gloriously effective. The Brasil-born, New York-based composer and bassist applies equal grace, rhythmic energy and flavourful inflection. This is what makes Mr. Matta especially charismatic, boldly inventive and utterly captivating. He plays in a stylish, vitally communicative way and manages to leap through the loudspeakers and grab the listener by the scruff. His playing abounds in linear awareness, spontaneous inflections of phrase that never sound in the least bit mannered, and a kind of kinetic response to the music’s combative, hair-trigger dynamic contrasts.

It does not take close listening to notice, for example, how the organic ebb and flow and extraordinarily raw pizzicato enlivens “Sertão” and Charles Mingus’ “Boogie Stop Shuffle”. The music is spiced with explosive accents, rhythmic verve and insightful voice. The fugal finale’s joyful sweep (of the latter piece) might be described as pure Mingus, with the right notes, an observation that equally applies to Miles Davis’ “Blue in Green” piece’s demanding outer movements, both of which come within spitting distance of each composer’s metronome markings. By contrast the bassist reins himself in (but only slightly) for João Donato’s “E Menina” and Antonio Carlos Jobim’s “Mohave” only to let loose and whack the hell out of the rapid upward major scale right before the main theme recapitulates. And although the bassist adapts a fairly brisk basic tempo for the adagio sostenuto, the phrases still expand, contract and breathe naturally. The rest of the music on the record proves no less distinct, especially in each of the dramatic soli sections’ seamlessly integrated and unified tempo relationships. As with the rapid left-hand figurations uncommonly clear and unblemished ascent in “Verde” matched only by the ultra-concentrated tension that Edsel Gómez and Vince Cherico bring to the piece. And given Nilson Matta’s genuine passion and involvement it is easy to see how memorable this programme has been made.

I would be remiss if I did not admit to falling prey to the charms of Anne Drummond and her flutes. Every time she sets out to play—and I mean in every song—this remarkable and sadly under-recognised virtuoso musician brings something special to the programme. Ms. Drummond is extraordinarily lyrical and brings colourful contexts to the music, without ever neglecting to swing. And then there is the rising star of Craig Handy. Whether it be on tenor saxophone or bass clarinet, or flutes, Mr. Handy plays like a king among princes. He all but steals the show in every appearance bringing a fresh, sometimes haunting and always invigorating bluesy sound to the music. “Blue in Green” is a classic example of this. His is a remarkably vibrant and flexible voice that never ceases to amaze. With such a cast and crew populating East Side Rio Drive it will be impossible to resist spinning this CD time and time again. It is suave, elegant and replete with a buoyancy and atmospheric vibrancy that informs every piece in the repertoire.

About Nilson Matta: A pioneer in the art of playing Brazilian Jazz on an acoustic bass, Nilson Matta has been a force in the evolution and popularity of Brazilian Jazz and considered one of the greatest bass players in the world and Downbeat called him “a powerhouse bass player”. At an incredibly young age, Nilson was already recognized as one of Brazil’s most impressive bass players. During his years living in Brazil, he played with luminaries such as João Gilberto, Hermeto Pascoal, João Bosco, Johnny Alf, Helio Delmiro, Luis Bonfá, Chico Buarque, MPB-4 and many others. Since Nilson moved to New York in the 80’s and since then he has performed and recorded with renowned artists as Sadao Watanabe, Paquito D’Rivera, Mark Murphy, Don Friedman, Oscar Castro Neves, Paul Winter, Claudio Roditi, Gato Barbieri, Herbie Mann, and many others… Read more…