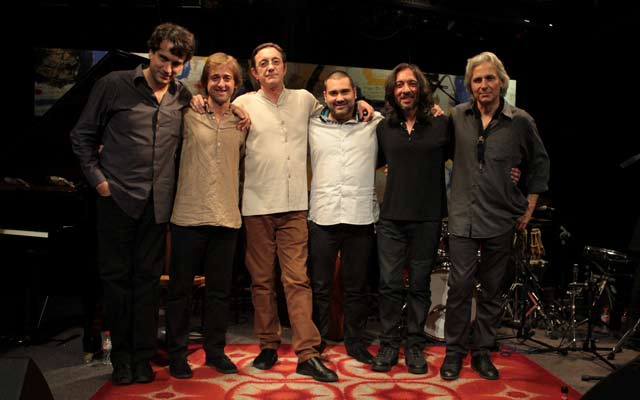 Not since the pianist Chano Dominguez set his piano on fire with his volcanic performances of flamenco melted dramatically into the jazz idiom has an ensemble of Spanish musicians (and a Frenchman) fired up an array of jazz classics with such obsessive genius. These mercurial, witty and touching pieces unravel with searing intensity on Marc Miralta and Flamenco Reunion or what was once called “New York Flamenco Reunion”. This is a superb disc, released in Europe two years ago, but only this year in North America. 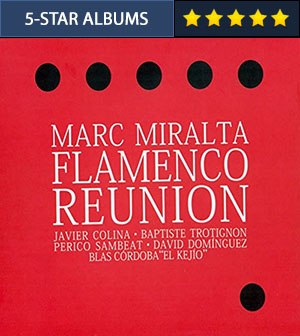 The nine exquisite shortish gems have pretty much spoilt me forever and I don’t know how I will ever listen to interpretations of Charlie Parker, Thelonious Monk and Wayne Shorter with the same joy again. I might be bold enough to also suggest these will be benchmark recordings against all recordings by foreign musicians will be measured. First of all you have the brilliant, incisive performances of drummer and tabla player Marc Miralta, percussion colourist David Dominguez and bassist Javier Colina on all of these superbly rendered pieces. And I mean they are truly masterful in the twists and turns of compás by tantalising changes from 2/4 and 4/4 zambras, tientos and tanguillos, 3/4 fandangos.

Perhaps greatest of all are the 12-beat rhythms usually rendered in amalgams of 6/8 + 3/4 and sometimes 12/8 most common in flamenco. But that’s not all, listening to the absolutely magical manner in which saxophonist Perico Sambeat holds his own in his contrapuntal exegeses with Charlie Parker’s mesmerising bebop rhythms and the insouciant angularity of Thelonious Monk’s “Pannonica” and Wayne Shorter’s “Infant Eyes”, and perhaps most magical of all is the brazen microtonal vocalastics of Blas Córdoba… the portamentos and incredible tessitura on Antonio Carlos Jobim’s “Retrato Em Branco E Petro” forming brilliant melismas… Merely the opening bars of this piece is enough to send the listener into rhapsodic ecstasy.

This is absolutely “transcendent” music played by musicians who go beyond the range of understood virtuosity, an expansion into music seemingly unplayable, quasi-symphonic in scope and scale. So vaunted is the instrumental décor that these musicians even manage to turn that term on its head. What unmistakable lines of continuity rather than rhythmic division. What experimental dark-hued utterances of duende, dealing with obsessive patterning, harmonic ambiguity that finds resolution in dramatic and cathartic endings. What a sense of wonder as these musicians make the case for this music with unfaltering poise. This is music that ought to have been brought to America long before it actually has touched these shores.

This music is a real achievement, then, in representing distinctive present-day figures at something like full stretch. With any luck it will find itself to commercial success, something that these musicians, coming out of the shadow of the great Chano Dominguez underline with extreme creativity as they embark on this difficult odyssey. However they do have the reputation to succeed, a reputation that will herald them as some of the most talented musicians of this century.