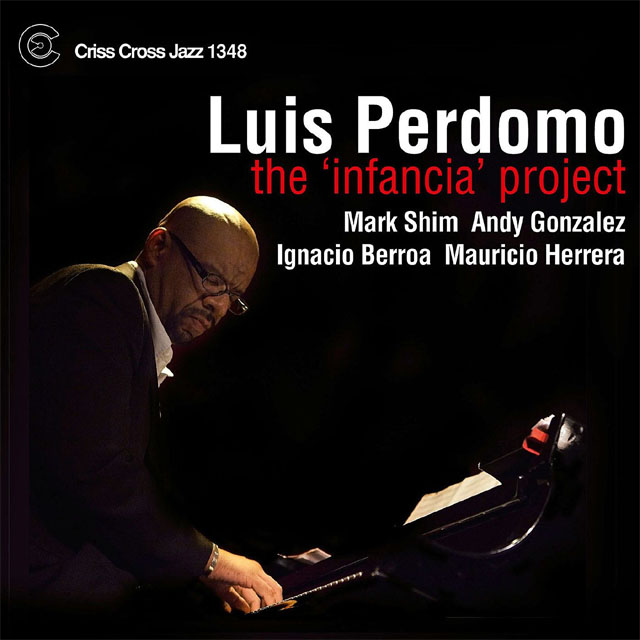 It is hard to go back and dig deep once something is put in the past and locked down. Miles Davis showed this when he was asked ever so often to perform music that he had made with Gil Evans in the 50’s and he only did so towards the end of his life when Quincy Jones and Claude Nobs seem to have prevailed upon him to do a complete program of that music at Montreux in 1991. So Luis Perdomo can be forgiven for forsaking this kind of recording for several years until Criss Cross producer seems to have prevailed upon him to reach deep into his past. But as he finally gave in and decided to pay homage to his early influences the music has literally exploded as it collided on this incredibly beautiful album The ‘Infancia’ Project. Ever since he graced the New York scene towards the end of the 90’s Mr. Perdomo has been followed closely by the cognoscenti as his music began to unwind, showing that he had an unbridled virtuosity, a finely tuned expression and a deep and discerning sense of history. Mr. Perdomo seems to be made of music and has sprung from musical wells fed by the gently shuffling waters of Latin American music as much as it is by the spirited bubbling of the jazz idiom both streams originating from the classical, romantic and impressionistic wellsprings of Europe.

The fusion of these influences have long since waned and the unique voice of the pianist has fully emerged and this is probably why Mr. Perdomo chose to make such magnificently iconic recordings as Focus Point (RKM Music, 2005), Awareness (RKM Music, 2006), Pathways (Criss Cross Jazz, 2008) and, Universal Mind (RKM Music, 2012). But it is this music on The ‘Infancia’ Project that makes for unique and magnificent listening as it reveals a part of Mr. Perdomo that is not often seen or heard in his music: His ability to tell a story as if it were playing out like a series of moving pictures. It probably happens when dwelling on the past that an artist can experience moving images of places and incidents associated with past experiences, especially those deeply etched in the heart of being. Mr. Perdomo relates these as if he were making a painting that is continuously filled with the water colours of life and are being unveiled on parchment that remains constantly warm and wet as more colours are applied only to drip and fill the nooks and crannies of the paper upon which it is applied.

As his music on this record develops from the music of Miles Davis (“Solar”) to Bud Powell (”Un Poco Loco”) to Mr. Perdomo’s own ponderous and multilayered harmonics on “Berimvela” and the portrait of the “Meggido Girl” his music becomes a more complex and wonderful melange of densely textured and harmonically intricate music. The suggestive water colours turn into the more viscous depictions of mood, solace and emotions as deep as indigo blues. The Afro-centric rhythms become more complex; the leaps off elevated planes into darker, more ominous territory become more frequent as Mr. Perdomo digs deep into his soul for that augmented series of notes that turn brightly coloured visions of music into more hypnotic and more substantial music.

Assisting Mr. Perdomo on this eventful musical journey would be key to re-imagining his own past and his thrusting forward into the future. So he would have to choose his shipmates with a great deal of discernment and erudition. And the pianist has certainly chosen well. Mark Shim on tenor saxophone adds a gravitas of tone and manner that shapes the music with gilded edges and a sense of maturity; drummer Ignacio Berroa and the brilliant percussionist Mauricio Herrera add the wondrous polyrhythms of Afrocentric music as it is buffeted by the gilded Europeanism of the tenor horn and the ingenious bassist Andy González, while providing a rock-steady rhythmic anchor, also adds tremendous harmonic texture to the complex melodies that Mr. Perdomo has written. Mr. González also plays with such a delightful sense of melodic ingenuity that he seems to play a critical role in shaping and re-shaping the melodic content of the music as if he were the sole composer himself. Still it is the mighty pianism of Luis Perdomo who has made this project a resounding success. Whether he is playing with a lighter touch on the Fender Rhodes or controlling the grand keyboard of the piano with fascinating degrees of expression and emotion, Mr. Perdomo has given notice to become a musical architect of the highest order.