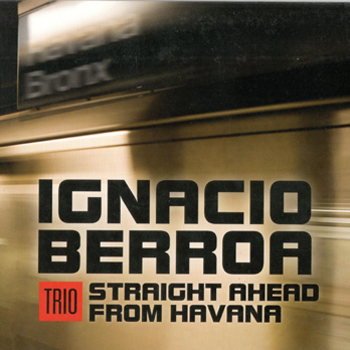 Ignacio Berroa has a sense of humour – a bit on the wry side – but a sense of humour nevertheless. Clearly a more than a little of Dizzy Gillespie, with whom Berroa played as a member the United Nations Orchestra, seems to have rubbed off here. Berroa’s little prank here is to call his recording Straight Ahead From Havana, leading one to believe – if one is not careful reading the title – that we’re in for a feast of Afro-Cuban fare. The feast is real, but the music is fierce, swinging Jazz, almost all of which is grounded in 4/4 metrics. And even when he peels away the skin of Martin Bejerano’s ingenious arrangements for the clave to explode, it’s with a twist. So prepare to expect the unexpected Ignacio Berroa for all but one hour.

This is wickedly brilliant music and Ignacio Berroa and Martin Bejerano are not extraordinary bedfellows here, but give voice to each other like few drummer/pianist combinations do. Ingenuity is certainly the name of the game and your heart will skip a beat especially on “Negro De Sociedad” which teeters on the brink of a full-frontal Afro-Cuban version of Arturo R. Ojeda’s masterpiece before being bent to Berroa’s will as a Jazz tune Straight Ahead From Havana. Even Rubén Blades seems somewhat caught unawares by the twist given the rhythm by Bejerano before recovering and giving a brilliant account of himself. And that is just the warm-up; things get a little livelier and a lot more complex on Marta Valdés’ “Deja Que Siga Solo”.

This is an intimate group and as such the genius of its component members is right up in your face. It’s a great time to get reacquainted with the majesty of Ignacio Berroa’s drumming prowess. Every component in his set is bent to his will, but without any semblance of a head-bangers ball. Rather one is witness to what can only be described as a performance of silken power and a kind of epic musical theatre where melody taunts rhythm and vice-versa in an interminable give-and-take even as the dramatics involves such disparate sounds as swishing of cymbals, a soaring – almost vocal – snare drum and the thunder of floor-toms, punctuated every now and then by a depth bomb on the bass drum.

If you missed him before, prepare also to be dazzled to the brink of divine madness by Martin Bejerano’s musicianship: not only by his nonpareil pianism that takes both expression and technique to a whole new level. As if that were not enough, even before the dust of a solo settles, you’ll marvel at how much space is between the notes and phrases that tumble out of Bejerano’s palpitating heart and onto his fingers on the keyboard. Hats off to bassist Josh Allen for giving as good as he gets from both Bejerano and Berroa and to Lowell Ringel and “Coky” Garcia as well. And finally spare a kind thought for Jimmy Branly who forsakes his place behind the drumset for the engineering controls to capture the music in a recording of great warmth and character.