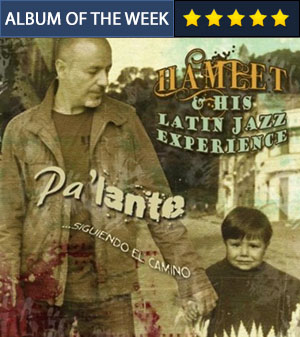 There is a visceral energy that courses through the primeval gut of Hamlet Fiorilli Müller’s record Pa ’lante… Siguiendo el Camino. This is largely due to the unfettered vitality of the horns and the percussion of his band, The Latin Jazz Experience. Of course, there is also Mr. Fiorilli Müller’s own musical dynamism and that of his bassist, who seems to not only egg him on, but also push the percussionists to their limit and beyond. Latin American music requires a special kind of wildfire that is spread by a burning trumpet and the horn of Darko Sedak Bencic is alight with a roaring blue flame here. Even when he plays the much softer flugelhorn, Mr. Bencic is all over the instrument with such force that the mellow tones and textures come alive with a certain animism that adds something truly special to the music on this album. There is also a joyousness to the music that is a direct result of the folkloric content that Mr. Fiorilli Müller melds into the idiom of jazz. The pianist has a Colombian musical background—having been born in Bogotá—before he made the continent of Europe an itinerant home.

The pirouetting cadences of “Baila Mamá” are a direct result of the dramatic infusion of thick Colombian Cumbia textures and rhythms. Mr. Fiorilli Müller leads this exquisite folkloric chart and he is quickly followed by the percussionists and the jubilant vocals of Ives Claure. His title tune, “Siguiendo Pa ’lante” also shows the composer to have a flair for written melody—in addition to his virtuoso pianism, which is marvellously rhythmic. This is also one of those charts where the horns step up to the plate. There is a wonderful solo by trumpeter Massimo Greco and a delightfully intricate tenor saxophone solo by Lukas Gabric, whose Florentine lines swathe the onrush of Mr. Fiorilli Müller’s piano solo that follows it. The music of Colombia—Cumbia, Porro, Vallenato, Champeta and the music of the African Diaspora—nestle cheek-by-jowl with swinging jazz idioms. Mr. Fiorilli Müller appears to be a master-weaver when it comes to the fabric of music and he uses this approach to create a wondrous musical fabric that comprises a myriad of rhythms and textures in his music. “Siguiendo Pa ’lante” and “La Jorikamba” are outstanding examples of this masterly presence in his oeuvre. There is also the blending of vocals with instrumental soli. This is something that requires maturity and sophistication and Hamlet Fiorilli Müller has a surfeit of both.

Perhaps Mr. Fiorilli Müller may explore the area of vocal music with his succeeding albums. The musician seems poised to enter the Colombian musical territory with more complex use of the folkloric musical idioms. The pianist seems to have already taken a leap of faith from his earlier album, Descarumbiando. There is also the fact that Mr. Fiorilli Müller seems entirely capable of extended compositions. On this record, Pa ’lante… Siguiendo el Camino he has crafted a three-part suite that beautifully blends instrumental music with choral music. The exquisite development of the tripartite suite “Misa Callejera” is based on a wistful melodic phrase that is developed in intensity and complexity with the four-part harmonies created by the Audio Quattro choir that soars as the suite moves from part I to the II and III parts.

Mr. Fiorilli Müller also makes interesting use of his synthesizers developing a kind of vocal sound that adds dramatic textures to the vocals already beautifully decorated by their own harmonies. This is quite something as the synthesizer is often maligned because of the useless nature of its deployment in many contemporary ensembles. However it is artists such as Lyle Mays, Ralph Towner and now Hamlet Fiorilli Müller who bring a new kind of respectability to this instrument so essential to modern ensembles. Then there is also the matter of Mr. Fiorilli Müller’s pianism, which gets ignored when the focus is on his musicianship. A hearing of “Agape” should be a strong reminder of his skill with expression and dynamic as well as overall virtuosity. With all of this going for it Pa ’lante… Siguiendo el Camino is sure to be an enduring work as well as a stepping stone for Hamlet Fiorilli Müller’s development as an artist as he transitions onto bigger and more complex music in the years to come.