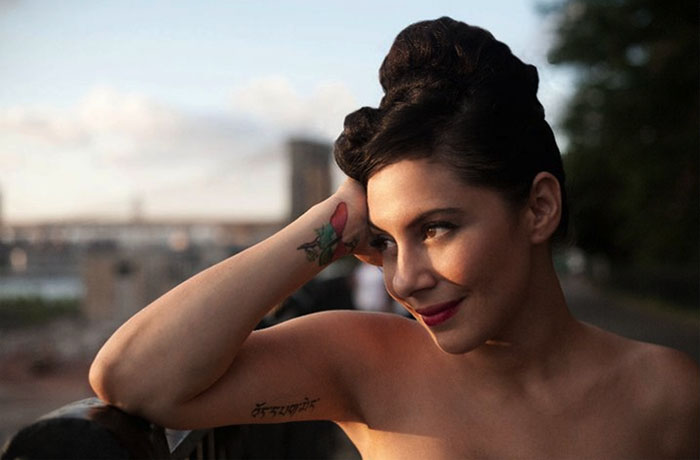 Eva Cortés is not Lucia Pulido. Nor will she ever be. But frequently on her album In Bloom she shows flashes of such brilliance that it is hard to comprehend, why this sublimely talented chanteuse should be not better felicitated. Ms. Cortés is a Spanish language singer but on this album she also steps out as a highly skilled singer of English language songs equal to or even perhaps even better than her performances on the Spanish language repertoire. The vocalist approaches her material with distinctive melodic energy and carries it into an improvisatory world very much of her own making. Every once and awhile Eva Cortés even soars so high that it feels that she has ascended to a truly rarefied realm. Her ululation, uncommon in Latin music is tempered by a low and unwavering execution often associated by flamenco vocalise. In her English language repertoire, Eva Cortés sings music—“Pretending,” for instance—in a relatively straight voice tending more towards a sweet, folk-like sound rather than a jazz one. But at other times she reels off into an expressive spectrum of riffs, scats and virtuoso extended vocal techniques. While this isn’t jazzed-up Spanish-language repertoire, there are moments when the music approaches high-class contemporary improv that draws on those styles to create a fascinating range of sounds and textures that constantly develops within a certain emotional framework of restrained intensity.

The melodic disc opens with a ravishingly hushed performance of her own song, “Sol,” which is arguably one of the best on this disc. After that there are both rarities as well as beautifully crafted repertoire composed by the singer as well as a couple of standards. The finest performance without a doubt—and rather surprisingly as a matter of fact as it is sung in English—is “Pretending”. This is rapturously beautiful and sexy. There are other quite intimate and sultry performances, usually of Spanish-language songs and each is informed with picturesque detail. Eva Cortés’ smokey vocals are always spectacular and reach unassailable peaks every now and then. There are many memorable moments on this disc. One of them is on “Hablo De Tí,” which is beautifully dreamy and features an exquisite interplay with pianist Romain Collins. The choice of Mr. Collins is an inspired one. The pianist plays music as if he were melted into the heart of the melody. Because of this he is able to produce music that comes from the deepest recesses of his own heart. And in this way his playing suggests that he is made almost completely of music. This is something that may also be said of bassist Luques Curtis, whose playing is also bewitchingly beautiful throughout. While on the subject of bassists, the appearance of Christian McBride is a welcome one and although he almost steals the limelight with his own exceptional virtuosity his playing then settles into a largely sympathetic performance.

This is a cleverly produced record. Interspersing Spanish and English songs across the disc makes for a varied musical experience, while leaving for listeners who want to appreciate the Spanish repertoire more the opportunity to explore its highlights; even compare these with the English songs.

After her first release for EMI: “Sola Contigo” (Alone with You), and her two subsequent releases for Universal Jazz Spain: “Como Agua entre los Dedos” (Like Water Between the Fingers), and “El Mar de mi Vida” (The Sea of My Life), Eva Cortés ranks among the young and most interesting composers and performers of the jazz scene in Spanish. Then came “Back 2 The Source”, which is Eva’s personal look at the essence of what she considers to be the mainstay of her musical influence: Jazz. Read more…