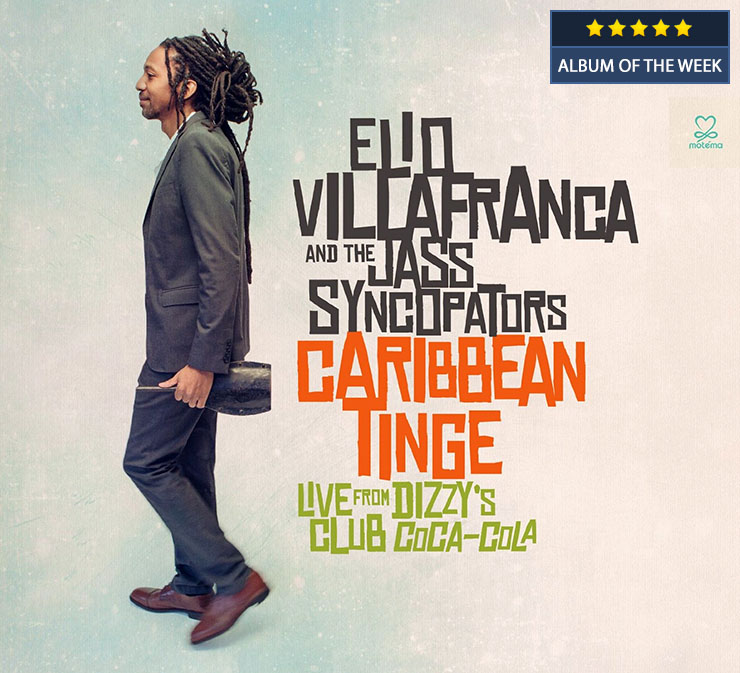 TP: I attended the performance at Dizzy’s (Jazz at Lincoln Center, New York). You viewed it via live-stream in Toronto, Canada. How was it on your end?

DN: Technically, the sound was great. Visually, a single camera was used, as opposed to the Nuevo Jazz Latino webcast, where several cameras were used. During the first set the lighting was a bit dark, probably because the backdrop is the New York City skyline and it was still daylight. The lighting for the second set was much better.

If you’ve never been to Dizzy’s, it has been described as “the best jazz room in the city.” The acoustics are superb and it offers a panoramic view of the New York City skyline. On the evening I attended the music and the vibe could not have been better.

About the band: The Jazz Syncopators are loosely based on Duke Ellington’s Serenaders AKA “the colored syncopators.” According to Elio, “Syncopation was such a big part of this music, jazz, and such a big part of Cuban music.” With that concept in mind, Elio formed a new band with top-players from both genres.

The compositions, arrangements and musicianship were great. As a leader, Elio was in command. The band performed at its best, as a very tight unit.

The interaction between the band members was fantastic. Also, the addition of trombonist Steve Turre to the lineup couldn’t have been more appropriate. His solo on the conch shells was one of the highlights of the show. Another impressive moment of the concert for me was the intro to the song “Cofradias”, performed by percussionist Jonathan Troncoso. He played the balsie drum, which is a melodic drum used in the Dominican style of Palo. The balsie player alters the pitch of the drum by applying pressure with his foot. I found a similarity in sound with the Brazilian “cuica”. Simply fascinating.

Agreed. Coincidentally, I sat next to Steve’s son, drummer O’ Ryan Turre, who enjoyed the solo as much as I did.

I also would like to mention the dialogue between the dancer, Julia Loiza Guiterrez-Rivera and the lead drummer (who played the barril called Primo or subidor). In Puerto Rican bomba, the drummer follows the dancer, who determines the rhythmic patterns with his/her moves. The intervention of Julia Loiza Guiterrez-Rivera (a magnificent dancer) was magical. It added a very special dimension to the whole performance indeed.

The dance element was a great touch. Julia is one of New York’s hottest Bomba and Plena dancers. She and Elio have performed with Los Pleneros de la 21, which I’m guessing, is where they connected. Another highlight (of the live performance) was Paula’s Blues, a tune that Elio composed for his mother. It was straight-up blues with a Latin tinge. I also liked the fact that Elio connected with the audience. It’s important that the audience “gets” what the artists are doing.

What are some of your favorite tunes on the recording?

Sunday Stomp At Congo Square takes me back in time to New Orleans and the gatherings of slaves at Congo Square, when they were allowed to sing and dance. The use of an Afro-Puerto Rican Bomba rhythm called Yubá as a rhythmic foundation for this track is majestic and hypnotizing.

I like Flower by the River. It’s ceremonial, solemn, almost like a funeral song. It has a very cinematic feel. At one point the ensemble sounds like a marching band. The tune slowly evolves into a captivating instrumental conversation.

I also like the composition, Tango for Two. It’s Elio’s first exploration into tango territory. According to several sources, milonga originated in the Rio de la Plata area of Argentina and Uruguay. It was quite popular in the 1870s and is considered the predecessor to tango. And talking about syncopation, an interesting fact: Milonga has a syncopated beat, consisting of 8 beats with accents on the 1st, (sometime also the 2nd) 4th, 5th and 7th beats.

Also, The Source in Between, it’s a great rendition of a previously released track and the title of Elio’s 2008 release. On that album, Elio explored a straight-ahead jazz format with a quartet. The tune was re-arranged to fit the sound developed with the Jass Syncopators.

My favorite tunes are the title track (Caribbean Tinge), which is the first tune Elio composed for the Jass Syncopators. Cofradias, which incorporates the Dominican rhythm Salve and speaks to the brotherhood between Caribbean music and jazz. Mambo Vivo, which is dedicated to the late, great Dámaso Pérez Prado.

To sum things up, the performance was top-notch and Caribbean Tinge is Elio’s most impressive effort to date. By the way, Elio is the recipient of Jazz at Lincoln Center’s first ever Millenium Swing Award. Congratulations to Elio and to JALC for having the good sense to make the concert available to the public.

Regarding the concert, I repeat what I said for Nuevo Jazz Latino, one of the most terrific webcasts I have watched: “If it’s true that nothing replaces the experience of attending a live music concert, I’m convinced the closest you can get to it is through a webcast, an online feed transmitting the action as it is happening (and it could be in any place in the world). JALC does a commendable service providing this free option to Jazz lovers, no matter where they are around the globe, as long as they have high-speed internet connection. The result is truly professional… provides a unique perspective of the performance, creating a remarkable experience for the online viewer”.

Regarding the recording, Elio Villafranca and the Jass Syncopators: Caribbean Tinge – Live from Dizzy’s Club Coca Cola, is already on my list of best recordings for 2014. It is uplifting, the music gets in your veins right from the first track. It makes you move and sparks an interest in history and everything Caribbean. Congratulations to Elio and his Jass Syncopators for a wonderful album.

Elio Villafranca (piano): He is at the forefront of the latest generation of remarkable Cuban pianists, composers and bandleaders that for several years has been making major creative contributions to the international development of modern jazz. Born in the Pinar del Río province of Western Cuba, Villafranca was classically trained in percussion and composition at the Instituto Superior de Arte in Havana, Cuba.

Gregg August (bass): Originally a drummer, while spending two years at SUNY Albany, studying percussion with Richard Albagli, Gregg learned the bass. He spans the jazz, Latin jazz, classical and avant-garde scenes. A sought-after composer and arranger, celebrated for his versatility, breadth and intelligence, Gregg has been an active member of the New York music scene for over ten years.

Willie Jones III (drums): Born in Los Angeles, California on June 8, 1968, Jones’ earliest exposure to music was through his father, Willie Jones II, an accomplished and notable jazz pianist, who offered guidance and inspiration to his gifted son. Jones completed his academic training after receiving a full scholarship to the California Institute of the Arts where he studied under the tutelage of the legendary Albert “Tootie” Heath.

Lewis Nash (drums): Born in Phoenix, Arizona, Lewis developed an early interest in music and began playing drums at age 10. By age 18, he was performing with local jazz groups. By the time he was 21, Nash had become the “first call” jazz drummer in Phoenix, working with Sonny Stitt, Art Pepper, Red Garland, Lee Konitz, Barney Kessell and Slide Hampton during their engagements in the city.

Sean Jones (trumpet): He is an American trumpeter and composer featured on the 2007 Grammy Award-winning Turned to Blue from Nancy Wilson. As a bandleader, Jones has released five albums under the Mack Avenue Records label. He performs with his own groups both nationally and internationally, in addition to being a lead trumpeter for the Jazz at Lincoln Center Orchestra.

Vincent Herring (alto saxophone): Vincent is a saxophone virtuoso with a uniquely intense and vigorous musical voice. He is considered one of the premier saxophonists of his generation, a guest soloist with Wynton Marsalis at Lincoln Center and John Faddis with the Carnegie Hall Big Band. Vincent is currently on the faculty of William Patterson University and conducts master classes and jazz workshops at conservatories and universities around the world.

Greg Tardy (tenor saxophone): Born into a musical family, Gregory Tardy began his musical career studying classical clarinet. While studying with renowned clarinetists Russell Dagon and Jack Snavely, Tardy began preparing for a symphony career. Although he never practiced the saxophone seriously, Tardy began getting calls to play local funk gigs in the Milwaukee area. At the prodding of his older brother, Tardy finally explored the music of John Coltrane, and determined to be a jazz musician.

Anthony Carrillo (barril/congas): Anthony Carrillo hails from Puerto Rico. He developed his reputation in the ’80s with Batacumbele, an Afro-Caribbean outfit that helped pave the way for his work on Paul Simon’s “Rhythm of the Saints” disc. A regular sideman with master Eddie Palmieri, Carrillo has proven his proficiency on such instruments as the batá, shekere, , barril, conga and bongos.

Jonathan Troncoso (balsie drum/bongos): Jonathan “JBlak” Troncoso, was born into a family of musicians in Dominican Republic, in 1982. Jonathan was inspired to be a musician at an early age by his father, Domingo Troncoso, a percussionist. At the age of five, he picked up his first instrument, “la tambora”, and amazed his family and neighbors. Shortly thereafter, Jonathan began playing guira and later, bongo. Versed early on in playing percussion for popular music Jonathan began playing professionally as his father’s young protégé. His musical life changed and interests shifted when Jonathan moved to New York City in 1992, at the age of 10.

Watch a performance of Elio Villafranca and The Jass Syncopators at Dizzy’s in 2013: