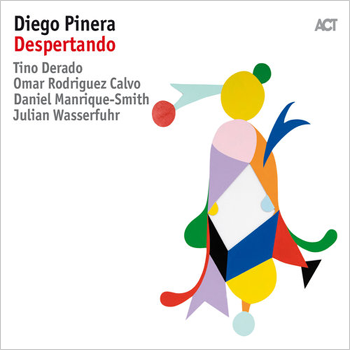 In his remarkable 2018 album, Despertando the drummer Diego Pinera has shifted his sights slightly to more tradition-based repertoire. However, it is impossible to keep the forward-thinking drummer rooted in the sentimentality of the past; certainly not in any substantive way as this recording proves. Mr Pinera is – and has always been – one of the most audacious percussion colourists in music. He draws from a deep and wide palette of colours, mixing not only metre, but, as we hear on Despertando rhythmic textures as well. This he does by occasionally stepping away from the conventional drumset to make wonderful music on various large and small percussion instruments including, here, the resonant steel drum as well.

Significantly, of course, Diego Pinera shows himself, yet again, to be a musician first and foremost and even as he leads his ensemble into each piece of music with the clicking of his drum-sticks to count off the initial beats of a song, it is really but an invitation to launch into the melody. And so with the greatest of melodic sense the drummer moulds each song. Make no mistake Mr Pinera helms his musical ship from the vantage point of rhythm and while it may be easy to unravel South American music in all its Afro-Caribbean rhythmic glory few drummers – their worldwide fame notwithstanding – can drum with the same facility as Diego Pinera. The reason is simply this: no one drumming today seems to have ability to create such complex innovations.

As a musician-drummer Diego Pinera long ago invented a style that melded the spectacular but strict rhythmic forms of his native Uruguay – the candombe, milonga and murga – into the broader and infinitely looser syncopations of Jazz drumming. The accents of those complex Afro-Uruguayan forms – in Mr Pinera’s hands – have become organically interwoven into the exquisite jazzy inventions that are entirely of his (Mr Pinera’s) making. Two spectacular examples of this are Duke Ellington and Juan Tizol’s “Caravan” and Sonny Rollins’ iconic piece, “St. Thomas”. The invention doesn’t stop there. Listening to how Diego Pinera turns the Cuban standard, Ernesto Lecuona’s “La Comparsa” into something entirely and beautifully new is a treat for the ear as is his extraordinary take on the great Cuban Bola de Nieve’s lullaby, “Drume Negrita” (wrongly or purposely spelled on the album package as “Duerme Negrito”).

Diego Pinera is joined on this album by a truly fine group of musicians and the almost stark beauty of his drumming is enriched considerably especially by some elegant playing by Daniel Manrique-Smith’s flutes and Julian Wasserfuhr’s horns. The two musicians, egged on by evocative harmonising from Tino Derado’s piano and the glorious rumble of Omar Rodriguez’s bass, contribute enormously to the melodic, harmonic and rhythmic splendour of this album.