The Afro-Cuban music of David Virelles’ 2015 ECM disc, Mbókò is not so much a form as it is layer upon layer of tone colours and textures assembled into a recital that is spread as if on a quintessential, ethereal canvas by one of the most promising pianists of this generation. David Virelles has proved time and time again that his is a reputation as a provocative, yet immensely thoughtful programme builder. It’s hard to think of this disc as anything but his pièce de résistance. True this is only Mr. Virelles’ third album as leader, but his immense talent seems to fructify in the rigorous musical structures of disc, which is annunciated by a flexible and deeply internalized approach to rhythm and spacing, not to mention multi-hued sonority. 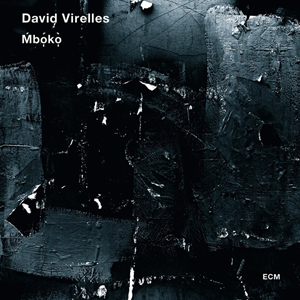 The style could be called Afro-Cuban, but there is something of a melding of that idiom into the natural improvisation extracted from jazz. And yet the harmonic language is largely tonal, with the occasional presence of pungency as lines layer and criss-cross. This is after all the music of the spirit – ‘sacred music’ as Mr. Virelles calls it. Yes, it draws from Santeria and Abakuá the Afri-Christian rites practiced traditionally and this is exemplified by the magnificent call and response between David Virelles and that griot of Afro-Cuban tradition, Román Díaz. Here things get more tricky and delightful. David Virelles has also chosen two basses to lead the unfolding of the music. Thus he has attempted to create a molten mix in his harmonic-rhythmic language, while his guidance of the melodic lines, if you can at all call them that, tends towards a serious, brooding lyricism.

All of these qualities reveal themselves in how freely yet naturally and logically the sacred music unfolds along with the leisurely and well spun-out into lively dance-like relationships between the music and its intent that gels into poetry and music. Forms dissolve and sketches arise as the musical painting becomes more vivid towards the middle of the music – roughly equivalent to the acceleration of the rituals, where dancing becomes more frenetic. This seemingly chaotic part of the ritual is revealed in dissonant passages stabbed by bass-line melodies from Robert Hurst and Thomas Morgan that collide with the piano-lines of David Virelles, all of which is glued together by Marcus Gilmore’s chattering drums and the incessant thunder of Román Díaz’s hand drum. The high spirits of the music seems into the mind’s ear here and torrid emotions may be savoured as a kind of sinuous melody builds up in intensity of rhythmic zest.

The pleasures of this music can be attributed as much to David Virelles’ writing and arranging as well as the contributions made to his music by those who play it for him – Román Díaz and Marcus Gilmore and the magnificent playing of the two bassists, Thomas Morgan and Robert Hurst. This is where the wondrous mix of the piano and the other instruments reaches a rarified realm as the crack ensemble that play with the depth of sonority and rhythmic gusto that this music demands. Listen to Highest One to know what I mean. Happily all of this is captured by the excellent engineers at the ECM studios in München.