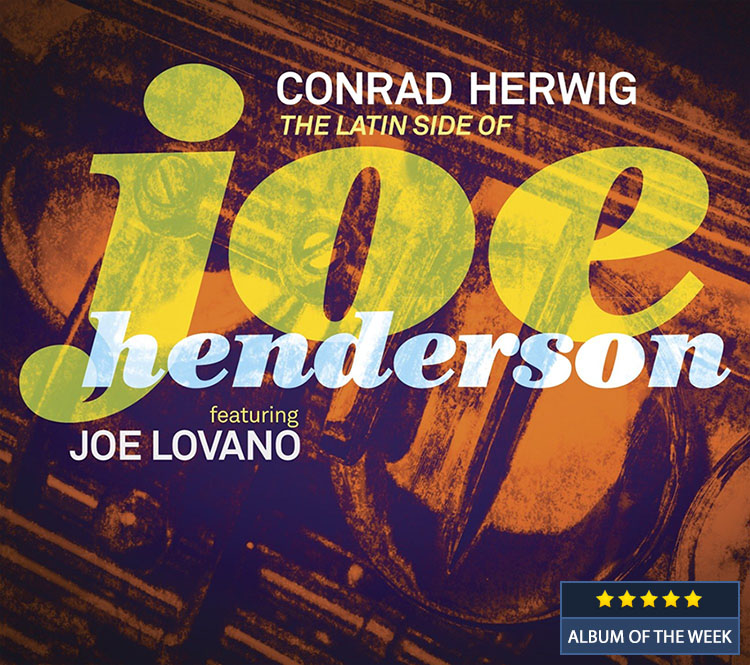 The most interesting challenge in reinventing music that has already been invented in a particular idiom is not necessarily melodic. In fact it is almost certainly rhythmic. This is especially true if the idiom happens to be Latin. How to change up the time and the pulse of the material without necessarily complicating it, but actually making it simpler? How to make the rhythm more interesting without making it impossible to count? How to add musical instruments to the overall mix and inspiring these musicians to bring their own special rhythmic idiosyncrasies to the mix? Conrad Herwig has been doing this and more in his series of Latin Side… albums and this one, The Latin Side of Joe Henderson may be the most interesting, the most challenging and the most accomplished yet. The tenor saxophonist, one of the most highly skilled and versatile in jazz was a passionate lover of rhythms Latin and wrote some of the most famous charts, including “Recorda Me” and “Black Narcissus,” tunes which came to be among the most recorded tunes in this music as well. The trombonist Conrad Herwig, for his part, has begun by developing a deep appreciation of Mr. Henderson’s Afro-Latin sensibility and then not just translating it, but transmogrifying it into music of his own invention.

One clever aspect of the new versions of the charts is that they have been ever so slightly slowed down. So imperceptible is this change that it is almost elusive and discernible only after a few hearings. Some might find this a disadvantage, but those might be jumping to conclusions just a little bit too early in the proceedings. Listen instead with an open mind to the very first chart on the album: “Recorda Me” and the very first solo on the tune comes not from Mr. Herwig, but the great baritone saxophonist, Ronnie Cuber. The saxophonist, a master of all things Latin dives head-first into his solo. He plays from deep inside his soul, one so formless and bottomless that Mr. Cuber is able to come up with not only lungs full of air, but also a palette of colours so varied and such a treat for the sensibilities that herein lies the key to enjoying this fabulous tune. Mr. Cuber’s playing as well as Mr. Herwig’s is absolutely mystical. Another magical composition by Joe Henderson is “Afro-Centric,” perhaps one of his most experimental as well. The quicksilver changes and the jumping rhythmic changes are manifest in the choruses that unfold like giant waves smashing on a pristine beach. The chart immediately following is “Black Narcissus,” another important and spectacular tune from the men of Mr. Henderson. The full-blooded romanticism of this rhythm skips and dances ahead of and behind certain intervals and its seemingly interminable forward motion is like hopscotch. “Blue Bossa,” is beautifully re-invented with such mastery that it sounds now familiar and now completely new and imaginative with its jumping rhythmic changes in line after line, which segues into a fine solo by Mr. Cuber. And this magical change up only represents some of the almost obsessive changes on the album. The beauty of it all is that the music is always danceable in a gentle or vigorous manner depending on how energetic the listener feels.

Finally the mix of instruments is fascinating. Two saxophones that easily hop from the bottom registers of those winds to the top manned by Ronnie Cuber and on tenor by the masterful Joe Lovano. And then there is the trumpeter Alex Sipiagin, whose magical timbre is spread like a blessing all over the music. There must also be mention of Bill O’Connell, whose ingenious playing is almost something to take for granted, because he is such a master on the big keyboard. However his touch is magical and he almost seals the chow from under the horns. There is also the percussionists who add exquisite colour to the constantly changing music. But the lions’ share of the kudos must go to Conrad Herwig, for beauty that is sometimes so imperceptible it could be missed altogether. Fortunately his genius is all over the album and therefore this could be forgiven. Well, almost…

New York-based jazz trombonist Conrad Herwig is considered one of the world’s complete jazz musicians, atop both the performing and jazz educational fields with an abundance of composer and arranger credits, as well. To date, he has released 20 recordings as a leader in addition to contributing to nearly 200 other recording sessions with some of the most notable artists in jazz. He has performed and recorded with Miles Davis, Joe Henderson, Eddie Palmieri, Tito Puente, Frank Sinatra, Joe Lovano and Tom Harrell, among many others… Read more…