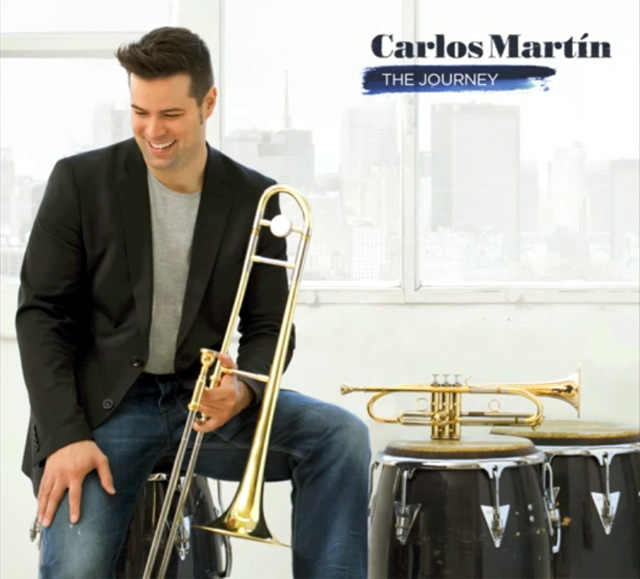 There is a visceral ecstasy that runs through the music of The Journey, a veritable musical odyssey by the trombonist, occasional trumpeter and magnificent conguero, Carlos Martín. This is duende of a different kind, largely due to the fact that the music does not spring from the depths of an old soul in the throes of sadness and joy. But rather here is an Odysseus, cut from the old superhero, inhabiting a modern skin, made up like a magical patchwork quilt, of a myriad pictures and narratives grafted from days of yore and ancient times remembered even today. And if Carlos Martín wears this technicolour dream coat like a magical new skin, he displays its wonders proudly in the brazen playing of his trombone, the wild adventures on the cajón and the congas and the mighty, lonesome wail of his trumpet in “Interlude II: El Barrio,” which precedes a mighty sojourn on the congas on “Santa Cruz”.

There might seem, at times, that the dramatis personae on this record is an ensemble cast, what with the stellar musicians navigating the journey, but this is simply a matter of Carlos Martín giving his cast of musicians so much room to express themselves that the record may be remembered by the soli and not the music as a holistic piece. And then there is that chameleon-like quality of the protagonist, heard sometimes on the cajón, sometimes on the congas, once on the trumpet, on incidental percussion… and then there is that towering personality as a trombonist. Here he is an absolute virtuoso, turning his instrument as close to the human voice as a trombone can possibly get—just as the great Roswell Rudd does—uttering groans and squishing notes so they sound like vocalastic smears; while also playing in the most melodic “straight ahead” modal manner. At least once, though, Carlos Martín does the near impossible: he plays several harmonic overtones with such mastery that he can lay claim to being the only other trombonist—other than that German Maestro, Albert Mangelsdorff—who can play three or more harmonic overtones at once, creating a magical palette of colours through the several lines where this lasts. In a careful listen to “Interlude IV: El Guardián De Gotham” Mr. Martín makes this magical playing a reality.

Lest it seem that the music is composed merely of incidental Interludes, Mr. Martín has indeed composed several swashbuckling pieces and one that reaches the pinnacles of spiritual ecstasy: “Camino A La Soleá”. So magnificent and vivid is the trumpet playing on this piece that the Virgin Mary’s tears can be actually tasted and the in proverbial sword piercing her heart there is the hiss and throb of her pain… all in the sharp and glorious melancholia of Mr. Martín’s trumpet. Of course, the trumpet would have struck a quite lonely tune had it not been for the soaring beauty of Alba Carmona’s spirited chant. The song processes slowly, prolonging the Biblical agony of the Virgin Mary, but eventually ends in her glorious and super-human triumph over the mighty pain in her soul. All this is manifest in the sublime chart led by a brilliant Flamenco chant, the pulsating bass lines of Javier Colina and Carlos Martín’s glorious trumpet.

The opening song “La Perla” (a reference to the historical community located outside the walls of Old San Juan in Puerto Rico), is a high-spirited composition featuring percussionist Paoli Mejías on traditional barriles de bomba. In a classic doffing of the hat to his inspiration from Bebop, Carlos Martín commits himself to fashioning a beautiful homage to the Bebop masters in “Vuelvo A Valencia”, a magnificent composition by saxophonist Perico Sambeat, who joins Mr. Martín on two tracks. This racy chart winds the tension in the record to such a degree that the listener could well be left gasping for breath. Equally breathtaking is the playing throughout the record of pianist Luis Perdomo, who seems to embody the music as if it were indeed written for him, alone. But there is more. The wizardry of the drummer, Henry Cole signals that this master colourist is certainly one of the most important drummers playing today, who like Peter Erskine, can play in virtually any idiom. Throughout the record Mr. Cole creates an amorphous pulse around the music that is constantly shifting and yet he maintains a linear melodic line that seems to be a tributary of the gushing river of the song itself. And then there is Luques Curtis, who not only anchors the rhythm section, but also roams all over it like a mediaeval apothecary creating almost mystical bass lines throughout the songs. In this regard he is one of several musical magicians to grace this wonderful, unforgettable record by a rising star from Spain: Carlos Martín.

You can hear in the air the voice of a trombone, the heartbeat of percussion, together with the gentleness and audacity of a trumpet. But you will see just one man. On stage is Carlos Martín who’s rhythms and brass looks for self expression through his fusion of musical disciplines: The mind on the freedom of jazz language and two hands which feel and connect Latin and flamenco nature. Read more…