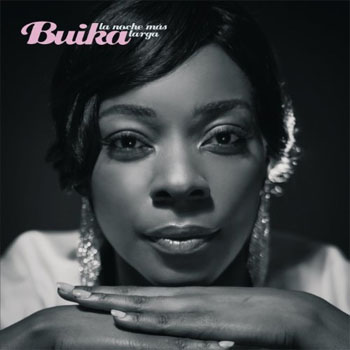 There is an aspect of vocalastics in a rarified realm that when attained by the singer, replaces earthly country and heritage with the whole of the cosmos. Vocalists such as Billie Holiday, Abbey Lincoln, and more recently, Lucía Pulido have attained that status. And now, Buika, as well… Singing in a flamenco idiom, conjuring up the perfect polyrhythmic storm of Africa, of this part of the world and that dissolves into the expression of a force so elementally ethereal and other worldly that the emotional or narrative outpouring might as well as come from the fifth dimension, or the spiritual world, or the heavens of the cosmos, which is where the spirit of Buika seems to dwell. The husky mesmerism of her enunciation; the depth-defying, soulful emotion makes for singing and the manifestation of Federico Garcia Lorca’s definition of “duende” to a degree unheard of since that poet roamed the earth from Granada to New York. In Buika, music becomes a power, not a work; a struggle, not a thought; her duende comes not from her throat, but from the soles of her feet; it is a question not of ability, but of true living style, of blood, of the most ancient culture; of spontaneous style. This is the essence of her dramatically beautiful album, La noche más larga

Ms. Buika’s music becomes not a story of eternal struggle; but of its storm surge. She embodies the lines as characters wrestling with the age-old issues of bravado and machismo and its eternal lovers’ quarrel frailty and femininity. Her voice soars higher than a condor; dives deeper than Challenger Deep, where no suns shine. Her lines, like sharpened musical arrows pierce the vibrant flesh of the heart making its blood spill relentlessly; and take control of and dilate the mind’s eye so that the intensity of passion is heightened and becomes almost unendurable. Ms. Buika is thus the quintessential flamenco artist; one whose performances are like corkscrews that get her art into the very sensibilities of her audiences and what defines the music of La noche más larga. Ms. Buika’s voice is beautifully lissom, while it is husky and sensual. Hers a is a contralto, which is also flexible so that she is able to hit unbelievably high notes, thus creating the feelings of hapless melancholia as well as unfettered joy. Her musical magic is so completely captivating that it is impossible to resist falling in love with her—whether she is melancholic or joyful. The manner in which she recasts the emotion of the classic chart made famous by the Mexican balladeer, José José “La nave del olvido” is truly heart-breaking. Her words, those piercing arrows, have new and naked meaning when she sings “There are still Springs within my hands/to pamper you with brand new caresses/that would die in my hands if you were to go away…” and “I wouldn’t comprehend my tomorrow if you were to go away/And even if you were just pretending to love me, I’d gladly accept it/Even if you didn’t love me I would adore you all the same…/Wait for a little while…”

Again, the impossible leaps that Ms. Buika makes in “Sueño con ella” are unparalleled. The fact that she sings the chart at a rather fast swaggering tempo suggests that she will not waste time on being cast down by sadness. The dramaturgy of her songs is uplifting, therefore. Ms. Buika sees the “Más allá del infinito azul” and she is a woman who sees life as exceedingly elevating. In another instance, on “Siboney” she sees through melancholia of the character’s existence and transforms the echoes of grinding toil into something that ultimately brings acceptance and contentment in the vaunting rhythm of the piece. But then comes her masterpiece, “La noche más larga,” which is sung with the proverbial twist in her guts, or to use the metaphor of duende mentioned earlier, it is like that corkscrew that is taken to the heart of the artist. The music is, in the end, as cathartic as the Grecian tragedy “Medea” is. The undulating piano and the growl ululations of the bass guitar heighten the sense of agony and loneliness of the longest night. Finally there is Ms. Buika’s interpretation of classic songs. Her flamenco treatment of “Don’t Explain” gets the full magical treatment and is one of the best charts on the recording as is the re-imagination of Abbey Lincoln’s “Throw it Away”.

It bears mention that Ms. Buika has the support of a fabulous ensemble—from her regular pianist, Iván “Melón” Lewis and her regular percussionist, Ramón Porrina to the electric bassist Alain Pérez and the acoustic bassist, John Benítez, as well as percussionist Pedrito Martínez who plays everything from congas to batás and creates a remarkable ambience throughout, together with the Spanish percussionist, Israel Suárez “El Piraña”. And finally there are the flamenco guitarists, Juan José Suárez and Carlos De Motril as well as the ethereal background vocalists—all of whom contribute to this fine production. But the night belongs to Ms. Buika and the entrancing black magic of her vocalastics and the breathtaking duende of her music.