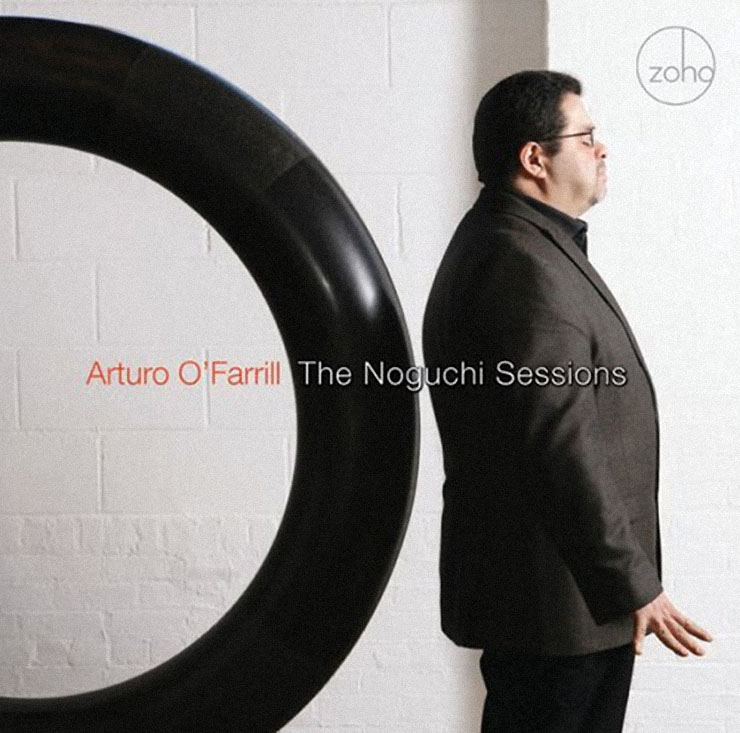 To be alone at the keyboard of a great piano in a sound-proofed studio is a daunting prospect for the ideation process. How much more daunting, therefore, must it be to be alone in a room with the awesome art of Japanese- American sculptor, Isamu Noguchi, for the streaming of musical ideas to work in confluence or otherwise, with that artist’s monumental work? On the evidence of this fine record, The Noguchi Sessions awe for the sculptor’s work might have actually gone into the creation and rendering of 12 equally monumental pieces on one of the finest-sounding Steinway pianos in a long time. In fact this might hark back to the days when Canadian genius Glenn Gould played on one in New York, in his halcyon days as a performer, before his health started to crumble. But back to The Noguchi Sessions and its splendid creator and performer, Arturo O’Farrill: A piano master like few others, O’Farrill is born to musical gentry, being the son of the great composer, arranger and conductor of the mighty Afro-Cuban Jazz Orchestra, Chico O’Farrill, the younger O’Farrill cut his teeth under his father’s tutelage, then with Carla Bley, before returning to lead his father’s big band after Chico O’Farrill passed away.

With the Afro-Cuban Jazz Orchestra, Arturo O’Farrill rarely took soli. When he did they were beautiful, pertinent and short. The ensemble was always a priority. However in The Noguchi Sessions his brief was altered drastically. Here he was to be the center of it all, sharing the spotlight only with the inspirational sculptures. And it is here that his own ingenuity takes over and his utter greatness shines amid the pomp and circumstance of a museum with equally celebrated work. O’Farrill experiences a torrent of brilliant ideas that are almost unstoppable. Although he plays twelve distinct charts, it is almost as if he has created a virtually endless stream of music; a whole network of musical tributaries that tumble and charge with forces of their own finally colliding into one great river of sound charging down to New Orleans where Jelly Roll Morton once made history as pianist of great repute making the music of the future: that which he called “jazz”.

O’Farrill is at his expressive best when he leans heavily on the damper, allowing his notes and end-lines to echo haunting the mind as they occupy its innermost recesses, there to die with gently quivering vibrato. In order to get there, however, O’Farrill digs deep into his soul, wrenching notes which he commands to flow in endless lines that loop and spring with great joy and magical geometry from one harmonic plane to another. O’Farrill demonstrates that he has a voice of singular beauty that stirs out of the recesses of his heart. This gives his music a primordial rhythm that mimics the incessant heartbeat of this unassuming genius. O’Farrill uses ingenious dynamics and is a master of the use of the pedals; this enhances his readiness to crown his musical ideas with glorious resonance. Occasionally the pianist seems reticent and might poke at notes, but this is only to emphasise an idea, like the clarion call of the vendor in Ernesto Lecouna’s “Siboney”. That probing, searching stab at the note in a particular rhythmic mode also helps underscore the essence of a long idea: for instance in his dramatic flourishes and runs in Randy Weston’s epic score called “Little Niles”. The dramaturgy of Stephen Foster’s 19th Century classic, “O’ Susanna” holds its own magnificence: Darting runs up and down the middle and upper registers of the piano, broken only by stellar arpeggios that provide a welcome break from the aching emotion of the song.

But Arturo O’Farrill reserves perhaps some of his most vivid musical ideas and flourishing musical language for the six compositions. Here can be experienced a committed artist who is acutely socio-politically aware of the world around him. His music sounds like the anthems that bassist Charlie Haden, and even before him, the great Charles Mingus, were noted for. It might be no secret that “In Whom,” “The Delusion Of The Greedy” and “Once I Had A Secret Meditation” are fraught with meaning in their titles alone; and so much more in the elasticity of their music. Although O’Farrill is no car-carrying member ascribing to Marxist-Leninist ideals he is a car-carrying humanist, whose brief is a better world without the oppressive control of capitalism. However, he does not preach, but throughout this most unforgettable record, O’Farrill extolls the virtues of love for live in an unabashedly beautiful manner.

Tracks: The Sun At Midnight; O’ Susanna; In Whom; Little Niles; The Delusion of the Greedy; Siboney; Alisonia; Once I Had A Secret Meditation; Mi Vida; Obsesión; Oh Danny Boy; Jelly Roll.