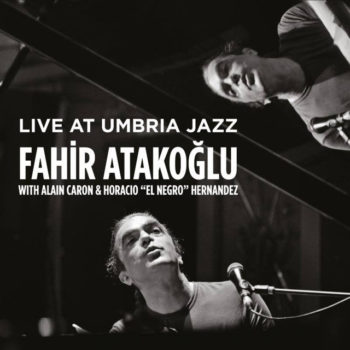 Fahir Atakoglu is no stranger to the festival circuit and it is on one of these performances that this recording was made. Technology has been expertly used here and the Teatro Morlacchi in Umbria provides the warmth and dryness for this crisp recording, typified not only by the voluptuous sound of the Fizoli concert grand piano that Atakoglu plays but also of the chiselled sound of bass and the sharp sound of Horacio ‘El Negro’ Hernández’s drums. Fahir Atakoglu must have also warmed to the atmosphere of the auditorium and so, it seems did the audience – remarkably quiet for an event such as this – so much so that the performance surges from peak to peak for just over an hour.

Atakoglu plays all original compositions some of which date back to his 2008 quintet album. The delicious ululations create the setting of a Middle Eastern souq resplendent in riot of colour with echoes of vending cries in the vocal parts sung by the pianist. His playing though is neither finicky nor a dryly literal playback of the atmospheric score of the marketplace in song, but using both types of evidence as a springboard for an original and convincing approach. ‘Faces’ is a case in point, for Fahir Atakoglu’s conception of building the texture essentially sidesteps most of his contemporaries’ and sallies forth into a realm informed by the broad influence of Moorish and Gypsy cultural predilections, his melding of the two like some exotic spice from a Grand Bazaar.

Fluent, multi-faceted and tonally-sensitive Fahir Atakoglu is a technician of exceptional elegance and sophistication. Part of that sophistication is his refusal to dazzle. Technique is at all times put to strictly musical ends. ‘Taste and feeling’ are of paramount importance and his piano playing flows like fragrant oil. The playing is also informed by exceedingly melodic inflection and is curvaceous, natural and discreetly sensuous; the tonal palette is unfailingly refined and the pervasive polyphony of the music’s textures is eminently clear but never ostentatious.

Through it all Fahir Atakoglu emerges as a ‘big’ pianist. But so also do bassist Alain Caron and drummer Horacio ‘El Negro’ Hernández. Caron is a sublime player who resides in a rarefied realm of bassists. His bass guitar and amplifiers beam his signature sound across the expectant atmosphere in the auditorium. ‘El Negro’ Hernández’s rattle and hum of the drums – an enormous set of tuned instruments and a bevy of cymbals are elaborately played with characteristic pomp and circumstance. This entire package of accompaniment provides considerable encouragement for the pianist enabling him to push the envelope even further than he might have on any other occasion. Add to that the superbly captured sound and you have a truly unforgettable experience on record to enjoy again, and again.