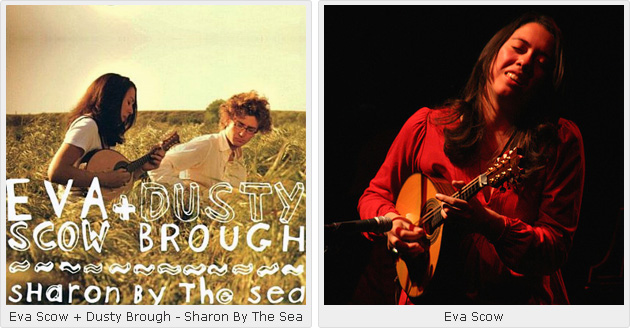 There is something in the music of Eva Scow that is so unique that the only two other musicians who come to mind when she is playing are Joni Mitchell and perhaps Bela Fleck. And here is why: As a composer and arranger, she hears music in the same playful, unvarnished and guileless manner that Joni Mitchell does. Yet like Mitchell, she is a sublime harmonic colorist and has a lyrical sophistication – whether in her phrasing and musical syntax, or the hidden rhythms (rhymes in Mitchell’s case) – that literally gives new meaning to the term. And of course, she is a virtuoso who can soar conceptually on a rather difficult instrument as only Bela Fleck can.

Sharon By The Sea will be one of the years’ most celebrated releases, for sure. On this record, Scow shares the marquee with guitarist Dusty Brough. What an inspired duo. True this record is choro, but it is the reading of the moods and the swirling emotions that emerge from great choro that haunts each song here. And there is such a delightful and memorable sense of playfulness that only Hermeto Pascoal brought time and time again to music.

First off, there are the titles of the songs themselves… these provide a contrapuntal elegance to the depth and richness of the music itself. The songs are quite naked because the emotion that runs like an underground river throughout each song is replete with elemental sadness in sketches, “Rodolfo,” “Sharon By The Sea” and best of all on “Sketches of Terry”. The harmonies are slanted, oblique and Monkish. “Sketches of Terry,” is especially novel with the addition of the tabla to the conventional choro percussion. This is a bold step. It broadens the textural palate of choro immediately with the deep melodic resonance – not quite like a surdo, which perhaps is a good thing – and makes it even more universal. Brasil sharing, once again, with the world…

And on the final track there is, again a stroke of genius – the addition of the Fender Rhodes, not because an electronic keyboard was absolutely necessary, but because the fey tones of the Rhodes would add a certain emotional vulnerability to the character’s emotions. Also the exquisite bass solo that comes out of nowhere to dazzle while a lazy dialogue in the background sets up the fade away… an end to a perfect weekend session… This is what makes this a record of considerable achievement.

And that recalls what Machito is known to have said apropos of clave. It is the emotion that makes the rhythm authentic, not necessarily the actual clacking of the clave.

Eva Scow on the web: www.myspace.com/evascow