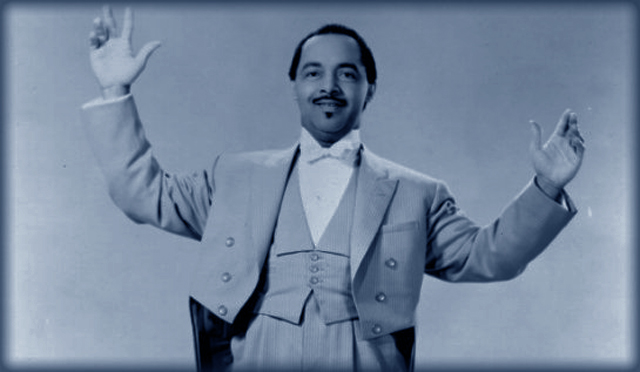 Who knew that Dámaso Pérez Prado, the “Mambo King”, director of Sonora Matancera between 1936 and 1939, long before he formed his iconic mambo groups could have so much poetry in him that he would compose two tone poems in his career? It was not until the 1954 recording of this masterpiece, Voodoo Suite that his unique artistry in this regard came to be known. In fact, the term suite is perhaps a misnomer given, no doubt, to the music by some less than worldly wise executive at the record label. The piece of music is more like a tone poem. Listening to this startling work, I am struck by the drama of the piece. The instrumentation employed speaks to the monumental nature of it. Pérez Prado delves into the heart of Afro-Caribbean music here as two drummers and eight percussionists cut loose in the opening bars as if heralding the entry of Voodoo priests who then prepare the faithful for the volcanic intensity of the prayer service.

With a stroke of genius, Pérez Prado has imagined the call of the Orishas with voice and chorus whose ascendant supplications are sent up with fourteen brass (nine trumpets, four trombones and a French horn), eight woodwinds and two basses. The heat from the visceral energy is palpable; it sets the stage for the dance movement that turns the Afro-Caribbean into an explosive dance. This marvelous sequence seems to replace the sonorous echo of drums with a vivacious improvised movement, as if in response to prayers being heard. The “thanksgiving” recessional comes after a dramatic cadenza created by serpentine lines played by the saxophones. Voices weave in and out of the horns as the music comes to a close in the brilliant retreat of the Orishas seemingly in chariots of fire, urged on by the voices (of the faithful). This is not merely Afro-Caribbean idioms on a collision course with jazz ones. This is music written in extraordinary compound metres that suggest voodoo ceremonies and New Orleans struts and the African origin of musical divination colliding with the music of the Americas. Pérez Prado reinvents himself in the persona of the great tone poet of Late European classicism: Jean Sibelius.

This seminal album also features six extraordinary arrangements of familiar big band charts: “St. James Infirmary”, “In The Mood”, the magnificent Vernon Duke standard, “I Can’t Get Started”, Count Basie’s masterpiece, “Jumping At The Woodside”, Benny Goodman’s “Stompin’ At The Savoy” and Harry James’ “Music Makers”. Each of the charts is re-written in the Afro-Caribbean metaphor. The mesmerising arrangements will leave the listener breathless; such is the beauty of the pieces. This is a masterly collaboration between Pérez Prado and the trumpeter Shorty Rogers. Pérez Prado went on to write a bookend to Voodoo Suite which was entitled The Exotic Suite of the Americas, recorded in 1962 and this later tone poem was also released on RCA/Victor. Pérez Prado continued to write popular music and was active until the late 70’s and early 80’s. But he never scored something as complex as these two extraordinary works.

Track List: Voodoo Suite; St. James Infirmary; In The Mood; I Can’t Get Started; Jumping At The Woodside; Stompin’ At The Savoy; Music Makers.

Dámaso Pérez Prado (December 11, 1916 – September 14, 1989) was a Cuban bandleader, musician (singer, organist and pianist), and composer who also appeared briefly in films. He is often referred to as the King of the Mambo. Pérez was his surname, thus Dámaso Pérez was his true name. However, he became known and professionally billed by as Pérez Prado, his paternal and maternal surnames respectively. His orchestra was the most popular in mambo. His son, Pérez Prado, Jr., continues to direct the Pérez Prado Orchestra in Mexico City to this day. Read more…