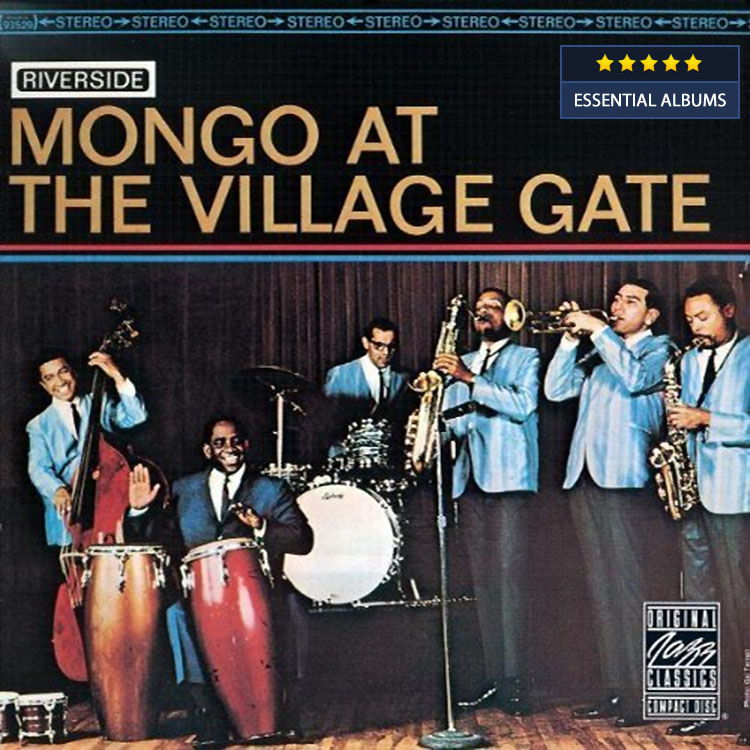 Mongo Santamaria, more than any other Cuban percussionist, has had a wider appeal across musical idioms and metaphors. His music comes from deep within his soul and is tinged with the blues, melded with the metaphor and imagery of jazz and when he drums, he opens up a portal with the ancient drummers of Africa, from where his ancestors came. His playing was so hot because he played with such fire that he could melt the ice in an igloo. His large palms sometimes caressed the skin on the conga heads and at other times he beat the living daylight out of them. But he always smiled, and when he played soft and gently, it felt as if he were making love to his congas. Mr. Santamaría was a proud rumbero, who developed his skills on the streets of Havana, but there were few men and fewer percussionists who exuded as much class as Ramón “Mongo” Santamaría Rodríguez. He moved to New York from when on a tour of Mexico in 1950 and, having played with Pérez Prado, Tito Puente, Cal Tjader and the Fania All-Stars, among other famous Afro-Latin ensembles, he proceeded to establish his own group. Mr. Santamaría was a gifted composer and he composed the almost mythical “Afro-blue” that was made famous by John Coltrane. But the percussionist was also a generous promoter of talent. He is known to have asked Herbie Hancock to premiere his composition at a nightclub in New York, when the audience was appearing to desert the club. But Orrin Keepnews heard the chart performed and is said to have “rushed” the group into the studio to record the chart, which became a huge hit on the Pop charts of the day.

When Mr. Santamaría plays and if the ear is tuned deep into his playing the authentic rumba of the streets where he cut his teeth and the dancing clave of son and guaguancó can be heard. His is the heartbeat of Havana, something that never left him, though he spent many years melding his congas with the idioms and progenitors of jazz. His “quinto” was distinctive and this came to him as if he were inspired on in a trance. He has said in interviews that he never knew where his sound came from. This echoes the belief of many a great musician—schooled or unschooled—who expressed the idea in many ways, that inspiration came from God; they were only channels of the rhythm, or melody… depending on what line they followed in the band. Musicians of African origin also learned their craft from paying homage to the Orishas or God-Fetishes that were carried with them to the New World and Mongo Santamaría was no exception. In this recording Mongo at The Village Gate Mr. Santamaría plays a programme that does not include his famous composition “Afro-blue” and neither does the programme include “Watermelon Man” but the music that was recorded from this incredible performance is every bit as exciting and revealing of a talent that had already blossomed for a decade and more. The music of “Creole,” “The Jungle Bit” and “Para Tí” are examples of great music and were it not for the radio play of “Afro-blue” by John Coltrane and “Watermelon Man” by Mongo Santamaría, music such as this would have been just as legendary. Mr. Santamaría’s great talent is also reflected in his glorious conga playing on “My Sound” a conga solo of great import.

Also excelling on this performance is Marty Sheller on trumpet and Pat Patrick on saxophones; the latter musician went on to become a member of Sun Ra’s Arkestra and stayed with the band for 40 years. This is not only a fine recording, but an essential one for anyone who loves Afro-Cuban, and indeed any kind of music.

Track List: Introduction by “Symphony” Sid; El Toro; Fatback; Mongo’s Groove; Creole; The Jungle Bit; My Sound; The Morning After; Nothing for Nothing; Para Tí

Ramón “Mongo” Santamaría Rodríguez (April 7, 1917, in Havana, Cuba – February 1, 2003, in Miami, Florida) was a rumba quinto master and an Afro-Cuban Latin jazz percussionist. He is most famous for being the composer of the jazz standard “Afro Blue,” recorded by John Coltrane among others. In 1950 he moved to New York where he played with Perez Prado, Tito Puente, Cal Tjader, Fania All Stars, etc. He was an integral figure in the fusion of Afro-Cuban rhythms with R&B and soul, paving the way for the boogaloo era of the late 1960s. His 1963 hit rendition of Herbie Hancock’s “Watermelon Man” was inducted into the Grammy Hall of Fame in 1998. Read more…