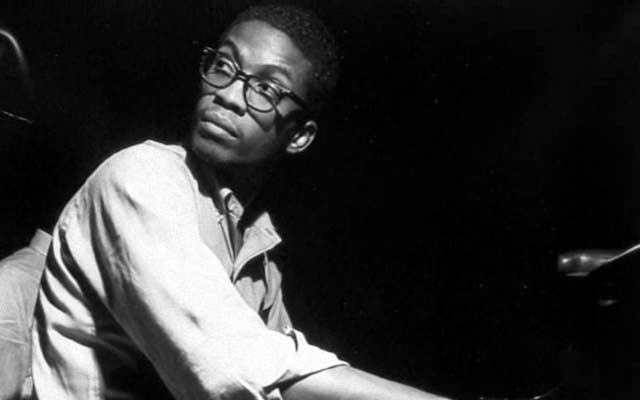 Herbie Hancock was just twenty-three when he recorded this Inventions & Dimensions. The music on the recording, and the fact that Mr. Hancock was laying down tracks for his third album speaks to the pianist’s deeply-felt urge to go beyond the boundaries of what must surely and vehemently have been called “Jazz”. But it was in a young pianist’s mind to blur boundaries, to reach deep into the heart of his Afri-American heritage and there to hear the heavenly rhythms of the Orishas in Afri-Cuban music; another blurred boundary here and certainly a portent for the future when he would record with Miles Davis and his own records over the years: The New Standard, Future Possibilities, River: The Joni Letters and The Imagine Project. But here, so young and so in touch with his soul and its inner yearnings Herbie Hancock proved that he had something that no one else had, save bassist Al McKibbon. 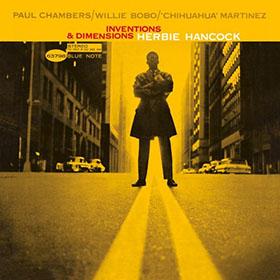 What does the term “Latin-Jazz” mean? It seems almost too dry and insufficient to describe this music. This constant weaving between the two worlds of Africa and the Americas and their islands has its own wonder, creating a sort of brocade of music that is too beguiling and hypnotic to resist. You find yourself falling prey to Willie Bobo’s breathtaking sense of time in a prototypical sense of African polyrhythms. Track names beguile too. “Succotash” is music to the epicurean as well as a call to dance, “Triangle” is a piece of music with swing and shuffle and constantly changing pulse. “Jack Rabbit” and “Jump Ahead” are no less captivating in rhythm and in melodic invention. And then there is “Mimosa” a heady piece of work polished, as the other pieces are, like gleaming gems. None of this would have been executed without Mr. Hancock’s assembly of a quartet who parley with the familiarity of old friends.

But before it all is Herbie Hancock, who along with his compatriot Wayne Shorter, has become arguably one of the most influential musicians in Jazz. No doubt his approach was shaped by Duke Ellington, who opened many a heart and mind, but you can already see here that Mr. Hancock is very much his own man, playing as if moulded as much by Chopin as he is by his early ancestors in Jazz. His cool spacey piano is less than conventional here and his human-voice-like glissandos and melismas in turn add a rich and not entirely predictable harmonic foundation. The surprises, when they come, are effective but discreet. And Mr. Hancock plays beautifully off Paul Chambers’ bass, with its dancing pizzicato and delicate curlicue of a bassline in “Mimosa”. That and the solo there has the leader meandering through the song, the rhythm section responding to Mr. Hancock’s swirling two hands with thrills and spills of their own.

Willie Bobo, named so by pianist Mary-Lou Williams, is a master whether he is playing a conventional drumset or the timbales, hot from his native Puerto Rico. His tart utterances add a whole world of tone colours to the music. Where the master wants a harder edge to the rhythm, he adds “Chihuahua” Martinez. The effect is magical. The close-knit ensemble develops harmonic and rhythmic passages from single phrases thrown their way by a constantly inventing and dazzling Herbie Hancock. The result is a record that will be forever considered one of those rare and priceless gems.

Herbie Hancock is a true icon of modern music. Throughout his explorations, he has transcended limitations and genres while maintaining his unmistakable voice. With an illustrious career spanning five decades and 14 Grammy Awards, including Album of the Year for River: The Joni Letters, he continues to amaze audiences across the globe.
There are few artists in the music industry who have had more influence on acoustic and electronic jazz and R&B than Herbie Hancock. As the immortal Miles Davis said in his autobiography, “Herbie was the step after Bud Powell and Thelonious Monk, and I haven’t heard anybody yet who has come after him.” Read more…