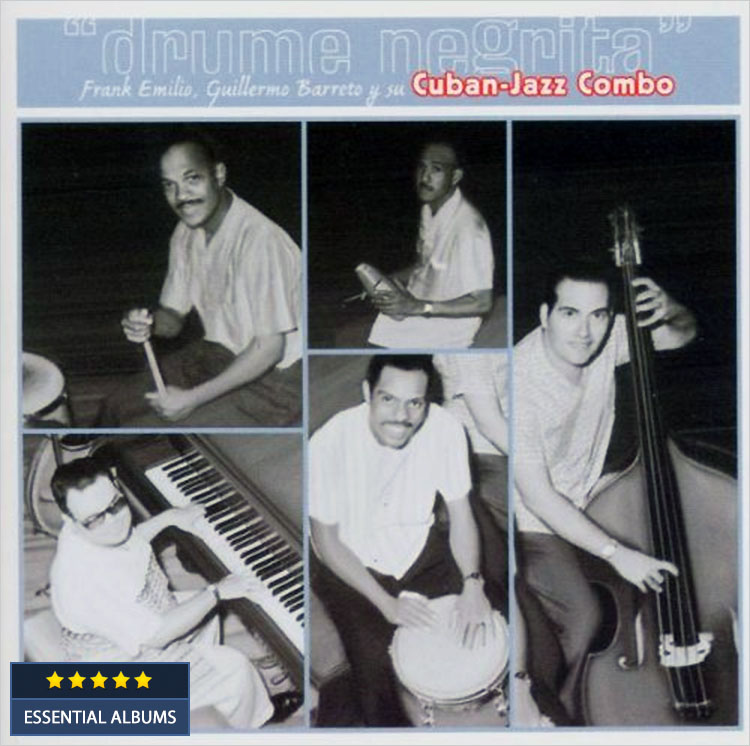 The clave that is pronounced in Afro-Cuban music is almost stealthily present in Jazz and has been lurking secretly in that idiom ever since the music of the Caribbean and the music of New Orleans met… long before even Jelly Roll Morton introduced the “Spanish Tinge” into the music he called Jass. And clave in some shape or form has inhabited both Caribbean and Jazz music ever since. Clave means “code”. No wonder it is hard to spot, but it is always there, wedged together between the music of the Western world and the beating heart of Africa. The Cuban pianist Frank Emilio-Flynn knew the secrets of clave better than most musicians ever to play music. What Dizzy Gillespie did in “Manteca” Frank Emilio did in virtually all of the music he composed and played. The music of Drume Negrita illustrates this in the grand manner.

Frank Emilio-Flynn has a devastating left hand. Among pianists his “tumbao” was something to die for. This can be heard on Ernesto Grenet’s iconic composition “Drume Negrita,” which gives this album its title. After the exquisite romance of the introduction—and with intimations of the grandeur of Afro-Cuban music to come from the fluttering rumble of the tumbadora of the great Tata Güines—the pianist launches into the song’s amorous melody. But Frank Emilio invites his cohort to plunge into the music. Here Frank Emilio is driven by the rhythms of both Tata Güines’ tumbadora and the shimmering chatter of Guillermo Barreto’s cymbals in that heavy African rhythm; a classic exposition of clave that is the key to Afro-Cuban and Black American music as well. That Mr. Barreto is essential to the music, just as the tumbadora is goes without saying. Guillermo Barreto was a terrific drummer, who melded together various idioms in his inimitable statuesque drumming. He is in fine form on Drume Negrita.

There is not a faltering step in any of the musicians on this album. But there are what might be deemed as “favourite” tracks. Chief among them is Frank Emilio’s own composition “Gandinga Mondongo y Sandunga,” a classic by any stretch of imagination. The architecture of the song rises on the foundation of three chords and soars after the first bars. The music retains its spontaneity throughout the song’s evolution, which is sustained by a dazzling display of drumming (on timbales) by Guillermo Barreto. His brushwork on “Habana” is breathtaking in the wickedly swinging passages of the song.

The music of this album is of a sunnier disposition throughout. It is by turns skittish and filled with melodic laughter. It can also be solemn at times when tempi are slowed down to a profoundly beautiful level. Here the tonal language is pushed to the limit. Overall, however, the exuberance of the album provides a sonic feast that is steeped in Afro-Caribbean metaphors as well as those magnificent ones ensconced in Jazz. Another welcome facet of this production is that it appears to be an analogue production, which is also a welcome change from the digitized re-issues. The “live” feel of the music is therefore heightened by this.

When Cuban pianist Francisco Emilio Flynn Rodriguez was born in 1921, forceps damaged his eyesight during delivery, ultimately resulting in total blindness by his late teens. At the age of 13, Flynn participated in and won an amateur contest, starting his career shortly thereafter as part of a danzon orchestra (playing a type of ballroom music that preceded both the mambo and mambo ). Flynn continued to broaden his musical skills by studying at a specialty school run by Cuba’s National Association For the Blind (a school that Flynn would later serve as president from 1978-1981). Read more…

Barreto was born in Havana on August 11, 1929. As a young man, Guillermo was a skilled interpreter of Cuban “pailas”. In the 1940s, he was part of several big bands: the Cabaret Tropicana resident orchestra (directed by Obdulio Morales), the Sans Souci resident orchestra (directed by Rafael Ortega) and Armando Romeu’s orchestra. Soon he was playing his own arrangements and compositions. Between 1943 and 1946, he studied piano under the supervision of Rafael Ortega. This swing background would allow him to take his music into the realm of Afro-Cuban jazz as part of the Quinteto Instrumental de Música Moderna, which he founded in 1958 alongside Frank Emilio-Flynn. He was so highly regarded that during a visit to Cuba by Stan Kenton’s orchestra, Guillermo replaced an ill Buddy Rich for one night’s performance. Read more…