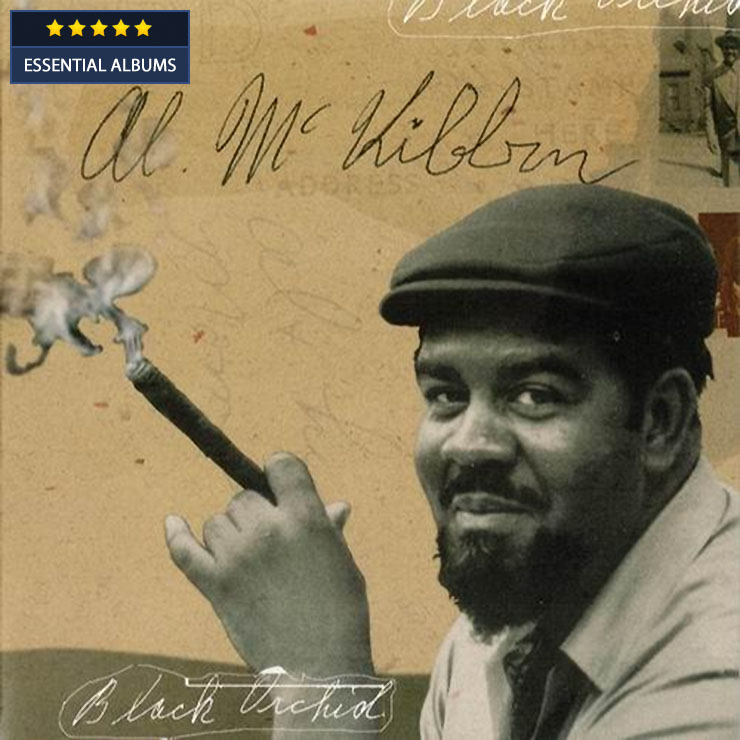 Al McKibbon was one of the finest modern melodic bassists. The fact that he could play with the great Herbie Nichols will testify to that fact. Always wise beyond his time, Mr. McKibbon accompanied many fine musicians including Dizzy Gillespie. He is also one of the finest musicians to interpret the Latin Jazz idiom. Unlike many musicians in New York who strayed into Latin Jazz upon being influenced by the Afro-Cuban and Puerto Rican tinge, Al McKibbon absorbed the music so completely that he soon became one of its finest exponents. Sadly, Mr. McKibbon made only two albums as leader in his long and illustrious career. The first was Tumbao Para Los Congueros De Mi Vida (Blue Lady Records, 1999) and the second was this astounding recording, Black Orchid which was made about a year before he passed away. He was 84 when he made it. His sound—far from frail—sounds as muscular and commanding as ever. His tone is moist and deep, and sharply angled, like rays of brilliant light that emerges from his soul. His notes are plump and magnificently dense with colour. These notes sing and dance as if they were thrust onto an imaginary waxen floor. They leap and pirouette and act as if they were Mr. McKibbon’s paramour; a prima donna, but dances not only for her lover, but all and the performance continues throughout the album.

Black Orchid is a superb album, full of surprise in its dramatic twists and turns. And Mr. McKibbon is at his very best. He plays joyously throughout although his tone is dense, his timbre pristine and his colours dark and beautiful. He plays brilliantly slashing notes that angle across the guitar of Barry Zweig and Frank Morocco’s accordion, the piano of Donald Vega and the flute of Justo Almario and Billy Strayhorn’s “U.M.M.G.” becomes a statuesque architectural marvel. Mr. Strayhorn’s other composition “Isfahan” gets the full Mediterranean treatment, emerging from a marvelous palette of colour; its density bringing the beguiling souk to life. Here Mr. McKibbon is magisterial with his flashing and viscous colours splashed on a tapestry of earthy tones and magnificent colour. He makes “Black Orchid” sound dark and mysterious; His version of “Little Niles” is joyous and masterful. “Ode to Billie Joe” is touching in its elegiac manner. “Tres Palabras” is magical; a beautiful bolero that shows how deep and mystical the voice and the svelte the bass of Mr. McKibbon can be. “Monsieur Phillipe” is simply beautiful and paints a masterful portrait of its subject. The only composition that the bassist brought to the date is a blues, “Big Al’s Blues.” It is a song that is exquisitely melancholic.

Mr. McKibbon had, very early in his life, developed a magnificent tumbao—a melodic bass line with a deep reverence and an impeccable sense of time that was the envy of many bassists. This is on display throughout the album. Ironically this served him well for both his jazz and Latin Jazz idiomatic playing. It is what recommended him to Herbie Nichols in 1955 and continued on until 1956. It is also what brought him to the attention of Cal Tjader. Mr. McKibbon continues to be sorely missed in both worlds.

In 1947, after working with Lucky Millinder, Tab Smith, J. C. Heard, and Coleman Hawkins, he replaced Ray Brown in Dizzy Gillespie’s band, in which he played until 1950. In the 1950s he recorded with the Miles Davis nonet, Earl Hines, Count Basie, Johnny Hodges, Thelonious Monk, George Shearing, Cal Tjader, Herbie Nichols and Hawkins. McKibbon was credited with interesting Tjader in Latin music while he played in Shearing’s group.

McKibbon has always been highly regarded (among other signs of this regard, he was the bassist for the Giants of Jazz), and continued to perform until 2004. In 1999, at age 80, he recorded his first album in his own name, Tumbao Para Los Congueros De Mi Vida (Blue Lady Records), which was nominated for a Grammy for Best Latin Jazz Performance. McKibbon’s second album, Black Orchid (Niche Records), was released in 2004. He also wrote the Afterword to Raul Fernandez’ book, Latin Jazz, part of the Smithsonian Institution’s series of exhibitions on jazz.