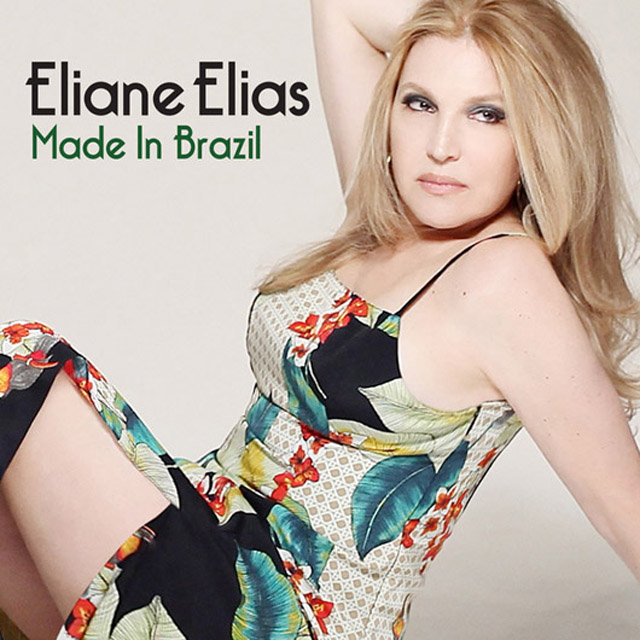 The pianist, Elaine Elias who has since she made her presence felt on the world stage, striven to bring Brasilian music to a new high. She has used all of her terrific pianism rooted in the Brasilian idiom to do this. Elias has always been one of the most attractive pianists to listen to. The sensual rocking of her lines has brought to life all of the suggestive dancing that lures you into a beautiful stupor. Her playing is sometimes suggestive of a whisper in the ear of the listener with lips fluttering so close that you can almost feel them. I cannot think when I last heard a pianist who brought Brasilian music so close to the trembling nerves of the body. Listening to (and watching) her fingers caress the keys of the piano is quite another matter altogether.

And now Elias is in the process of reinventing herself as a vocalist. Bossa Nova Stories (2008) was the first time that she made clear her intentions. Now, with Made in Brazil (odd that she should spell Brasil with a ‘z’ though), Elias is looking not only to further her cause, but cement her reputation as a Carioca worthy of widespread recognition. The record is already winning accolades in industry circles, but does she make the cut? Being nominated for a Grammy need not necessarily be a measure of how great an album is, or at least how much it achieves its intentions. After all it is after the first blush that a performance starts to become enduring; after the songs echo in your head demanding that they be heard by the inner ear.

This is exactly how Made in Brazil must be approached. The beckoning cover and the silken charm of its protagonist’s vocals are a barrier that is easy to cross. Covers don’t always sell records although they might do sometimes. But this is not why you should definitely buy Elias’ record; why you should fall in love with her. The reason is this: Eliane Elias’ music is where the heart beats. Its palpitations are caused by Elias’ voice this time and not her piano. There is a much greater urgency in the music. A greater desire to beguile and consume the spirit of the listener in a most opulent manner. Perhaps you might attribute that to the strings that accompany some of the music. It seems throughout the record that the strings are ubiquitous for some reason.

But to return to the reason that makes this record desirable is the fact that Eliane Elias does in fact have a voice to die for. She releases pent up feelings of both despair and joy and longing with extraordinary feeling and barely discernable coloratura in which a voice as husky and beckoning can make utterly irresistible. Her voice, gloriously descending to interpolating low Cs below the stave moves fast then slow, always dazzles the senses. Her exuberance is fetching; almost Lolita-like. This is beautifully suggested in her dialogues with Roberto Menescal. These are often reminiscent of that iconic session that brought Antonio Carlos Jobim together with Elis Regina – Elis & Tom (Verve, 1974). To that end, the inclusion of Aguas De Março may not be such a coincidence.

Still Made in Brazil hits the mark on much of the repertoire and Você is a prime example of why the performance does much to seal Elaine Elias’ reputation as a vocalist. It would be interesting to see what Elias does next to provide equal weightage to piano and vocal chords. I’m quite sure that record is not very far off.

There’s no question about it: Seven time GRAMMY® Award Nominee, four time “Gold Disc Award” recipient and three time winner of “Best Vocal Album” in Japan, #1 artist in sales and radio in France, with all recordings reaching top five on USA Billboard Jazz Charts, Jazz radio charts, and several reaching #1 on iTunes and Amazon.com to name a few accolades, Eliane Elias has taken her place in the pantheon of music giants. She has sold over 2 million albums during the span of her career. Read more…