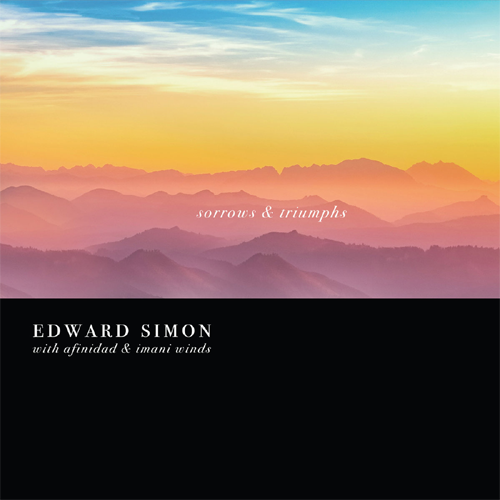 Despite drawing from a deep well-spring of complex abstraction and profound spirituality, the music of Edward Simon is eminently accessible. Moreover, even with the myriad of suggestions in a title such as Sorrows & Triumphs the repertoire of the album is infinitely uplifting. This is entirely due to the fact that Mr. Simon’s music appears to come from a place where the heart beats, so even when he is unravelling the tenets of Buddhism or untangling the complex helixes of numerology, there is a quintessentially living, breathing and therefore utterly human aspect to his music that everyone can relate to, no matter whether you can count the beats in a bar, or tap your feet and click your fingers to the pulse of his extraordinary melodies.

And they are incredibly beautiful songs at their heart. Each is driven by dazzling pianistic asides that pierce the mindstream like bolts of pure sunshine. Each little phrase teased out of a repeated triplet – on “uninvited Thoughts”, for instance – radiates from the solid, rocking melody like a corona emerging from its centre as if from the nuclear furnace of the sun. There is another aspect of this music here and you feel it as in the melting continuity of melody, harmony and rhythm. For example as that song empties itself into the quietude of “Equanimity” Gretchen Parlato enters the proceedings with lyric poetry of her own, letting the “wordless” whispers and husky syllables and liquid diphthongs leap to each new drum-stop, Brain Blade melting easily into the near nude beauty of the melody.

Some of this music may have been heard before – when it was premiered in 2009 in Arkansas and not long after at the Jazz Standard. But here, in the hushed ambience of the studio it seems to have new meaning as Mr. Simon leads the ensemble he calls Afinidad together with the Imani Winds into re-shape the long inventions of “Triumphs” (a version of which has been captured in the video below). Together with saxophonist David Binney, Scott Colley and Brian Blade, and Rogerio Boccato, the sounds and silences are born again, sacred spaces resonant with creation. A note here and a note there breaks through the sculpted whole echoing into existence from the cosmic void, delivered, as if long after being nurtured in the pregnant silences of the past.

Again, the Imani Winds, comprising virtuoso players – Valerie Coleman, Tovin Spellman-Diaz, Monica Ellis, Mark Dover and Jeff Scott – and Afinidad all echo the artistry and vision of Edward Simon as the music is borne on intricately sculpted phrases. Each is fashioned from notes and chords that sing and dance the interminable dance of living beings; the musicians who bring each black dot to life, enabling it to leap off the staved paper. Through it all, Mr. Simon maintains control, always facilitating an enactment between the silence of emptiness and (the) structure (of song), the latter of each piece keeps opening us to the moment.

Again, each moment accepts whatever, every moment of ecstasy, in the music, as in each invention by Mr. Simon and Mr. Binney melodies loosen – and tighten because rhythm (with Mr. Blade and Mr. Colley is present in all places yet not attached anywhere. Clearly this is an album like no other – not even one that Mr. Simon; himself may have produced in the past.