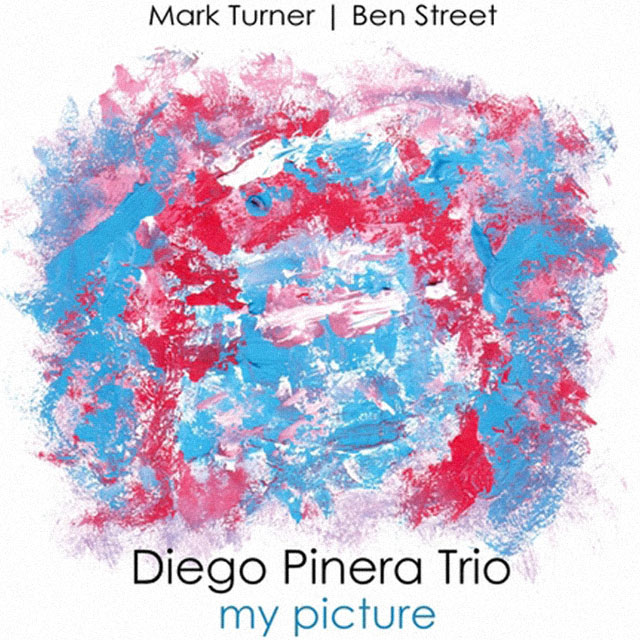 Diego Pinera’s drumming always seems informed by a composer’s instincts and sensibilities, attributes immediately discernable in his new (March 2016) recording combining his percussive genius with those of Mark Turner’s and Ben Streets – who form the triumvirate the latter two of whom a pair of exquisite musicians who instinctually bond with Pinera’s compositions. Even in the two pieces not written by Pinera but by Thelonious Monk and Kern and Hammerstein, the seamless bonding of the three creates a unique spatial geometry that comes from an almost spiritual unity between members of this trio.

And even though this is Diego Pinera’s record first and foremost, out of this richly atmospheric performance, spellbinding trio music emerges in pieces which are almost cinematically graphic. One easily hears eddies of mysterious winds blowing in to the Open Window and the mad angularity in My Picture and The New One, seemingly connected. The raw emotions of the music are immediate and powerful. And the trio deliver flawless performances of Evidence and The Song is You. But this music -thanks to the constantly shifting pulse and itinerant drama of Pinera’s drums, Mark Turner’s tenor and Ben Street’s epic basslines- create an emotional nakedness painted vividly with loving attention to detail. This makes for a riveting recording.

The probing, questing intelligence is brought to bear on this unconventionally virtuoso music of Pinera. To music that often leaves one giddy and rudderless and gasping for air in wave after wave of opulently and deliberately ambivalent harmony. All three musicians, led by Pinera, bring orientation and direction without sacrificing sensuality and mystical aura. Pinera accomplishes this through an almost uncanny variety of touch, tone production and delightfully complex rhythms. The result is music of audacious originality. The irrepressible nervous energy animating fast sections of the works becomes both the means and the end. Through shaping and dynamic gradation these musicians restore characteristic shimmering vibrando effect, producing sound at once musical and thrilling.

Shape and direction are the operatives throughout the album creating an impact unlike any other recording I know. For me discs warranting the highest praise are those that persuasively introduce new music that chart new interpretative territory for a work of that demonstrate something fresh and heretofore unrecognised in music long familiar. This is one such recording and it has a ring of authentic rarity that will sound in the mind’s ear for a long time to come.

Track List: Open Window; Cuidado; New Hope; Evidence; Today; Bart; My Picture; The New One; The Song is You.