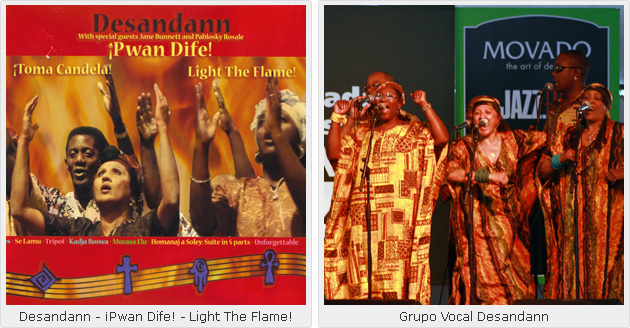 Thanks to their greatest champions outside Cuba, Jane Bunnett and Larry Cramer, the extraordinary ten-person vocal ensemble, Desandann has returned after a decade with their second, spell-binding album, ¡Pwan Dife! (Light The Flame!), which features Jane Bunnett and Pablosky Rosale. The album was recorded on the back of Bunnett’s brilliant, Juno award-winning album Embracing Voices, (EMI/Sunnyside Records, 2008), which was set around the ensemble as they played counterpoint to Bunnett’s soaring flute and soprano saxophone. While Bunnett’s album was a slight departure for Desandann and explored the soulful and twirling mixture of jazz and Afro-Haitian sounds, ¡Pwan Dife! returns the group to the aural landscape that celebrates the legacy of Haitian music in Spanish and Creole.

The repertoire on the album gives free rein to the human voice and the celestial manner in which the soaring soprano voices meld with the altos and the earthy colors tumble down as the tenors enrich the vocal canvas. Then there are the riveting basses that weave the vocal tapestry together with the clear growl of command. Together the fine female and fine male voices navigate the dense harmonies and intricate intertwining call-and-response and contrapuntal structures with perfect control of emotion and musicality that sets Desandann apart from any vocal group in any form of music today. Their fluid orchestrations throughout may even make chamber and symphonic choral groups blush with envy.

Although best experienced live where their physical presence casts a hypnotic spell on the rapt audience, their vocal gymnastics conjure the slow grind of hips and swaying bodies as if they were in the room itself. The earthy echoes of percussion woven together with hand-claps on classic renditions of “Sinbi,” “Papa Danbala” and “Tande” pulsate to the rhythm of the heart-beat. On the latter, Pablosky takes a stellar turn with a truly memorable tres-guitar solo that burrows into the mind’s inner ear and delights the senses. Just how much can be achieved with a mere four strings by Rosale’s unbridled versatility and soul-stirring emotion is a wonder each time he makes an appearance, no matter how brief. On the prancing, “Baila el cha cha cha” Jane Bunnett returns the favor with some celestial pyrotechnics on flute as she returns the favor that Desandann bestowed upon Embracing Voices.

The album also features two memorable rendition of classic repertoire: “Les Feuilles Mortes,” better known in its many English incarnations as “Autumn Leaves.” Desandann turn Serge Gainsbourg and Joseph Cosma’s classic into a timeless piece of pitch-perfect music. The harmonic leaps here are outstanding and serve as a reminder of how fresh an old song can be remade once infused by genius. The other surprise is “Unforgettable,” a song made famous by Nat “King” Cole. On their hair-raising version, Desandann breathes the softest of emotions into the lyrics as they unfold with not a dry eye in the house. Despite the even brilliance of the album there might just be a case to single out “Homanaj a Soley: Suite in 5” for the sheer mesmerism of the voices as they navigate complex changes in rhythm.

¡Pwan Dife! is an important addition to the literature of vocal music in any idiom or cultural Diaspora. This is an album that deserves repeated listening as it pushes the boundaries of harmonic excellence into a virtually supernatural realm.